Observing conditions were never going to be good for the 2015 Quadrantids with maximum due to occur only 28 hours before Full Moon. Hence observers would have to contend with a bright Moon high in the sky and this would drown out many of the meteors.

However, with the narrow Quadrantid peak predicted to occur at around Jan 4d 01hUT and thus during the hours of darkness from the UK, it would still be worthwhile for UK based observers to attempt some observations.

A weather front had passed southwards across the UK during Jan 3rd. It had cleared most areas by the late evening but was still affecting southern England. Some patches of cloud did affected other areas and there was a high risk of fog forming in many areas.

Tony Markham observed visually from Leek, Staffs between 00:14UT and 01:10UT (LM 4.0), with 16 minutes being lost to cloud. He saw 1 Quadrantid and 1 sporadic meteor in the remaining 40 minutes before the fog rolled in. Alastair McBeath observed from Morpeth, Northumberland, carrying out a number of watches totalling 1.17h between 22:20UT and 02:05UT (LM 4.8-4.9) and saw 2 Quadrantids and 3 sporadics. Observed rates in both watches were clearly low – primarily due to the lowish radiant altitude at the time and the bright moonlight. 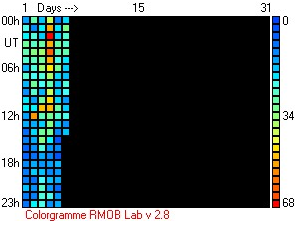 Radio observations are of course unaffected by moonlight.

Bill’s results for early January are shown in the plot to the right. Each vertical column on the graph corresponds to a day of the month. Blue squares signify the lowest activity; Red squares designate the highest meteor counts.

This method does not differentiate between Quadrantid meteors and other meteors but it can be clearly seen that the number of meteor detections was significantly higher during the early hours of Jan 4th.

Imaging also tends to fare better than visual observing in bright moonlight. Not only do cameras tend to be less affected by the glare of the Moon, they are also obviously more “tolerant” of the lower observed rates on offer.

Richard Fleet‘s video cameras at Wilcot, Wiltshire imaged a bright fireball at 02:26:57UT on Jan 4. Richard notes it to have been several times brighter than Venus. Although not actually a Quadrantid, the video http://vimeo.com/115898414 is certainly worth a view!

Bill Ward was also able to capture a number of Quadrantid spectra, including the two whose synthetic spectra are reproduced below (synthetic spectra generated by using software to generate a colour representation of the spectrum based on the intensities of the lines in the original  black & white image).