It’s an unfair world. All through the winter and spring the nights have been dark but it’s been sooo cold. Now that the weather is getting warmer what happens? It hardly ever gets dark, particularly in Britain. You have to wait up till at least 10.30 pm in June to see any stars at all. And then you can hardly recognise any of them because they have changed totally since winter.

So that’s where we come in. Use our easy-to-follow sky guide and you’ll be out there stargazing in no time. Mind you, even June nights can get chilly, so don’t catch your death of cold and make sure you put something sensible on. Don’t worry, no-one can see you. 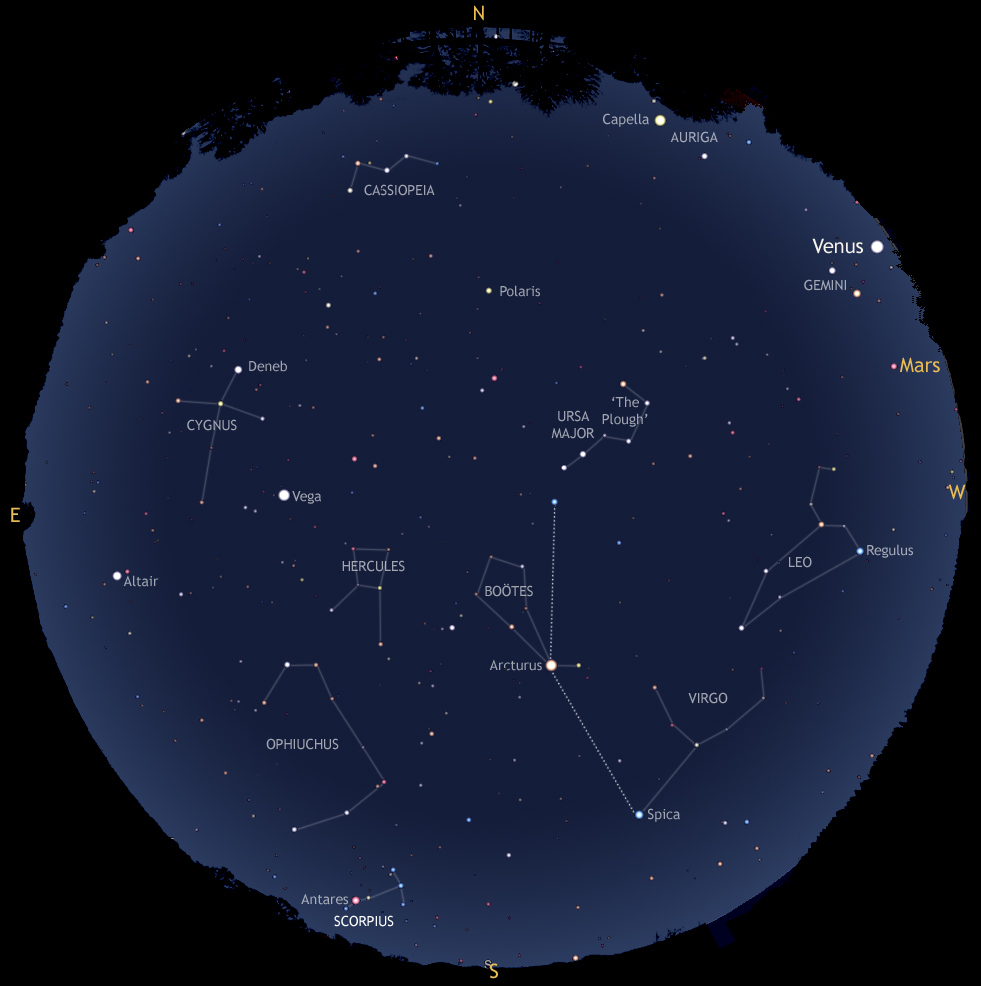 Now don’t write in and tell us that we have the points of the compass all wrong. This is a map of the sky, so you have to hold it over your head. When you do this, east and west will be the right way round.

It shows the whole sky, so the scale is quite small. Normally you turn to see different parts of it, so to see the view looking north, for example, hold the map upside down with north at the bottom. OK, smartie, so you can’t hold the computer upside down.

The map shows the sky in mid June at about 10.30 pm, at the start of the month at 11.30 pm, or by the end of the month at 9.30 pm, though at this time of year the sky is too light to see anything at that time. All times are BST (Daylight Saving Time).

If it all looks just like a lot of dots, and drives you dotty, here’s the way to get to grips with the sky. Start with something familiar and work from there. Most people recognise the seven stars that in the UK we call the Plough and in the US is called the Big Dipper. If you can’t find it, it’s because you aren’t looking high enough – it’s almost above your head at this time of year, so it’s shown at the centre of this map.

If you think of the Plough as a saucepan, then follow its handle round towards the horizon, you first come to a bright star called Arcturus. Keep going and you come to Spica, the brightest star in Virgo.

Now use the map below to find more patterns nearby, but don’t expect to see those convenient lines helping you to see the patterns. If you do see them, consult an optician or give back those glasses your friends gave you on 1 April. 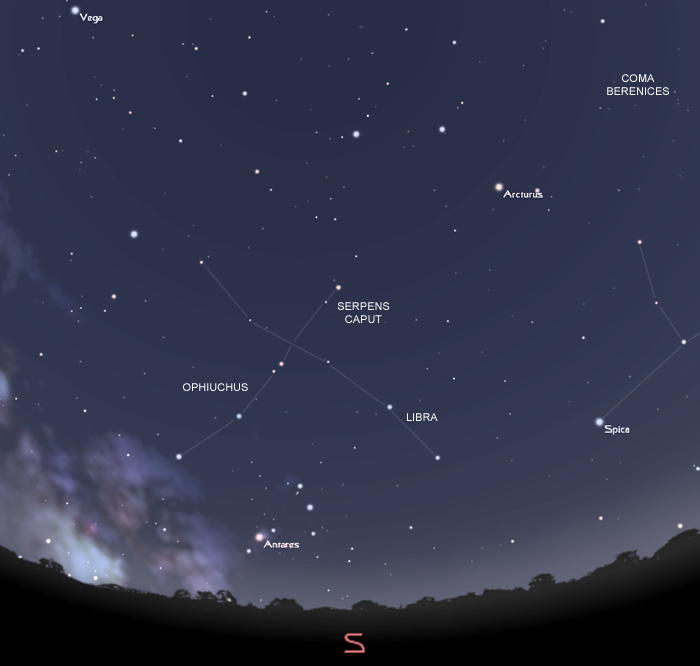 Look for Leo, which is to the right of Virgo. Then just above the tail of Leo is a faint but interesting constellation called Coma Berenices, which is always worth a look. In city skies you won’t see it at all, but use binoculars and you’ll spot a whole mass of stars, forming a star cluster.

To the left of Virgo are two stars which are the brightest in Libra. Now use these to pick out a giant cross in the sky, as shown on the map. This will help you to pick out the stars of Serpens Caput, the head of the serpent, and Ophiuchus, the Serpent Bearer.

Below Ophiuchus is Scorpius, the Scorpion, with the reddish star Antares marking the creature’s heart. From the UK we don’t see the whole of the scorpion’s tail, which is below and to the left of Antares, but we can see its claws, marked by three stars to its right, towards Libra.

If you’re wondering about what looks like clouds or smoke at the bottom left, that’s the Milky Way putting in an appearance. Most of us never get to see it because of light pollution, but if you get a really clear and dark sky it really does look like bright clouds.

For a map with all the constellation names on it, click here.

The only planet on our map this month is Mars, which you can see low down over to the north-west. Really it is a sorry sight at the moment compared with how it looked last autumn, when it was really close to the Earth. We have moved away from it in our orbit, leaving it behind, so now it is tiny and quite faint, as planets go. Even through a large telescope you can only see a tiny little disc, not showing much detail. But at least you can say you’ve seen it, and look forward to next year when it will be close to Earth again and a fine sight in a telescope in November and December. Venus is not far from Mars, but it’s not shown on the map because it is so low in the sky at the time our map is for. You need to get out around half an hour after sunset and look into the twilight. Although it’s a bright planet, the sky itself is quite bright at that time of night as well so it doesn’t look very spectacular. It too is a bit of a disappointment through a telescope, because it’s still on the far side of the Sun and is quite distant, although it appears over twice as large as Mars. Jupiter and Saturn are in the morning sky, and have risen by about 1 am. If you are up for some reason about 3 am you’ll see them both down in the south-east, quite bright and some distance apart. They’ll be in the evening sky in a month or two, so don’t give up on them. Mercury is too close to the Sun to be seen this month.

Why does the Moon look big?

This is the time of year when the full Moon, on the 24th, appears very low in the sky. The Moon also looks almost full on two or three days on either side of the actual date. You will probably think it looks bigger than usual, particularly as it stays closer to the horizon for longer than it does in winter, but this is just an optical illusion. If you don’t believe us, try measuring its size against a ruler held at arm’s length, then measuring it again when it’s higher in the sky.

So why does it appear bigger? It’s nothing to do with the atmosphere acting as a lens – it doesn’t. There are all sorts of theories, the most likely being that your brain compares it with objects such as houses or trees in the foreground and realises that because it is behind them, it must be bigger. Some people find that if they look at the Moon by turning away from it, bending over and looking at it through your legs, so you don’t recognise the foreground as much, the illusion disappears. Unlike all those experiments where they say ‘don’t try this at home’, you may want to wait until there is no-one else around before attempting this one. We have a whole section of this site about the Moon and what to observe, so do take a look. No lunar eclipses this month, but there is a…

This takes place on Thursday, 10 June. Solar eclipses occur when the Moon moves in front of the Sun, blotting out some of its light. But don’t be fooled – the Sun is still incredibly bright so don’t take any chances in observing it. We’ll have a news story giving full details of how to observe safely, but basically the eclipse starts some time after 10 am, is at its maximum around 11:15, with a small bite taken out of its upper edge, and is over by 12:30.

OK, you’ve read all this for nothing, now comes the plug. This page is brought to you by the Society for Popular Astronomy, which is a really great society to join. It’s based in the UK but there are members in other countries as well. It doesn’t cost much to join, and there is a special rate for Young Stargazers. At least take a look at what we have to offer.