Auriga is a really great constellation, though not nearly so well known as its neighbours like Orion or Gemini. But it has a lot going for it.

The name is simply the Latin for ‘Charioteer’, but there’s no agreement which Greek myth is actually represented. Perhaps he just came in handy whenever anyone wanted to get somewhere when telling tales using the stars – just like you might write a taxidriver into the script if you were writing something today. But there are tales about charioteers, and you can read about them on Ian Ridpath’s Star Tales site.

Auriga is usually seen in the sky as a pentagon of stars, with Capella at the top. But the bottom star of the pentagon, El Nath, is actually in Taurus and is merely borrowed to make the pattern.

But the really odd thing about Auriga is that he is always lumbered with a goat around his shoulders. You can imagine him picking up a fare and having to say ‘Don’t mind the goat’. To make things worse, this goat has had kids which he is also saddled with. These are known as the Haedi, and they are visible up there in the sky, next to the main star, Capella.

You can see the Haedi next to Auriga, and many people regard all three stars as the kids. In fact there were only two kids, the lower pair, but the upper one, Epsilon, makes such a distinctive group with them that it’s often regarded as an honorary kid. 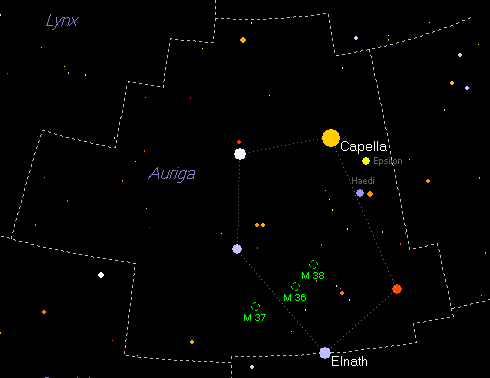 For hints on understanding the star map, please click here

Things to look for in Auriga

Auriga contains three really nice little star clusters, M36, M37 and M38. You can see them in the picture at right as three fuzzy patches. If you’re wondering why they seem to be named after motorways, the M actually stands for Messier (that’s pronounced ‘Messi-ay’, as in French, by the way). Charles Messier was the one who originally numbered them. But he didn’t work from left to right, because M36 is the one in the middle. You can see these clusters with binoculars if your skies are fairly dark, though not from the middle of a town.

If you are having trouble seeing them as actual clusters, try to hold the binoculars really still, and you might see the individual stars. A telescope shows the stars easily. You should be able to see slight differences between them. M36 is bright but small, M37 has more stars and M38 is largest. They aren’t the brightest clusters around, but you get three for the price of one, That’s even better than buy one, get one free.