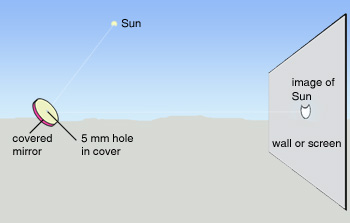 Because the Sun is extremely bright, looking at it, even when the Moon is in front of it during a partial eclipse, can damage your eyesight. But this doesn’t mean that you can’t watch the eclipse. Mirror projection works very well.

This is one of the best and simplest methods of watching the progress of the eclipse, particularly in a classroom, because lots of people can view it at the same time. You need a small mirror and a means of placing it in the sun so that it reflects the sunlight into a room where you can view it on a wall or some sort of a flat screen. The mirror must be a flat (plane) mirror, not a convex one that gives a magnified view when you look into it.

The only other requirement is some way of masking off most of the mirror leaving just a small hole. This doesn’t need to be anything more elaborate than a sheet of paper. All it has to do is to cover the whole mirror. The hole doesn’t need to be circular. Just to prove the point, make it anything other than circular, such as a triangle. It needs to be no bigger than about 5 mm across. Actually, a smaller hole, about 3 mm across, gives a sharper but dimmer image, so experiment with different holes to suit the brightness of the room you’ll be using.

The mirror needs to be in direct sunlight. Ideally it needs to be outside, rather than seeing the Sun through a closed window, but an open window should do. An adjustable clamp, of the sort used in chemistry labs, is a good way to hold it in place, but you could just prop it up. Remember that the Sun will move through the sky during the event, so you may need to reposition it from time to time.

It’s best if the light from the mirror reaches the screen at right angles, or you’ll get a distorted image of the Sun. The Sun will be in the south-east during the eclipse, so you’ll get the sunlight on the east and south sides of a building and windows facing in either of these directions will get the sunlight. You may need to angle your screen so that the mirror is at right angles to it. It may be easiest to project the image onto the ceiling, but the solar disc will not be circular.

A projection distance of 5 metres gives an image of the Sun just over 5 cm across. This depends only on the distance, not on the size of the hole. In a bright room, you might need to use a larger hole to get a bright enough image, but the image will be more fuzzy.

As you watch, you’ll see the image moving as the Sun moves through the sky. You will be able to see the progress of the eclipse as well, upside down as viewed in the sky. When the Sun is a thin crescent, other shadows in sunlight will start to look a little odd as well, with one sharp edge and one fuzzy as usual. See if you can spot the difference.

Also notice how the Sun’s image moves slowly, as the Sun itself moves through the sky. If you left the mirror in place, you could use the position of the image as a sundial – but for reasons it would take too long to explain right now, each day it will be in a different height on the wall and most of the hour lines will be at an angle to the vertical.