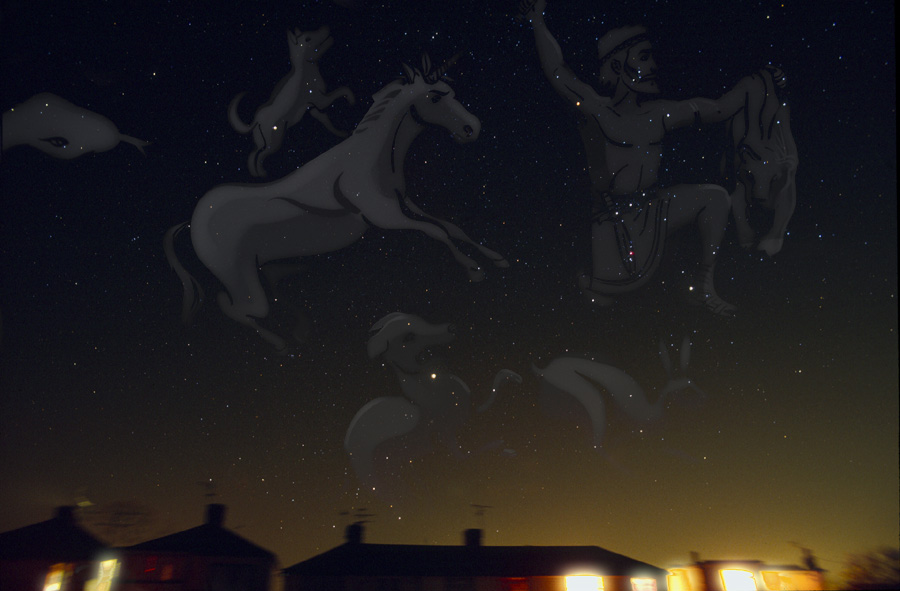 Stargazing is fun, but learning the constellations can seem a bit daunting. Even in a light-polluted sky the stars are dotted all over the place, and out in the country there are just thousands, or so it seems. And to make things worse, the sky moves from hour to hour, and from month to month, so the ones you learned might have shifted the next time you go out. Yet to find any of the interesting objects, you need to be able to recognise the constellations, or star patterns. No wonder people buy those ‘go-to’ telescopes that will find objects for you.

But actually, it’s not all that difficult to learn the sky well enough to be able to find those celestial lollipops with your binoculars or even in a good sky, the naked eye. Follow our step-by-step guide to finding your way among the stars, frolicking through the constellations, dancing along the Milky Way… well, perhaps not to start with.

Step 1 to learning the constellations

First step is to get your bearings. We’ll assume you are in the northern hemisphere for this, and more specifically in the UK or at similar latitudes (including most of Europe, the northern US and Canada). You need to know where north is, because the north pole of the sky is a sort of pivot around which everything rotates*. A fairly bright star just happens to be very close to this point: you’ve guessed it, the Pole Star, or Polaris. The great thing is that once you’ve found Polaris from your location, it is always in the same place in the sky, no matter what the time of day or the season.  So go outside and find north – that’s opposite the direction of the Sun at noon – and look for the stars in that direction.

The stars surrounding Polaris are also always in the sky, though they rotate around it. The two main constellations you are likely to see are Ursa Major – better known as the Plough or (in the US) Big Dipper – and Cassiopeia. The Plough is probably the most recognisable group of stars in the sky, and it features on the SPA’s logo. It really looks more like a saucepan, but our country ancestors were more familiar with a wooden plough. But whatever you call it, because it moves around Polaris, you might have to search for it. It’s near the northern horizon on autumn and winter evenings, but in early spring it’s higher up and to the right of the Pole Star, standing on its handle. In late spring and early summer the Plough is overhead, while in later summer and early autumn it is to the left of Polaris.

When you have found the Plough, notice that the two stars at the right of the pattern point up to Polaris – well, with maybe a bit of cheating. Continue the line and you come to Cassiopeia, whose five main stars form a W. The Plough and Cassiopeia continually circle Polaris, so you should always be able to find one or the other.

* When we say that everything rotates, of course it’s really the Earth that is spinning once a day and also orbiting the Sun. These two motions produce the apparent rotation of the sky, hour to hour and month to month. But rather than keep on saying ‘apparent’ we just refer to the rotation of the sky, or what is known as the celestial sphere, as if it is rotating around a stationary Earth, as it’s much easier to visualise.