If you’re interested in astronomy, it stands to reason that you need a telescope, and the bigger the better. But for most of us, there’s a lot of research to do before you can make the plunge.

There is a bewildering range of instruments available, but the good news is that there are some excellent telescopes out there, at very reasonable prices.

And if you’re just starting out, you might well have a good beginner’s instrument already – a pair of binoculars. Even small binoculars will show you a wide range of objects in the sky much better than you can see them with the naked eye,  and even in city skies they can help you find whole constellations that are otherwise hidden in the light pollution. We’ve a separate article on binoculars and using them, so check that first.

But although beginners are often advised to start with binoculars – and even advanced amateurs wouldn’t be without them – you are probably going to want a telescope as well. This is fair enough. Even super-duper binoculars have their limitations, and when it comes to viewing the planets and the vast majority of nebulae, star clusters and galaxies, you can’t do without a telescope.

What can you see?

Let’s get one thing out of the way to start with. Forget those glorious photos of colourful nebulae, sparkling star clusters and gorgeous galaxies. There’s no telescope ever made that will show the same amount of colour and detail in faint objects that photographs can reveal. Our eyes are just not sensitive enough to faint light, and although telescopes can make objects much more easily visible, even large ones can’t pour more light into your eye than the laws of physics allow. Ye cannae break the laws of physics, captain, as someone once said. 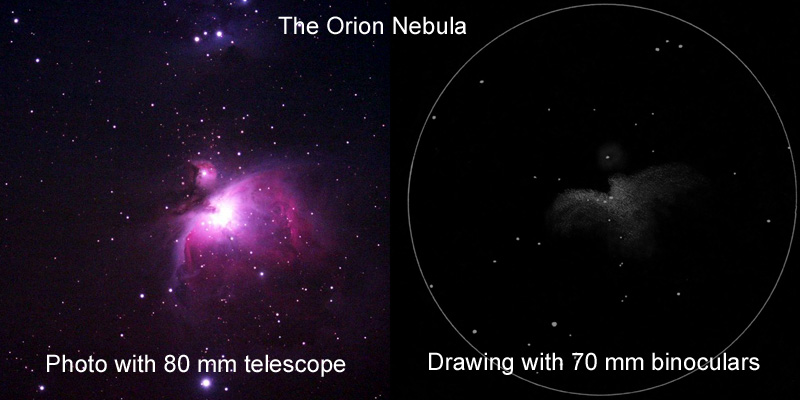 So what’s the point? Seeing those objects for yourself, with your own humble telescope in your back garden, gives a real thrill. The Andromeda Galaxy may appear to be a fuzzy oval of light rather than a dramatic spiral, but you are seeing with your own eyes light that has been on its way for some 2½ million years before it reaches you. And there’s also the fun of finding the objects for yourself that up to now have just been photos in books.

And for bright objects, such as the Moon and major planets, the view through a telescope is much more real than anything you can see in a photo. The Moon becomes a true world, full of mountains and features that you can explore, with brilliant highlights and deep shadows. Jupiter’s belts and moons, ever changing position, and especially Saturn’s famous rings, can be breathtaking.

It’s easy enough to say ‘the larger the better’, and the fact is that a larger telescope will show you more than a small one. We define a telescope’s size by its aperture – that is, the size of its main mirror or lens – rather than by its length or magnification. Telescopes start at about 60 mm aperture (2½ inches), and even these will show you a wide range of objects, but if you can afford something larger you will enjoy better views. Around 100 mm is a good size, and there are many reasonably priced 130 mm telescopes on the market these days.

Once you get to sizes larger than about 250 mm you are into seriously large telescopes, though you can get off-the-shelf instruments considerably larger than that.

As well as gathering more light and giving a brighter image, the larger the telescope, the more detail it can show. This is known as resolving power. The standard way of testing this is to look at double or binary stars – stars which consist of two individual stars close together, usually in orbit around each other (though usually taking hundreds of years for a single orbit). Stars which appear single in a small telescope are resolved into doubles in a larger one. And with a 60 mm telescope no amount of magnification will show the gap in Saturn’s rings called the Cassini Division, for example, whereas with a 100 mm telescope it is usually obvious. The Earth’s unsteady atmosphere also limits the visibility of fine detail, so you need to get steady conditions to make the most of larger apertures and their improved resolving power.<

Bear in mind that virtually all astronomical telescopes give an inverted image – that is, upside down. This is the simplest way to produce an image, and to bring it the right way up requires extra lenses, which not only absorb a little light but can add slight distortion to the image. Astronomers get used to this but it does make it harder to find objects in the sky as the view is always upside down compared with the map. You can get what are called erecting prisms to bring the view the right way up, but astronomers rarely use them. With many telescopes you also get a mirror image – so the view is back to front as well as upside down! Talk about making things difficult!