A new transient object has appeared in the constellation of Perseus, with the most recent observations putting it at magnitude 6.2. This is the brightest nova-like object to appear in the northern hemisphere of the sky since 2013. The object is not far from Capella, in Auriga, which is best seen in the late evening sky.

The nova is in the same position as the variable star V392 Persei, a U Geminorum-type variable with a normal range between magnitudes 14.1 and 16.9. These close binary stars are also known as dwarf novae, and vary in brightness as material from one star falls onto the other.

This particular star is normally around magnitude 15, though it experienced an outburst to mag 13 in 1999. However, an outburst of the size shown by this star is unprecedented. 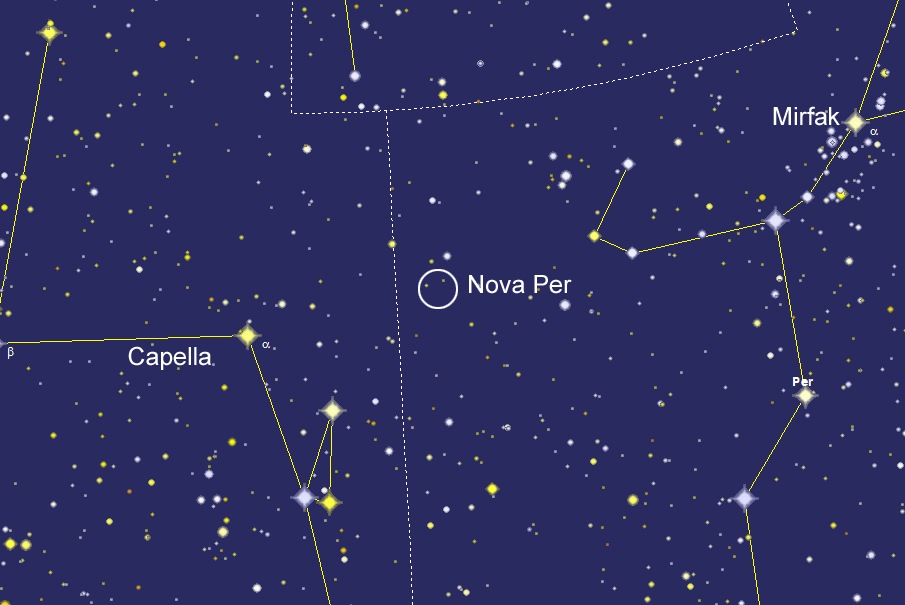 The nova appears to be declining fairly rapidly in brightness. Estimates published by the Central Bureau for Astronomical Telegrams on CBET 4515 give values around mag 7 around 9 pm BST on 30 April, and estimates by SPA members Tracie Heywood and Bob Steele at around 11 pm BST give 7.3 and 7.2. Tracie has provided a link to an AAVSO chart for V392 Per that gives comparison stars in the area.

Visual reports from the AAVSO show the nova to have faded to about magnitude 8.9.

The photo below, taken at 23.30 BST on 7 May, shows the object (arrowed) with nearby stars in the area and a chart for identification of the object. The star immediately to the left of the nova is magnitude 9.3.