Taurus is a fairly large constellation in the northern sky, slightly above and to the right of Orion.

You might need to stretch your imagination a bit, but Taurus represents the Bull. He can be seen charging towards the Gemini twins, but they are safe on the other side of the Milky Way. Nevertheless, Orion rises up to the challenge and prepares to fight the Bull with a club raised high in the air. Further away are the Seven Sisters. They watch the bull from a distance, staying well away from the beast to avoid attack.

The tale behind Taurus is quite similar to the story of Cygnus, the Swan. Most people think of Zeus as being trustworthy and loyal. In reality, he was a bit of a ladies’ man.

This time, it was a girl called Europa. She was happily playing on a beach with her friends when she noticed a herd of cattle rushing towards her in the distance. Zeus had shape-shifted into a bull, believing that he could abduct her if there was a big enough distraction. Zeus had ordered his son Hermes to create the stampede, which would fit in nicely with his current animal form. When the herd of cattle went across the shore, Europa was able to cling onto Zeus, saving herself from being crushed.

The bull then headed out to sea, where Europa was forced to hold on for her life. She soon realised that it was no ordinary bull, and later found out on the Island of Crete that it was in fact Zeus. After about a week, Zeus was able to seduce her. What happened next is probably best left unsaid.

Things to look for in Taurus 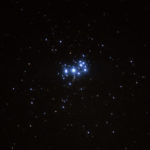 Aldebaran is a bright orange star 65 light years away. It doesn’t belong the Hyades cluster, but just happens to lie in line of sight. It’s a red giant star, and you can see its colour quite clearly.

The Pleiades (pronounced Ply-a-deez) star cluster is famously referred to as the Seven Sisters (and also by its catalogue number M45). You can find it easily with the naked-eye, and it’s a nice challenge to see how many stars you can make out. Most people can spot nine, but some people claim to see as many as 13! Why not invite the whole family outside and have a mini competition? We’d love to hear how you get on.

To fully appreciate the cluster, use a pair of binoculars. A nice wide-field view is best for gazing at open clusters like the Pleiades, so if you do decide to use a telescope, use something like a 32 mm eyepiece which gives a wide field of view.

If you can pull your eyes away from the Seven Sisters, sweep the ‘V’ shaped area around Aldebaran with binoculars and have a look at the Hyades (pronounced Hi-a-deez). They’re not as pretty as the Pleiades, but you’ll be looking at stars as they were 150 years ago – and that’s amazing when you think about it! 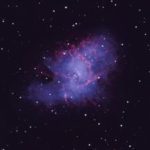 After much argument we decided to put the Crab Nebula on the map, knowing that most people will complain that they can’t see it. It’s so famous that everyone wants to see it, but perhaps it should be called the Pig Nebula because it can be a real pig to find.

The Crab (catalogue number M1) is the remains of a star that exploded as a supernova in the year 1054. Chinese astronomers recorded it, but the Europeans seem to have been more concerned with where the next turnip was coming from as none of them mentioned it. Yet it was a brilliant object and remained so for months. Today there is a spiky nebula in the same spot. It looks amazing in photos, but you need fairly dark skies to see it. Actually binoculars will do, but this is a case where you need a magnification of about 16 to 20 – high for binoculars, but low for a telescope. Don’t expect anything other than a fuzzy patch of sky. You have been warned.