Because they are rather faint you need some help to find them in the first place.  The easiest way to start is to look midway between the stars Altair and Albireo, which is the star at the bottom end of Cygnus. There you’ll find a little arrow shape of stars, Sagitta, the Arrow. It is one of the smallest of the constellations but this actually makes it quite easy to spot even though none of its stars is bright.

The arrow is passing harmlessly between two celestial birds, Cygnus the Swan and Aquila the Eagle. There are conflicting legends about who fired it in the first place, but whoever it was must have been a rotten shot.

Once you’ve found Sagitta, look for Vulpecula, the Little Fox. Its stars are even fainter than those of Sagitta, and more spread out, just above Sagitta. If you are observing from suburban or city skies, chances are that you can’t see it at all, but use binoculars and you should be able to pick it out.

Finally, look to the left of Sagitta and you will see a small diamond shape, which marks the body of Delphinus, the Dolphin. Other stars mark its tail as it leaps out of the water. Like Sagitta, it’s small but easy to spot. 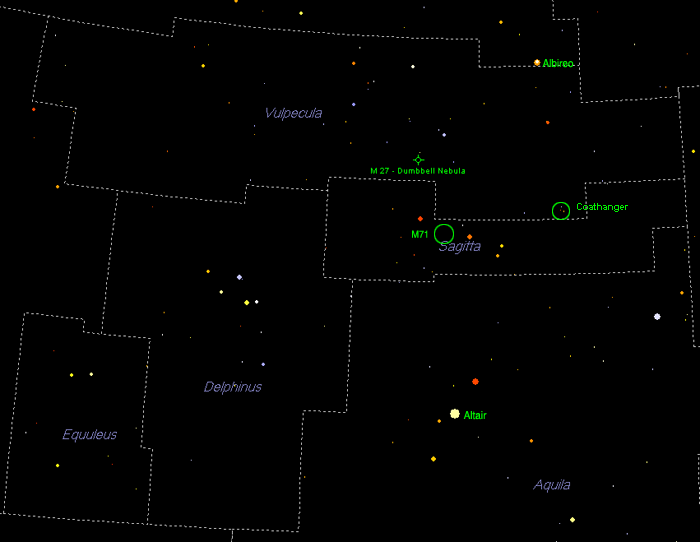 For hints on understanding the star map, please click here

Things to look for

Sagitta has one object that you might just spot with binoculars on a good night, the star cluster M71. It lies in the middle of the arrow. If at first you can’t see it, hold the binoculars really steady. You’ll probably need binoculars with a magnification of 10 or more.

M71 was once thought to be a densely packed open cluster, but now astronomers tend to think that it is a globular cluster about 12,000 light years away from us. Compared with other globulars it is a relative youngster with the stars it contains being between 9 and 10 billion years old. Some globular clusters contain stars that are almost as old as the Universe itself – about 13 billion years.

Vulpecula does have two nice deep-sky objects visible through binoculars. M27, the Dumbbell Nebula, is a bright planetary nebula visible as a small glowing disk from a dark location.  Though it is in Vulpecula, it’s easier to find it by looking directly above the brightest star in Sagitta. M27 lies about 3º north of this star, which means that it is within the same field of view of most binoculars.

To see the ‘dumbbell’ or hourglass shape of the nebula you will need a medium-sized telescope, but you can see a blur of light with binoculars as this is one of the largest and brightest of all the planetary nebulae. It is some 1350 light years away from us. A planetary nebula is actually a shell of gas thrown off an old star, and M27 is the easiest planetary nebula to see with binoculars. Photos show pretty colours, but even M27 is too faint for the colours to show up.

Some objects in the sky are popular because they are just plain fun, and Brocchi’s Cluster, also known as Collinder 399, is one of them. As soon as you see it you will know why it is better known as the Coathanger. Binoculars are best for making out the upside down coathanger shape of the stars. The Coathanger is easy to find. Draw a line from Vega to Altair, and Brocchi’s Cluster will be roughly in the middle.

The first pulsar was discovered in Vulpecula in 1967. It has the catchy name of CP1919 (or PSR B1919+21 if you prefer). When first discovered it was called LGM-1 (standing for Little Green Men). However, the idea that it was a signal from ET was never taken seriously. Pulsars are extremely dense neutron stars that are a million times more massive than the Earth, yet measure just tens of kilometres across. They also rotate rapidly, sending out beams of radio waves across space, like a lighthouse.

Don’t expect to see pulsars in your binoculars, though. You will need to save up to buy a very powerful radio telescope to detect them!