Impact craters can be found on all planets and moons in the Solar System that have a solid surface. They are formed when asteroids or comets slam into the planet’s surface at super-high speeds. Look at the Moon and you will see that its surface is covered in impact craters. You may notice that some craters have bright rays surrounding them. These are made of brighter material thrown out from the crater as a result of the impact. You can make craters and recreate the surface of the Moon yourself with this experiment.

This experiment is messy, so you may want to do it outside or on a floor that can be swept up easily!

A bag of flour

Fill up your baking dish with white flour and sprinkle over the top a thin layer of chocolate powder. Don’t worry about sieving it or making it completely level – the Moon has lots of lumps and bumps too. 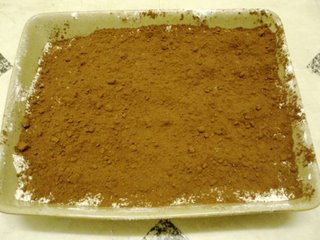 Next take some Blu-Tack and roll a few pieces up into balls of different sizes. You don’t have to worry about them being perfectly spherical or smooth either, because real-life asteroids are all sorts of odd shapes and sizes.

Now here comes the fun part. Take your Blu-Tack asteroids and one by one throw them into your pretend lunar surface. Try dropping them from different heights, with varying amounts of force and at different angles. You should see that for larger or more violent impact events the white flour is thrown out of the crater as ejecta rays, just like the ones you can see on the Moon. Don’t forget to tidy up afterwards! 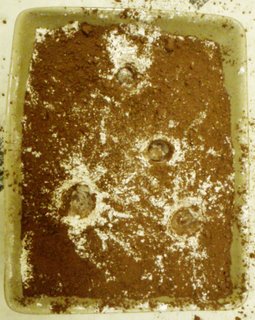 If you want to take this experiment further, or turn it into a project for school, how about doing the following investigative work?

Crater sizes
Measure the craters produced in the the flour for the same sized Blu-Tack asteroids, but dropped from different heights. Plot a graph of crater diameter versus height.

Measure the craters for different sized asteroids dropped from the same height and plot a graph of asteroid diameter versus crater diameter. How do the results of this experiment compare?

Now look at how deep the craters are. Does the depth change with the size of asteroid or the height from which it is dropped from?

You should see that larger asteroids make larger craters, as do ones dropped from greater heights, as they have more energy. For planetary sized craters the relationship is not so simple, because the gravity of the planet (or moon!) plays an important role in determining the shape of the final crater, as does the strength of the material that is being impacted into. Have a look at pictures of other craters on different planets and see the wide variety of shapes of sizes that can be made!

Crater ages
In this experiment you will learn how the amount of craters on a planetary surface can tell us how old a surface is. First of all, smooth out a new tray of flour. Make loads of different sized craters in the flour so that the whole surface is covered. Now, smooth out half of the tray. Throw some more craters into the tray, covering both the ‘old’ and ‘new’ surfaces. Compare the surfaces. You should see that one half, the old half, has many more craters than the ‘new’ half. On the Moon, we know that the ancient highlands are a lot older than the dark mare regions because they have a lot more craters on them. The mare are made up volcanic basalt that erupted to the surface after many of the lunar impact craters had already formed, therefore there was less time for it to get cratered so we know it is younger than more heavily cratered regions.