If there were a popularity poll for constellations, Orion would be right up there near the top. It may not be the largest constellation, and it only has one bright deep-sky object, but it has a lot going for it. It’s definitely the brightest of all constellations, on the basis of the number of bright stars within its boundary.

Orion’s trademark is the three bright stars in a line, known as Orion’s Belt. Orion is seen as a hunter, facing Taurus the Bull. Our map shows that many of the stars in Orion are blue, and you really can see this when you look at the real thing. Compare Rigel with Betelgeuse, for example, and the difference is obvious.

What to look for in Orion

The star colours tell us that these are hot, bright stars. In general, the hotter a star, the more massive it is, andthe shorter its life. A few million years is typical – which may seem long, but is nothing in star terms. Our Sun, bless it, has been going strong for five billion years and is set to keep going for about the same time again. A good thing, obviously, as far as we are concerned. But blue stars must be young, so they must have been born recently. And in fact they are still being born in the Orion Nebula, which is one of the brightest nebulae in the sky. 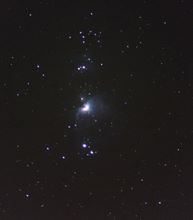 Nebula means ‘cloud’, and the Orion Nebula is a cloud of gas from which stars are being formed. To find it, look directly to the south of the three Belt stars to find a little line of stars pointing north–south. The middle one of these is surrounded by the Orion Nebula, also known by its catalogue number of M42. Look at it with binoculars or a telescope and you should see swirls of gas, though the darker and clearer the sky you have, the better. Don’t expect to see any stars suddenly appearing, though. Changes in the Orion Nebula take thousands of years.

But why doesn’t it appear red and blue, like the photos in the books? That’s because your eyes aren’t very sensitive to the red colour of glowing hydrogen gas, but photos can bring out the colours as they have long exposure times. Sad but true. The photo here shows it looking roughly as you would see it through binoculars, though it will appear more transparent and ghostly than it does in the photo.