You may think that sundials are little more than garden decorations, usually telling the wrong time. That’s true of many, because they are badly designed, but you can easily make a sundial that is far more accurate using materials you can probably find in the home. It has the potential to be accurate to the minute. You can use our sundial anywhere in Europe or the US, and you can even set it to tell summer time. 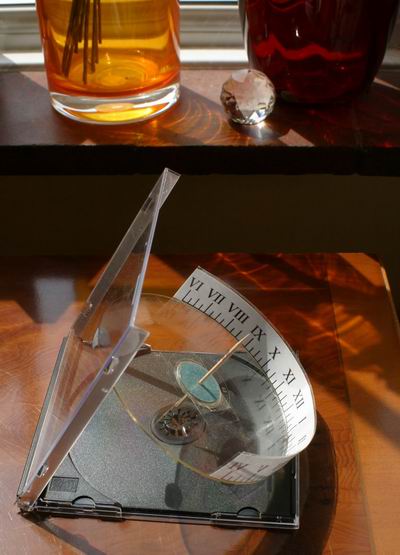 An old CD or, ideally, a transparent CD-sized disc as used in spindles of blank CDs or DVDs
An empty CD case
A cocktail stick
Blu-tack or similar
Sticky tape (ideally 25 mm wide)
Two small circular pieces of cardboard
A protractor
The hour circle (click this link to download a PDF file)

Every sundial has a shadow stick or gnomon that should be set parallel to the Earth’s axis. The Sun’s movement through the sky will then be at right angles to the gnomon, so a scale at right angles to the gnomon can be marked with equal hour lines. Most garden sundials have scales that are at a different angle, so the hour lines are not equal. This makes it impossible to correct them for summer time. We have supplied you with a scale of equal hour lines, designed to fit exactly around the edge of a 12 cm CD. You must print this out to exactly 188.5 mm across so that it will fit. Print out the PDF file and it should be the right size: adjust ‘Page Setup’ of Adobe Reader to Landscape to avoid problems with page margins.

Step 1 Print off and cut out the hour scale.

Step 2 Apply sticky tape to the back of the scale so that the tape overlaps the bottom of the scale by about 3 mm.

Step 3 Stick the scale to the edge of the CD with the scale facing inwards by rolling the CD along the sticky overlapping edge.

Step 4 Stick two circles of thin card to each side of the central hole in the CD. Tip – party poppers have discs of exactly the right size!

Step 5 Make a hole in the exact centre of the CD with a sharp point, then push the cocktail stick through at right angles to the CD. Tip – if you don’t have a cocktail stick, straighten out a paper clip instead. 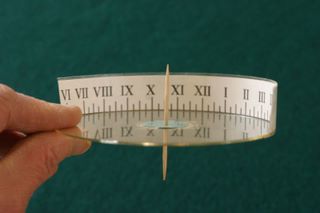 Step 6 Use a blob of Blu-tack to fix the CD at an angle within the CD case as shown, with the noon or 1 pm hour at the bottom depending on whether GMT or BST* (often called Daylight Saving Time) is in force. Use a protractor to make sure that the gnomon is at the same angle to the horizontal as your latitude (between 50º and 59º depending on where you live in the UK*). That’s it: your sundial is ready for use. 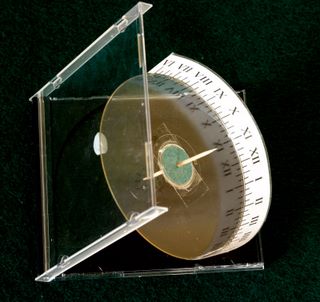 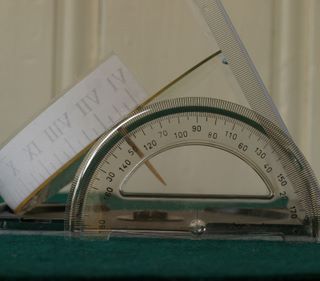 * The sundial was designed to be used in the UK, where Greenwich Mean Time or British Summer Time are used. But you can use the sundial anywhere in the northern hemisphere as well by tilting the gnomon at an angle equal to your latitude. There may also be a correction to the time depending on where you are in your time zone. See the question about longitudes below.

Point the gnomon due north in a sunny spot. Alternatively, as it can be hard to find north indoors, if you have made the sundial correctly you can align it so that the shadow of the gnomon falls on the scale indicating the correct time, and it should then be fairly accurately set. 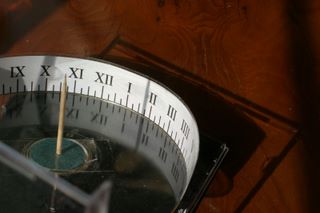 The dial will give you solar time, which usually differs from clock time by an amount that varies throughout the year. The difference is known as the Equation of Time. Here is a table giving the approximate dates when the sundial is fast (–) or slow (+) compared with your watch by a whole number of minutes:

These figures apply wherever you are in the world or whatever your time zone. However, your location within your time zone – in the UK, how far east or west of the Greenwich meridian – also affects the sundial reading.  See the questions below.

Questions for you to think about

Q Why is it best that the CD is transparent?

A Think about what happens in winter. The Sun gets low in the sky, and in fact between about September and March 21 it is below what’s called the celestial equator. The CD is parallel to this, so in winter sunlight falls on the lower side of the CD. If it is not transparent, the hour circle will be in the shadow of the CD so you won’t be able to see the shadow of the gnomon. In real armillary sundials there is no structure to get in the way, so they work at all times of year (see below).

Q Over what range of latitudes will your sundial work?

A Its range is limited by the amount over which you can tilt the gnomon in the CD case. If you can find a different way to support the CD at an angle, it will work literally anywhere in the world. At the Equator the CD would have to be vertical and the gnomon horizontal. In the southern hemisphere the hour circle would be upside down, but it will still work.
Q Over what range of longitudes will your sundial work?

A All of them. Local time depends on the location of the Sun in the sky, though where you are in your time zone also plays a part. For example, the whole of the British Isles are within the same time zone. However, when the Sun is overhead at Greenwich (on which the time zone is based), it is still 40 minutes away from being overhead in the west of Ireland. There, noon occurs not at 12.00 but 12.40 in winter, or 1.40 pm in summer.

You can set your sundial to read civil time wherever you are by fixing it to the CD case so that the bottom point allows for your time zone difference. So in Plymouth, Swansea or Glasgow, for example, which are all about 4º west of Greenwich, the bottom point would read not 12.00 but 12:16 in winter and 1:16 in summer. The 16 minute difference is additional to the Equation of Time. So to make your sundial super-accurate, you would reset it every few days to take into account both effects.

So for example, to allow for the Equation of Time on December 4 (-10 minutes on the table) you would set the bottom point of the hour circle to be not 12.00 but 11.50. But for every degree you are west of Greenwich, you need to add four minutes of time to the setting, so in Glasgow you would actually set the bottom point to 11:54.

Outside the UK, there is sometimes a big difference between solar time as given by the sundial and local time.
Q Why does the hour scale stop at 6 am and 6 pm?

A Because otherwise the shadow of the hour circle itself would obscure times in the early morning and early evening around March and September. You could renumber and skew the circle to tell whatever range of times you choose within a 12-hour period.
Q Why does solar time often differ from civil time?

A The reason for the Equation of Time is that the Earth’s orbit around the Sun is not a circle but an ellipse, and it moves faster when it is close to the Sun than when it is far away. But unequal hours are not good for civil timekeeping, so we even out the differences over the year.

Q Why have you got IIII instead of IV for 4 pm ?

A That’s the way clock faces are traditionally drawn. You can research this one on the Internet for yourself by entering, for example, ‘roman IIII 4 pm’ into a search engine. Use four capital letter I.