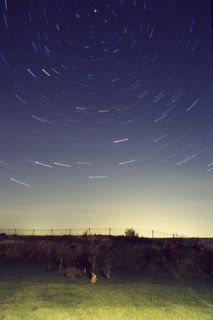 Every astronomer needs to know which way is north. The sky turns around a point in the northern sky as a result of the Earth’s daily rotation on its axis (pictured at right). If you could speed up the slow movement of the stars you would see them wheeling anticlockwise around this point.

As this happens, objects rise on the eastern horizon and set on the western horizon. They reach their maximum height above the horizon when they are due south. So if you want to know where to look for objects, you need first to know which is your north–south line.

If you are unaccustomed to viewing the sky, you might not know exactly where north and south are. There are several ways to find out. Probably the simplest is to notice where the Sun is at midday. It is more or less due south at that time – but there are complications. The main one is that in summer, when British Summer Time is in force, midday (by the Sun) happens at 1 pm. The other is that variations in the Earth’s movement around the Sun mean that sometimes it is a little ahead of clock time, and sometimes behind. But while you can’t rely on the Sun to be exactly due south at midday, it is close enough for getting your bearings.

An alternative is to look on a map of your area. While your house is probably not shown, or not accurately, you can work out which direction the streets run, which will give you some idea.

A third method is to look at satellite dishes on the sides of houses. These do not point south, but towards satellites at about 28º to the east of south. At least this gives you a rough idea of where south is. 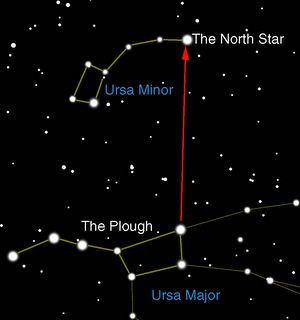 It just happens that there is a fairly bright star close to the sky’s north pole. You can see it very close to the top of the picture above. It is called Polaris, the Pole Star or the North Star, and a lot of people expect it to be very bright, but it is fairly ordinary.

If you can recognise the star group called The Plough, you can find Polaris by following the two right-hand stars of the group as shown on the map on the right. With a bit of cheating they lead you to the Pole Star.