If you thought that Castor was something the sofa runs on, think again. It is also the name of one of the Heavenly Twins, Castor and Pollux.  When you have stopped sniggering at his poor brother’s name, I will continue.

In legend, these were twins born to Leda, Queen of Sparta. As so often happens in these tales, there was a bit of hanky-panky between her and Zeus, king of the gods, which resulted in one twin being fathered by her husband and one by Zeus.  This is not the normal state of affairs with twins, but those Greek gods were a saucy lot.

The twins in question are more than just the two stars. They extend as two lines of stars down to the lower right of the map, with the star Mu being at Castor’s feet and Alhena marking Pollux’s feet. The Milky Way runs along the west (right) side of the map, so there are quite a few stars in that area if you look with binoculars in a dark sky. 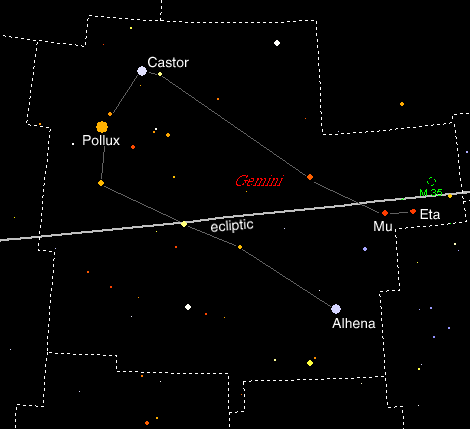 Things to look for in Gemini

Castor is a bright star 52 light years away. It’s famous for being a multiple star, with six stars all orbiting one another. But small telescopes will show only two of them, 4.5 arc seconds apart. This means that virtually any astronomical telescope should be able to show them as two separate stars, though you might need to use the highest magnfication on a small telescope to do it. If there is a lot of turbulence in the atmosphere (known to astronomers as the ‘seeing’) you might have problems. The left-hand picture shows what they look like under poor seeing, while the right-hand picture shows good seeing.

Pollux is an orange star about 34 light years away, so it’s not such a close neighbour of Castor as it appears in the sky.

M35 star cluster is not particularly bright, but it’s quite easy to find in binoculars just above and to the right of the star Eta Geminorum. In a good sky you might even be able to see it with the naked eye. Using a telescope you can count several dozen stars. The drawing here was made by Martin Lewis using a 75 mm refracting telescope.

Both Eta and its easterly companion Mu are red giant stars. Eta varies in brightness slightly.

The ecliptic runs through Gemini. This is the track of the Sun, and the Moon and planets can also be found fairly close to it, so from time to time there might be an extra bright planet in the constellation.