A northern constellation, visible during the summer and autumn from the UK. Also shown is the neighbouring constellation of Lyra, the Lyre. Cygnus is Latin for Swan (think of cygnets, which are young swans), but you can also see it as a Northern Cross. This particular swan is in flight, with its long neck at the bottom of the cross, its wings outstretched and the star Deneb as its tail.

So what’s a swan doing flapping around the sky? Actually, it is rather saucy and quite unsuitable for children, so look away now. The Greek myth says that the chief god, Zeus, was a crusty old gent who rather fancied a girl called Nemesis. She not surprisingly didn’t like the idea of this old chap breathing all over her, so she changed her form into various animals so she could run faster. Being chief god, Zeus was a bit of a shape-shifter himself, so he always changed into a faster animal. Eventually Nemesis changed into a goose and Zeus changed into the swan which we see here. As for the rest, well, it’s before the watershed so we will have to draw an embarrassed veil over it. But you won’t be able to look at Cygnus again without thinking of it…. 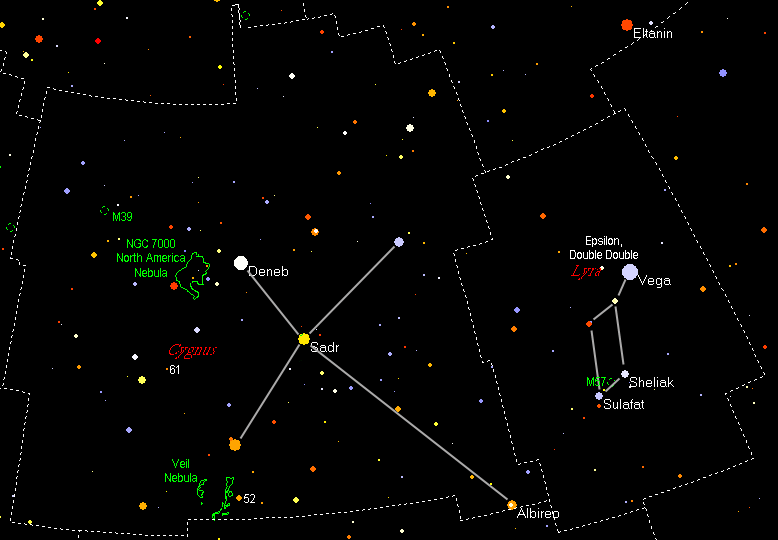 For hints on understanding the star map, click here

Things to look for in Cygnus

Albireo is not a very bright star, but it is a favourite for most astronomers with telescopes. Take a look with even a small telescope, and you’ll see

that it is actually a double star, two stars close together. The brighter one is yellow and the fainter one is blue, as the picture here shows.

Just one thing. The name is Albireo, pronounced ‘Al-By-Ree-O’ or if you prefer ‘Al-Bi-Ray-O’. It gets awfully annoyed if you gets its name wrong, like ‘Al Berio’, who sounds like a Chicago gangster.

61 Cygni (just below the label for Cygnus on the map) is one of the most famous stars in the sky. It was the first star ever to have its distance measured, which was done in 1838, and it is really quite close to us at 11.4 light years. Just pause for thought when you look at this star. It is one of the closest stars, yet it is much fainter in the sky than Deneb. That’s because it really is small and faint. In fact it is another double star, but neither of the pair is as bright as the Sun. One is about 85% as bright, and the other 39% as bright. Only because it is close to us can we see it at all. With a small telescope you should be able to see the two separate stars.

M39 is a cluster of stars which you can find with binoculars. As star clusters go it is not very exciting, with only about 20 stars, but at least you can say you’ve seen it.

NCG 7000, the North America Nebula, is one of those objects which appears in lots of books but very few people have seen. So here’s the secret. Wait till you are way out in the country and the night is crystal clear so that you can see the Milky Way with no problem. Get a pair of binoculars and look at Deneb (the bright star to the right of the photo). If it is as clear as possible you should be able to see a dark lane leading away from Deneb to its left. This is just a bit darker than the rest of the sky. Follow this round and down a bit, and you might just spot that there is a curved edge to the dark lane. This is the Gulf of Mexico. Once you know that, you might be able to pick out the rest of the shape of North America. Don’t expect it to be pink, though. This colour only shows up on photographs. Without binoculars, you might just see a brighter patch of the Milky Way.

It is a hydrogen gas cloud, glowing because nearby bright stars are causing it to fluoresce. 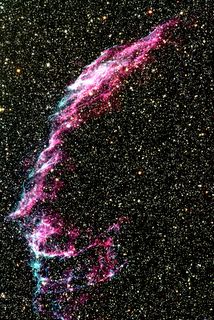 The Veil Nebula really requires a telescope larger than about 115 mm aperture, and a rather expensive filter called an OIII filter (pronounced O-three) which you screw into the eyepiece. To find it, you first have to pick out the star 52 Cygni, shown on the map, and then you might just see a thin misty streak on either side of it, which is the Veil Nebula. The photo here is upside down compared with the sky, which is how you would see it through a telescope anyway, but again don’t expect to see all those colours or as much detail. Just seeing it at all is hard enough under average conditions.

It’s a supernova remnant – the shell of gas left over after a giant star exploded yonks ago.
This page brought to you by the Society for Popular Astronomy Young Stargazers
Text by Robin Scagell