The stars are out. You know you should be out there making great discoveries. But before you can solve the mysteries of the Universe there is another mystery. Which star is which?

When you are a beginner, there’s a lot to learn in a short time. But you don’t have to go it alone – we’re here to help. This page will get you started. Even so, the only way you can really do it is to go out and see for yourself.

Oh, the usual Health and Safety warning. It can get pretty cold out there, so put your coat on. This is not your mother talking, it just makes sense. The more comfortable you are, the better you will enjoy stargazing. Who cares if it’s an anorak – no one can see you. And a bobble hat helps, too. A hoodie? That’s up to you, as long as the hood doesn’t cover your eyes when you look up….

During March we get the spring equinox, which is when day and night are each 12 hours long. So the Sun rises at 6 am due east and sets at 6 pm due west. From now on the nights get shorter, and BST (Daylight Saving Time) starts at the end of the month so it gets dark a lot later in the evening. So make the most of March for stargazing! 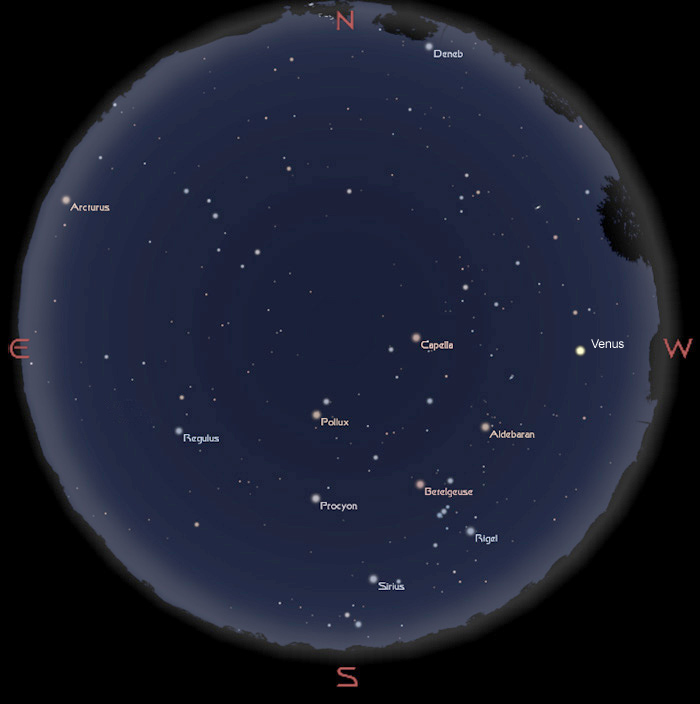 Now don’t write in and tell us that we have the points of the compass all wrong. This is a map of the sky, so you have to hold it over your head. This where a tablet comes in handy! When you do this, east and west will be the right way round.

It shows the whole sky, so the scale is quite small. Normally you turn to see different parts of it, so to see the view looking north, for example, hold the map upside down with north at the bottom.

The map shows the sky in mid month at about 8.30 pm, at the start of the month at 9.30pm, or by the end of the month at 7.30 pm. All times are GMT, but remember that British Summer Time starts on Sunday 31 March so for that day only you need to add an hour.

The trouble with the real sky is that it doesn’t have all those handy labels on it. So once you’ve worked out where south is, look in that direction and you should see a very bright star, which is Sirius – actually the brightest star in the night sky. Notice we said ‘night sky’ so we don’t get messages from smartie pants saying that the Sun is the brightest star in the sky. Just be Sirius for a moment. Sorry, serious.

Look up to the right of Sirius and you should see Orion, with its line of three stars and other stars surrounding it. The star at its top left is Betelgeuse – what astronomers call ‘Bet-el-jooze’ and everyone else calls ‘Beetlejuice’. Ignoring this insult to a perfectly well-behaved star, look now to the left of Beetlejuice – sorry, Betelgeuse – and find another bright star, Procyon. These three stars make up what is called the Winter Triangle. You can see this area in greater detail on the map below. 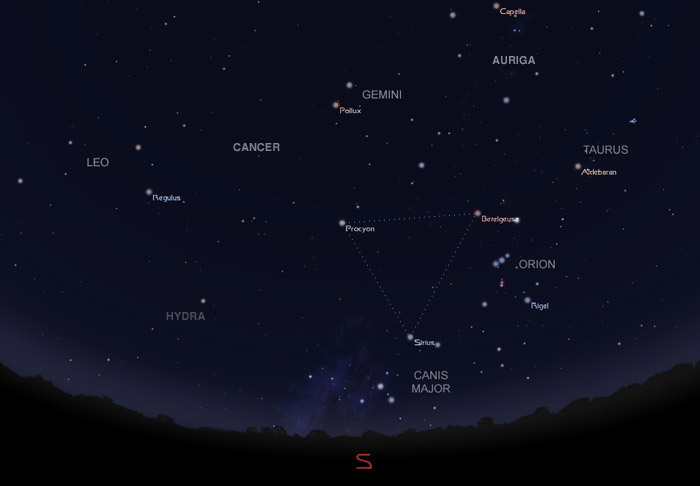 High up above Procyon is a pair of stars called Castor and Pollux. Thank you, we’ve had enough jokes about star names for one month, so let’s just point out that these are the main stars of Gemini, the Twins. Click to find out more about these stars and the constellation.

The really tricky one is Cancer, the Crab. Though everyone knows its name because it’s in the Zodiac, it’s very hard to find if your skies are all aglow with streetlights. In fact, you can hardly see any of its stars on our map, which only shows the brighter stars. But it’s well worth finding because it contains one of the sky’s best star clusters, the Beehive. To find it and for more information about it, click here, and you’d better beehive yourself.

If you want a map with all the constellation names on it, click here. You can set it for any time of the night you choose.

The only bright planet on our map is Venus. It’s a dazzling sight from the early evening onwards, and this month it’s giving ist best performance. Venus is in the evening sky each year, but only when it appears in spring does it get as high in the sky as this year, and you’ll have to wait until 2028 to see it as well again. On 24 March it is at its highest on the sky for the year. Throughout the month, if you get the chance to look at it through a telescope magnifying 25 times or more you will see that it shows a phase like a half Moon. But unlike the Moon there are not details visible on the planet – it’s completely covered by dense clouds. This is why it shines so brightly in our skies.

All ehe rest of the planet action takes place in the morning sky, with Mars, Jupiter and Saturn all in a line in the south-eastern part of the sky just before dawn, so you’d have to be up before 5 am to see them. Saturn is lowest down, and until the 20th Jupiter is next, then Mars. But on the 20th Mars and Jupiter are very close together, and from then uuntil the end of the month Mars is in the middle.They are pretty bright, so it’s easy to pick them out.

What about the Moon, then?

At the very start of the month the Moon is nearly at first quarter (which is a half Moon), which is actually on the 2nd, then full Moon is on the 9th. Last quarter is on the 16th, and the month ends with new Moon on the 24th.  If it’s clear on the 25th take a look low in the south-west about half an hour after sunset and you might spot the very thin crescent Moon. It’ll be easier to see on the 25th, then on the 28th it’s quite close to Venus

We have a whole section of the website devoted to the Moon and its features.

OK, you’ve read all this for nothing, now comes the plug. This page is brought to you by the Society for Popular Astronomy, which is a really great society to join. It’s based in the UK but there are members in other countries as well. It doesn’t cost much to join, and there is a special rate for Young Stargazers. At least take a look at what we have to offer.
Text by Robin Scagell