The stars are out. It can’t be all that hard to learn the sky, can it? But then you get out there and the stars all look, well, starry. So what’s the secret? Read on and find out.

But before you do anything these days you have to carry out a Risk Assessment. Being eaten by a ravenous wild animal? Hasn’t happened yet. Being scared out of your wits by next door’s cat suddenly jumping on you? That’s more likely, assuming next door have a cat. Being frozen to the guts? Even more likely this weather, but at least you can do something about that one by putting on two of everything (within reason, of course). 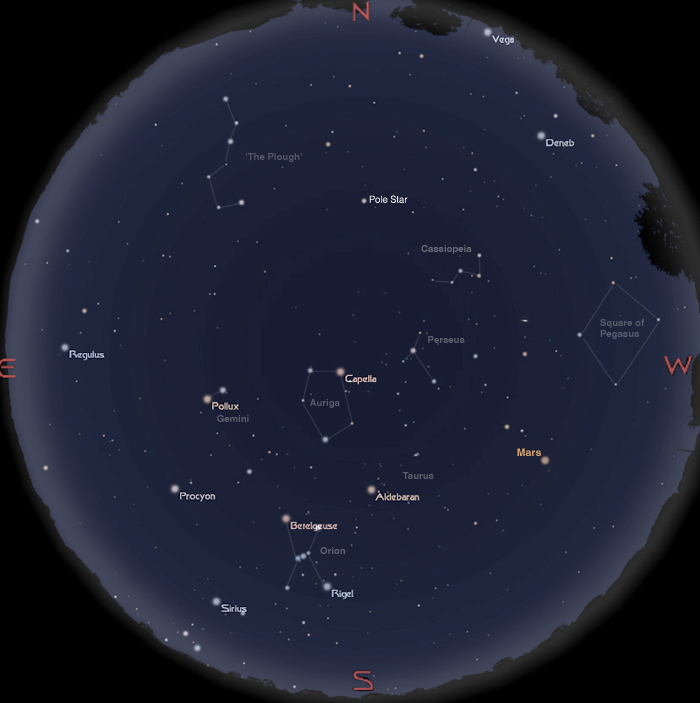 Now don’t write in and tell us that we have the points of the compass all wrong. This is a map of the sky, so it shows what’s over your head which reverses all the directions.  If you hold it over your head, east and west will be the right way round. Easy enough with a phone or a tablet, but not recommended with a desktop computer. Maybe that should go in the Risk Assessment as well.

It shows the whole sky, so the scale is quite small. Normally you turn to see different parts of it, so to see the view looking north, for example, hold the map upside down with north at the bottom.

At this time of year one of the best constellations (star patterns) of all is in the sky – Orion. Look just to the left of your south point and you should spot three stars in a line, with four other stars forming a sort of box around them, as shown on the map below. 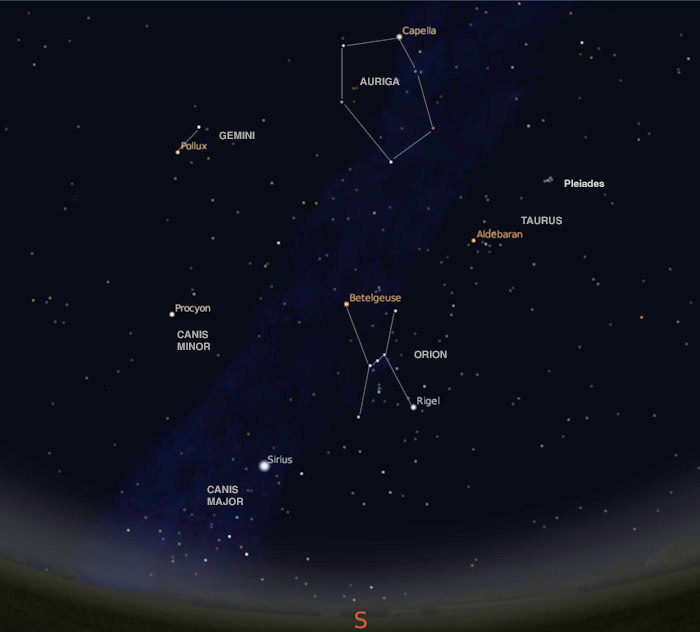 Orion has more bright stars than any other constellation, so it shows up no matter how bad your light pollution is. You can’t mistake it for anything else in the sky. As well as the three stars in a line there are two brighter stars, called Betelgeuse and Rigel, at top left and bottom right.

The three stars in a line are known as Orion’s Belt. Orion is meant to represent a hunter, usually facing westwards towards Taurus, the Bull. Dangling from his belt is a sword, which is the line of fainter stars just below the belt where the map is marked M42.

You can follow the Belt stars up and to the right (the west) to the bright star Aldebaran, in Taurus, and beyond that to the best star cluster in the sky, the Pleiades (pronounced Ply-a-deez). Then following the Belt stars down and to the left you get to Sirius, in the constellation of Canis Major, the Greater Dog. Sirius is the brightest star in the night sky (note: smart-alecs love to point out that the brightest star in the sky is the Sun so you always have to be vary careful to say the night sky to avoid giving them the satisfaction of doing so).

Also look out for Auriga, some distance directly above Orion. Its brightest star, Capella, is almost overhead from the UK at this time of year in the evenings. There is a little group of three fainter stars just to one side of it. There are four other stars in a big pentagon making up the rest of the constellation.

Above and to the left of Sirius is Procyon, then high up above Procyon is a pair of stars called Castor and Pollux. When you have stopped sniggering, we will just say that these are the main stars of Gemini, the Twins.

For a star map that shows all the constellations and their names, click here.

Just one bright planet in the evening sky at the moment – lovely Mars. It’s quite high up over in the western part of the sky, and you’ll notice its reddish colour quite easily. But unfortunately it’s now getting quite distant from Earth, so you won’t see much even through a telescope – just a tiny reddish dot. You’ll have to wait until autumn of next year to be able to see it well, as it’ll be coming close to Earth again next year and we’ll have the best chance to view it for some time.

But Mars is doing us a great favour this month, on the 11th, as it’ll be quite close in the sky to the distant planet Uranus. Normally we don’t mention Uranus on these pages because it’s usually quite hard to find and, well, once you’ve spotted it there isn’t much to see. But on 12 February Mars will be very close to Uranus, so find Mars and you can spot Uranus.

Actually, it’s not quite as simple as that, because Uranus is about 100 times fainter than Mars, so you’ll need binoculars or a telescope. The map below shows a rather colourful view of the pair as seen through typical binoculars with a field of view of 5º. The blobs just show the brightnesses of the two planets, not their true disc sizes. In case the forecast is for bad weather on the 12th, we’ve shown positions of Mars on the 11th and 13th as well.

Jupiter, Venus and Saturn are all in the morning sky at the moment, and you’d need to be up around 6 or 7 am to see them, down in the south-east in the morning twilight. The three planets are in line, making a great sight. Jupiter and Saturn get higher during the month, while Venus gets lower in the sky, as the maps below show.

And a comet, too!

Don’t get too excited. Yes, there’s a comet around, named Comet Iwamoto, which was discovered by a Japanese astronomer last December. It’s not going to be very bright, and you’ll certainly need binoculars if not a telescope to see it, but hey, comets don’t come around all that often so we have to make the most of what comes along. You’ll need to stay up after about 10 pm as it’s moving through the constellation of Leo, which is rising in the east at the time of our map at the top of this page. So first use the map below to find Leo.

Looking at Leo, here’s the track of comet Iwamoto during mid February. Don’t expect to see a tail as the map shows – that’s just a comet symbol. You’re more likely to see a faint circular glow, and the worse your light pollution, the less likely you are to see anything. Warning: comets can endanger your mental health, as you try hard to find them and they remain invisible!

What about the Moon, then?

It begins the month as a waning crescent in the early morning sky, as last quarter was on 27 January. Next comes New Moon on the 4th, though it’s in line with the Sun then and you won’t see it at all. You might just see the crescent Moon in the western twilight on the 6th about 30 minutes after sunset, but it’ll be easier to see on the 7th. There’s first quarter on the 12th, then full Moon is on the 19th. This full Moon will be a so-called supermoon, which is a little bit bigger than an average Moon because it is slightly closer to Earth than usual. The month ends with last quarter on the 26th.

Sorry, no eclipses this month. But we have a whole section of the website devoted to the Moon and its features.

OK, you’ve read all this for nothing, now comes the plug. This page is brought to you by the Society for Popular Astronomy, which is a really great society to join. It’s based in the UK but there are members in other countries as well. It doesn’t cost much to join, and there is a special rate for Young Stargazers. At least take a look at what we have to offer.