So. You are keen to get out there and do some observing. The stars are out. But which is which?

When you are a beginner, there’s a lot to learn in a short time. But you don’t have to go it alone – we’re here to help. This page will get you started. Even so, the only way you can really do it is to go out and see for yourself.

It may be April but it can get pretty cold out there, so put your coat on. We don’t want frozen Young Astronomers on our hands. And knowing that some of our readers are Old Astronomers, this applies to them, too. The more comfortable you are, the better you will enjoy stargazing. Who cares what you look like – no one can see you. And a bobble hat helps, too. A hoodie? That’s up to you, as long as the hood doesn’t cover your eyes when you look up…. 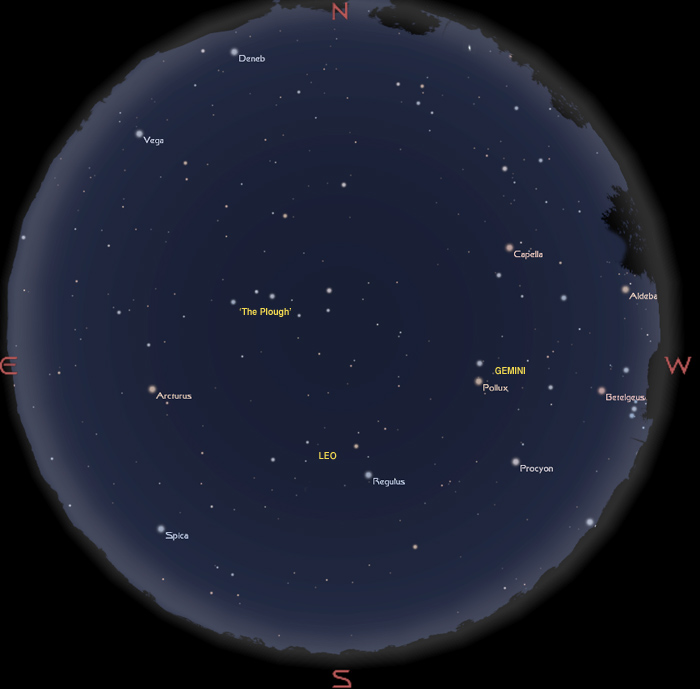 Now don’t write in and tell us that we have the points of the compass all wrong. This is a map of the sky, so you have to hold it over your head. When you do this, east and west will be the right way round.

It shows the whole sky, so the scale is quite small. Normally you turn to see different parts of it, so to see the view looking north, for example, hold the map upside down with north at the bottom. It is shown for the UK, but will also work fairly well for Europe and North America.

The map shows the sky in mid month at about 10 pm, at the start of the month at 11 pm, or by the end of the month at 9 pm, though by then it will be too light to see much at that time. Anyone would think it was summer. All times are British Summer Time.

If it all looks just like a lot of dots, rather than the load of odd animals and bits of human beings that some sky maps show, here’s the way to get to grips with the sky. Start with something familiar and work from there. Most people recognise the seven stars that in the UK we call the Plough and in the US is called the Big Dipper. If you can’t find it, it’s because you aren’t looking high enough – it’s almost above your head at this time of year, so it’s shown at the centre of this map.

Look below the Plough, about halfway between there and the horizon, and you will see a group of stars called Leo. Now use the map below to find more patterns nearby, but don’t expect to see those convenient lines helping you to see the patterns. If you do see them, consult an optician or give back those glasses your friends gave you on 1 April. 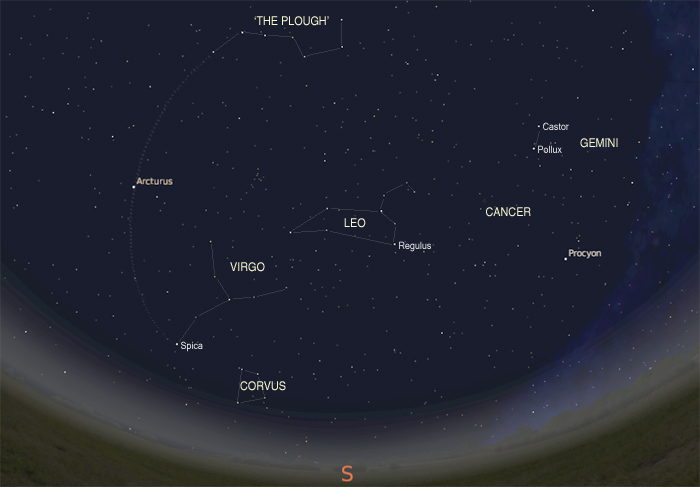 Leo is the main constellation in this part of the sky, and it’s very recognisable. There are some nice groups of galaxies in it which you can find with a telescope, so click here to find out more.

Above and to the right of Leo are two bright stars, called Castor and Pollux. These are the main stars of Gemini, the Twins. Click to find out more about these stars and the constellation.

Between Leo and Gemini, and quite hard to see on this map, is the constellation of Cancer. To find out more about this famous but usually rather secretive bit of sky, click here.

Lower down and to the left of Leo is Virgo with its bright star Spica. Jupiter is also there this year, above Spica and a lot brighter, so that’s the best guide to finding this constellation.Another way to find Spica is to go up to the Plough and follow the curve of its handle round. First you come to a very bright star, Arcturus, and then you come to Spica, which is a lot lower in the sky. On the map is marked a sort of Y shape, which is quite easy to pick out, which helps you to spot Virgo.

If you want a map with all the constellation names on it, click here.

At the map time there are no bright planets, but if you look earlier in the evening over to the west you’ll see Venus shining quite brightly low down in the twilight sky. It has more or less set by the map time, but look from about 45 minutes after sunset and you’ll see it easily if your horizon is low enough. Find out more in this news story.

Just as Venus sets, Jupiter starts to rise over on the other side of the sky, and by midnight it’s the brightest object in the night sky (apart from the Moon and any aircraft that happen to be around). It is low in the south-east, shining down brilliantly and without twinkling – always a sign that you are looking at a planet rather than a star. This is because planets have tiny discs, whereas stars are points of light. Starlight is easily disturbed as it passes through our turbulent atmosphere, which is what causes twinkling. Jupiter is worth looking at it through binoculars, as you should see three or four of its moons like tiny stars on either side of it. With a telescope you can see a couple of its dark equatorial belts as well.

Mars and Saturn are in the early morning sky at the moment, quite close together down in the south-east, rising around 3 am. They will be in the evening sky during the summer months so will be easier to observe then.

Mercury is too close to the Sun to be seen from the UK.

Around 22 April you should look out for few meteors – shooting stars. The annual Lyrid meteor shower is then at its maximum, and this year the event coincides with first-quarter Moon which sets about 3 am. This will brighten the sky somewhat, but the meteors come from the opposite side of the sky so if you have a good clear sky you should still see some meteors despite the Moon. There are only likely to be around 15 an hour even under ideal conditions, which in practice never actually applies, so don’t expect anything spectacular. They will appear to come from the general direction of Vega, over to the top left of the map at the top of the page. Others could appear, which are not part of this shower. For more details, see our Meteor Section page on the shower.

It begins the month just after full Moon, which was on 31 March. Last quarter is on the 8th, then comes New Moon on the 16th. You might just see the crescent Moon in the western twilight on the 17th about half an hour after sunset, below and to the left of Venus — a great sight, and worth a photo.  There’s first quarter on the 22nd, then there’s full Moon on the 30th.  Did you know that the actual full Moon always rises exactly opposite the Sun in the sky, and at the same time? Well, you do now.

We have a whole section of the website devoted to the Moon and its features.

OK, you’ve read all this for nothing, now comes the plug. This page is brought to you by the Society for Popular Astronomy, which is a really great society to join. It’s based in the UK but there are members in other countries as well. It doesn’t cost much to join, and there is a special rate for Young Stargazers. At least take a look at what we have to offer.
Text by Robin Scagell