The term “semi-regular variable” is used to describe a group of stars that while not being fully predictable, do show some periodicity in their brightness variations. Many can be rather inactive at times, however, spending months or even years varying over only a small section of their catalogued range. This does not make such stars particularly exciting to observe.

Z Ursae Majoris on the other hand proves to be a much more rewarding star to observe, as can be seen in this light curve, which combines observations made since the start of 2014 by SPA members Matthew Barrett, Don Matthews, Jonathan Shanklin and Tony Markham.

In the light curve we can see that Z UMa is going up and down in brightness approx every 6 months. The star actually has two periods of variation, both of which are close to 6 months in duration. The interaction of these two periods is one of the factors that cause the shape of the light curve to change from one cycle to the next. The early 2016 peak was for example flatter topped and possibly slightly fainter than the previous three peaks. Recent minima have also been unusually faint. 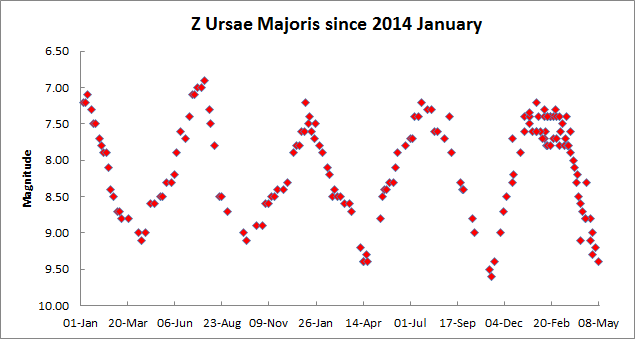 More information about Z UMa, including a finder chart, can be found here