Here is a selection of light curves from 2014 for stars on the programme of the Variable Star Section:

A good amount of variation in brightness was seen during 2014. The “irregularities” in the later part of the year may well, in part at least, be related to the star being low in the sky during the autumn months, making brightness estimates more tricky to carry out.

RZ Cas is an eclipsing variable star with an orbital period of approx 29 hours. All of the observations made during 2014 have been combined into this single light curve. As can be seen, it so happened in 2014 that RZ was seen emerging from eclipse much more often than it was seen fading into eclipse.

The primary eclipse occurs when the brighter star in the RZ Cas system is eclipsed by the fainter star. The eclipse is believed to be borderline between being a partial eclipse and being a total eclipse.

If the eclipses were occurring in line with the predictions, then the primary eclipse would be centered on (predicted) phase 0.

Although there is some scatter, much of which will be due to the differences in observing conditions (moonlight, haze, etc) for each observed eclipse, the suspicion is that the eclipse is centered slightly to the left of phase 0, and so was occurring very slightly earlier than predicted. The discrepancy probably amounts to around 10-20 minutes.

Another(!) rather quiet year for this star. Indeed the star has shown little variation in brightness since the 1960s and so is likely to be dropped from the programme in the next review.

T Cephei is a Mira type variable whose maxima are separated by just under 13 months. Being located near the star beta Cephei, it is quite easy to locate and is also circumpolar from the UK. It can be followed using binoculars over most of its brightness range. 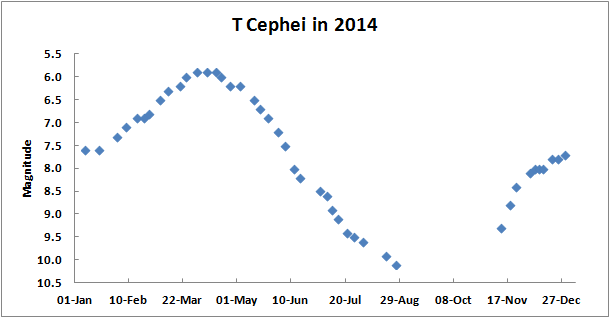 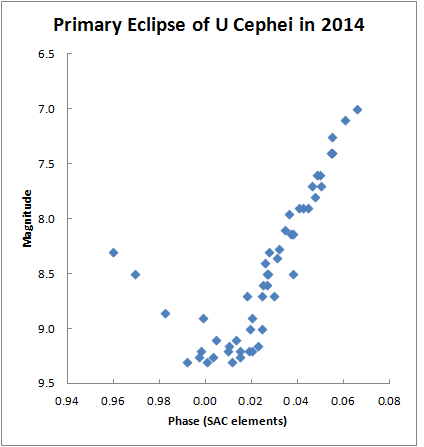 U Cephei is an eclipsing variable star, similar to Algol (beta Persei) and RZ Cassiopeiae.

In the case of U Cep, the eclipses last about 9 hours, are total eclipses and occur approx every 2.5 days.

As in the earlier RZ Cas report, all of the observations made during 2014 have been combined into a single light curve.

However, it is still fairly obvious that the primary eclipse is centred to the right of (predicted) phase 0, indicated that the eclipses were occurring later than predicted in 2014.

As an example, if the eclipse was centered on phase 0.01, then it would be coccurring approx 36 mins later than predicted. 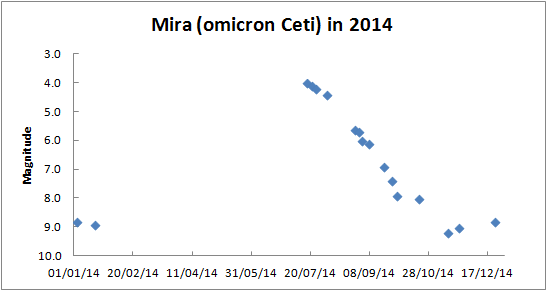 Maxima of Mira are currently taking place during the spring months when Mira is close to conjunction and not observable from the UK. It only emerges from the morning twilight around mid July.

For many years – since its deep fade started in the summer of 2007 – R CrB had not been visible in binoculars. Indeed it had spent much of its time down near 15th magnitude. However, it started to brighten during the summer of 2014 and by the mid autumn it was visible again in binoculars. By the end of January 2015, it had reached mag 7.0 as it closed back in on its “normal” maximum brightness. 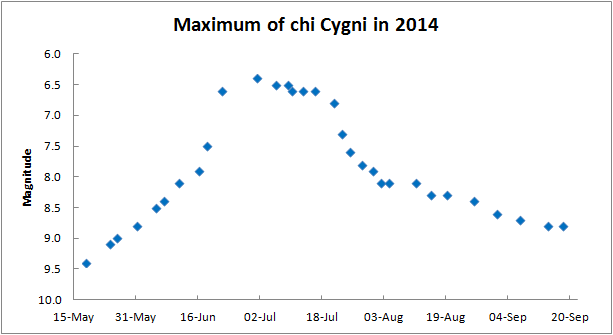 Chi Cygni produced an unusually faint maximum in 2014. Indeed,this may well have been the faintest maximum that this Mira type variable has ever produced in the three centuries since its variations were first recognised. In contrast, some maxima in recent years have reached mag 4.0 or brighter.

Only a small amount of variation in brightness was seen during 2014 from this semi-regular variable. Alpha Her appears to have been brightest during the summer months.

This Mira type variable star was fading from its late 2013 maximum at the start of the year. By mid spring it had been lost in the evening twilight as the constellation of Leo approached conjunction with the Sun. By the time that it emerged from the morning twilight in the early autumn, it was well on the way towards its November maximum. 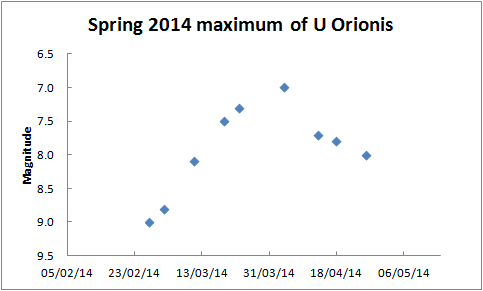 U Ori is a Mira type variable that has an average interval between maxima of 372 days.

Hence maxima are getting later each year by about a week.

The 2014 maximum occurred in early April … this is quite late in the apparition of U Ori. Less than a decade from now the maxima will have disappeared into the late May evening twilight.

Despite being located in the constellation of Orion, U Ori is located a long way from the main pattern of Orion – it is actually located just south of the ecliptic, close to whether Taurus meets Gemini.

Although Rho Persei is often described as showing a brightness range of nearly a magnitude, any brightness changes that do occur seem always to be much smaller. Indeed, the light curve shown below shows no clear evidence of any brightness changes. This is rather typical behaviour for Rhp Per and hence it is not a very interesting star for beginners. Hence it may well be dropped when the programme is next revised.

The gap in observations during May and June is due to Rho Per being very low in the northern sky and thus not really observable.

2014 was another very interesting year for R Scuti. As in 2013, it showed no sign of following its “standard” description of being a star that produces alternate deep and shallow minima.

R Trianguli is a Mira type variable that has an interval between maxima of approx 9 months. At the start of 2014, R Tri was fading from its late 2013 maximum. The 2014 maximum was seen in September.

This Mira type variable rose sharply in brightness during February as it approached its March maximum. By June, it had become too faint to be seen using binoculars, but was picked up again at the start of December as it brightened rapidly towards its January 2015 maximum.

Z UMa is a semi-regular variable star located in the ‘bowl’ of Ursa Major. The interval between maxima is usually around 6 months. As the light curve shows, Z UMa varied over a range of about 2.5. magnitudes during 2014.