The standard description of R Scuti is that of a variable star that shows alternate deep and shallow minima. In 2013, however, R scuti decided to do something different (and record breaking): 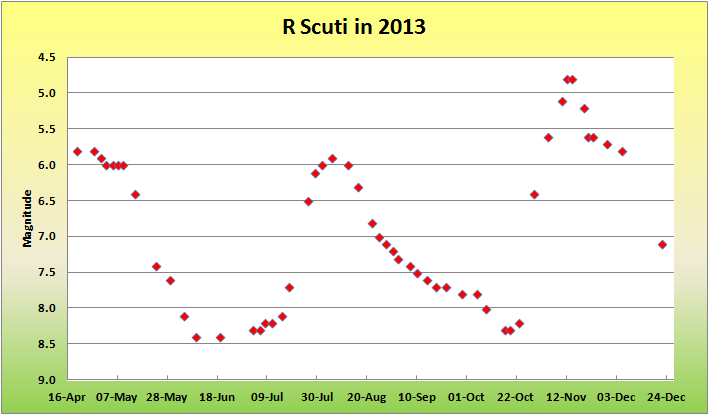 The early part of the year was relatively uneventful, with R Scuti emerging from the morning twilight by late January.

In late April, the first fade started. It turned out to be a rather deep minimum. Few minima go down as far as mag 8.0, but this one dropped all the way to around mag 8.4.

It was also a long one – an analysis by John Toone of the BAA VSS showed it to have spent a record breaking 42 days below mag 8.0.

Rather than returning for several weeks to around mag 5.0-5.5 (as is the norm), the recovery from the fade had only reached mag 5.9 in early August, when it reversed and headed back down into another deep minimum, once more dropping below mag 8.0.

The rise from this minimum was very steep, reaching 0.4 magnitudes per day. This time it brightened all the way to about mag 4.8.

By the time that R Scuti disappeared into the eving twilight just before Christmas, another deep minimum was underway …