The Mira type variable T Cephei was due to reach maximum during the late spring of 2016. This is one of the brighter Mira type variables and it can be followed through most of its brightness range using binoculars. 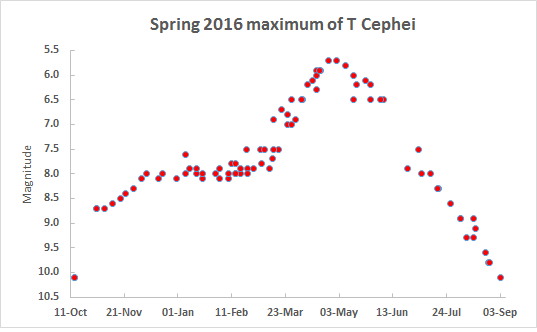 T Cephei passed through minimum during the early autumn of 2015. SPA VSS observations then showed it rising steeply in brightness, reaching mag 8.7 by the end of October. The brightening then slowed, but by early December it had reached mag 8.0. There was then a long interval lasting over 2 months during which there was no further rise in brightness. Finally, in late February, the brightening resumed.

Peak brightness, at around mag 5.8, appears to have occurred in early May, slightly earlier than predicted. A steady fade then set in and in early September T Cephei was recorded at mag 10.1.

Minimum brightness is expected to occur during October, with the next maximum due in June 2017. 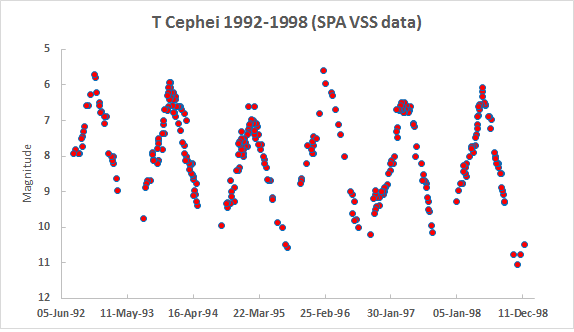 T Cephei has not always shown such long  ‘pauses’ during its rise to maximum. As can be seen in the accompanying light curve showing maxima of T Cephei during the 1990s, there has often been a brief ‘pause’ lasting a week or two, but the recent ‘pauses’ have been exceptionally long.

Looking back through BAA VSS data from the early part of the 20th century confirms that the norm has always been for a brief pause, but nothing was being seen on the scale of what has been happening recently.

Indeed, as the accompanying light curve for the years 2012-2016 shows, the pauses seen to be getting progressively longer with each successive maximum.

Further information about T Cephei, including finder charts can be found in this guide