Here is a selection of light curves from the first 9 months of 2015.

These are based on observations submitted by Matthew Barrett, David Scanlan, Graham Taylor, Richard Livingstone and Tony Markham.

If you have any observations from this period that you have not yet submitted, these would still be very welcome. You can email them to  variablestar@popastro.com 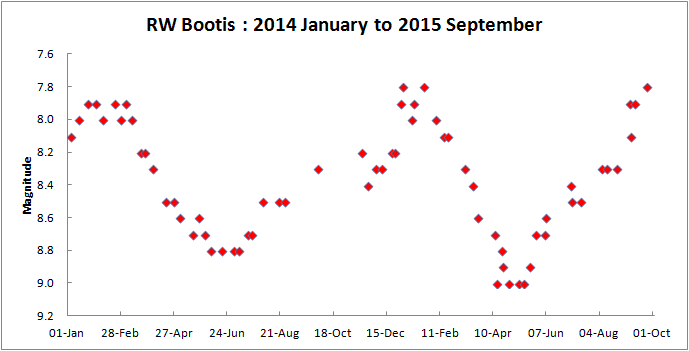 This light curve continues that from 2014.

RW Bootis is a semi-regular variable star that is listed as having a magnitude range of 7.4-8.9 and a period of 209 days (just under 7 months).

However, the 2014 observations had indicated that the brightness changes were occurring with a period close to 10 months and the 2015 observations are suggesting that this is still the case.

Good news also is that RW Boo is continuing to vary over almost all of its catalogued range … something that semi-regular variables don’t always do. 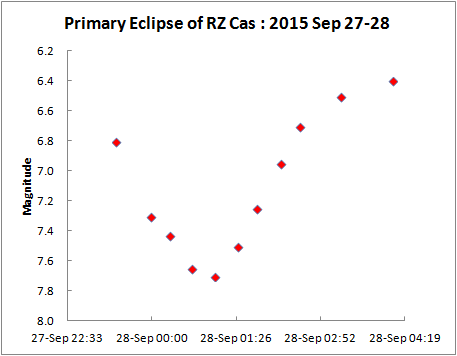 This light curve shows most of an eclipse during the night of Sep 27-28. The start of the eclipse was clouded out unfortunately.

The eclipse actually overlaps with that night’s total eclipse of the Moon – the darker sky background during the Moon’s totality had the benefit of making it easier to see the star when near mid eclipse.

Mid eclipse was predicted for approx 0.9h UT on Sep 28.

The long autumn and winter nights will offer a good number of opportunities to view eclipses of RZ Cas. With the primary eclipse lasting for less than 5 hours, there will be quite a few eclipses that will be observable in full before midnight.

Upcoming examples for observers in the UK will include those during the evenings of Oct 27th, Nov 2nd, Nov 8th and Nov 14th, while RZ Cas will be near mid eclipse at the start of the nights of Oct 14th and Oct 20th. 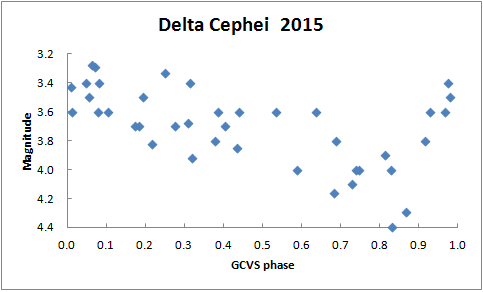 This light combines all observations received from the first 9 months of 2015 into a single light curve showing one cycle of variation of this Cepheid variable.

At first sight, it may look like there is a lot of “scatter” in this light curve. However, this is simply a consequence of the scale on the vertical axis covering a somewhat smaller brightness range that those on the preceding two light curves and this then magnifies the “scatter”. It is quite normal to see differences of +/- 0.1 mag in such light curves.

Despite this “scatter” it is apparent the Delta Cephei was brightest near phase 0 and spent about three quarters of the cycle slowly fading before rising back more steply towards maximum.

One of the first things that you may notice is that this light curve has no magnitude labels (each tick mark is actually 0.1 mag).

The magnitude values have been removed because Mu Cephei is a very red star and as a result it is not unusual for there to be differences as large as 0.5 mag between observers. One observer may see a fade from 3.5 to 4.0, while another may see the fade as 4.0 to 4.5.

It is more important for observers to agree on when brightenings and fades occur, rather than on specific magnitudes on a particular date.

In this case, it appears that the brightness changes in Mu Cephei were rather small during 2014, but a fade then set in duiring the spring of 2015 and this fade had reached about 0.5 mag by late September. 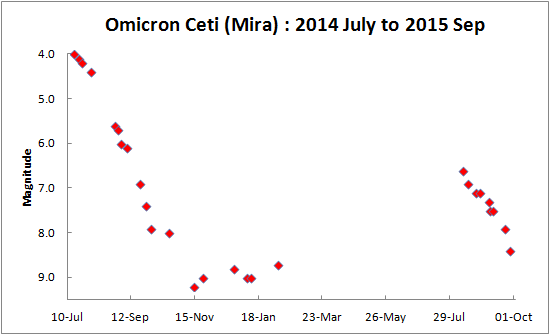 Maxima of Mira are currently occurring during the late Spring when it is close to conjunction with the Sun and therefore unobservable.

From the UK, we can usually pick up Mira emerging from the morning twilight and follow it until it disappears into the evening twilight in early March.

We can also follow it down to minimum using large binoculars or a small telescope. Minimum brightness is currently happening during the late autumn.

The next maximum of Mira is predicted for April 2016. Although the peak itself will be unobservable from the UK, we will be able to see Mira rising quite steeply in brightness towards this. 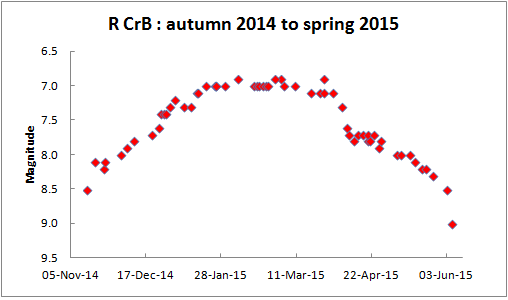 After spending many years being too faint to see using binoculars or small telescopes, R CrB finally returned to binocular brightness during the autumn of 2014.

However, the rise back towards maximum then slowed and, after peaking in late February 2015, a slow fade then set in.

This fade accelerated in early June and R CrB was soon “lost” again.

The latest observations in the BAA VSS database show that the fade took R CrB quickly down to about mag 12.7. Since then it has faded very slowly with the most recent observations placing it at around mag 13.2. 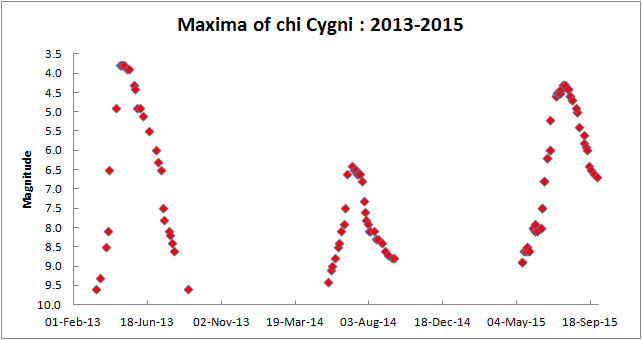 Following a bright peak in early May 2013 and an unusually faint peak in late June 2014, observers waited to see what would happen for the 2015 peak of this Mira type variable.

The peak occurred in late July and was brighter than average, although not as bright as that of 2013.

Chi Cygni will probably remain visible in large binoculars for a few more weeks, but after that a telescope will be required.

The next maximum of Chi Cygni is due to occur in September 2016. 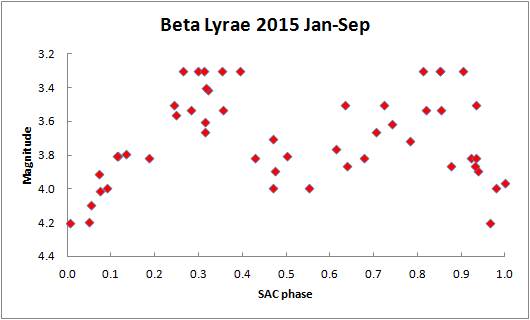 The accompanying light curve shows all of the observations of beta Lyrae reported for te first 9 months of 2015 combined into a single light curve showing one cycle of variation.

The phases were calculated using the SAC elements (the eclipses of Beta Lyrae are currently somewhat out of step with the older GCVS elements. 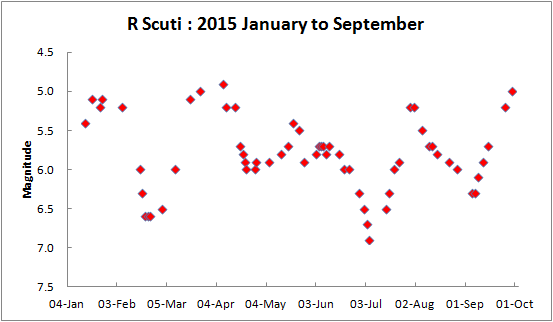 2013 and 2014 were quite dramatic years for R Scuti with some minima being unusually prolonged and/or particularly deep (below mag 8.0).

The brightness changes during 2015 have been somewhat less dramatic, but R Scuti is still showing a good amount of varaation in its brightness.

If it keeps to this pattern, there is a good chance that we will see a deeper minima during November … although by this time R Scuti will only be observable for a short period during the early evening. 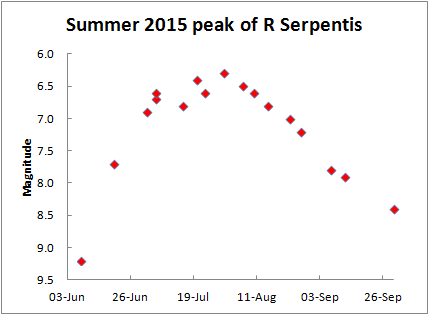 The average period of this Mira variable is approx 358 days. Hence maxima occur on average about a week earlier each year. This is currently working out well because the annual peak is occurring when R Ser is well placed in the evening sky.

The average peak brightness produced by R Ser is about mag 6.9. It exceeded this by about half a magnitude this year.

The maximum also occurred around the third week of July, just over a week earlier than predicted.

As is typical of many Mira type variables, the rise to maximum was significantly faster than the subsequent fade back towards minimum (which is predicted to occur in late February) 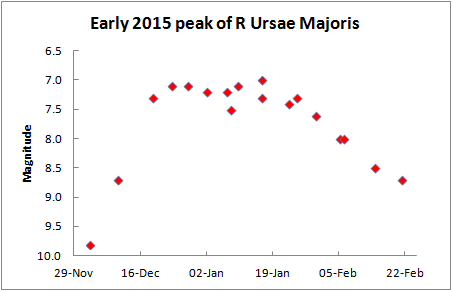 This Mira type variable, having a period of approx 10 months, will sometime produce two maxima during one calendar year. 2015 will be on such year.

The first, shown in this light curve, took place during January.

The second is due to occur during November. By the end of September it had reached mag 9.7, on the way to this maximum.

The January maximum, peaking at around mag 7.2 was fairly average in it brightness.

We cannot predict in advance whether the November peak will be brighter or fainter than this.

Z UMa is one of the most reliable semi-regular variables.

This light curve shows its brightness changes back to the start of 2014.

The light curve shows that during this time Z UMa was varying with an amplitude of over two magnitudes – almost all of its catalogued brightness range.

The brightnss variations were also showing a period of just over 6 months.

Currently, Z UMa is fading towards minimum, but it should start brightening again towards the end of the year.