This is obviously an important first step – you don’t want to accidentally mis-identify it and spend your time observing a different (non-variable) star!

Identifying binocular (or telescopic) variable stars is more challenging. Don’t worry if it takes you 10 minutes or more on the first occasion to make certain that you have located the correct star. With practice, as the weeks pass, you will locate the variable star much more quickly. You might, one day, even reach the stage at which you can point your binoculars at the star and immediately have the star in the field of view.

For many variables, the section provides wide field charts that should allow you to locate the general location of the variable. These will also allow you to identify a familiar bright star from which you can use your binoculars to ‘star hop’ to the variable star. For example, in the accompanying wide field view for R Scuti (Figure 1), you might ‘star hop’ from the star Altair. 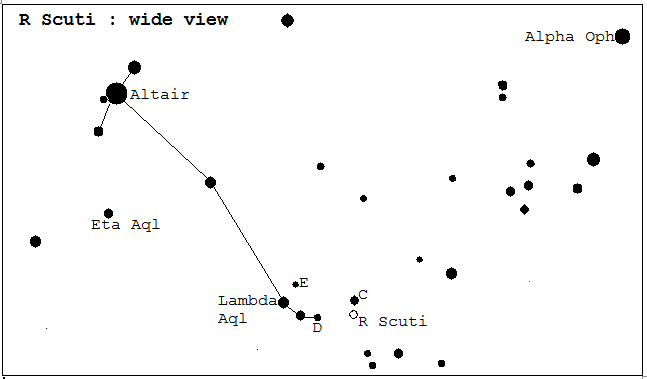 A second chart (Figure 2) then shows a more detailed view of the stars close to the variable. 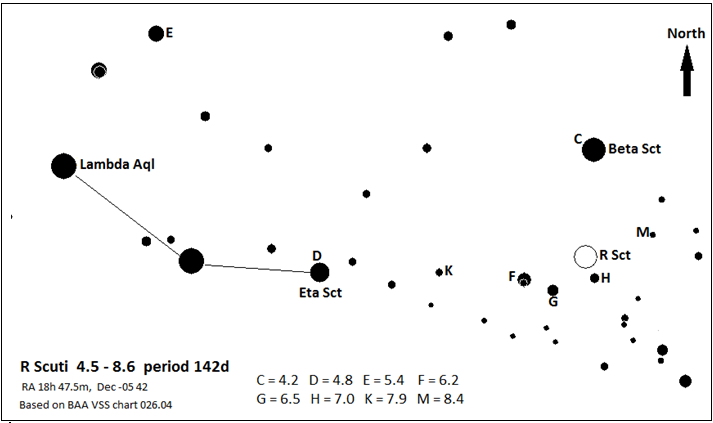 A useful pre-requisite is to find the size of the field of view of your binoculars in degrees. This will be very beneficial as it is a big help to know how much of a variable star finder chart will fit into your field of view.

Unfortunately, the “size” of the binoculars (e.g 7×50) doesn’t necessary determine the size of the field of view, as many manufacturers also produce “wide field” versions of each “size”.

If you are lucky, the manufacturer will have printed this on the binoculars next to the eyepiece. If not, however, you can carry out a simple test. The “pointers” (Alpha UMa and Beta UMa) are separated by approx 5.4 degrees. Hence by looking at these through your binoculars and comparing with size of the field of view with their separation, you can get an idea as to the size of the field of view in degrees.

Telescopes (usually!) have sturdy mounts. However, most binoculars are hand held. In order to make a good reliable brightness estimate, you need to keep them steady. Mounting them on a tripod is one possibility, but this can be a hindrance when attempting to observe variables near te zenith. If they are not mounted, find something rigid to hold them against – this could, for example, be the corner of your house, or a fence post.

Estimating the brightness of the variable star

To help in this process the section provides star charts that show the position of the variable and its comparison stars, along with the comparison star magnitudes. 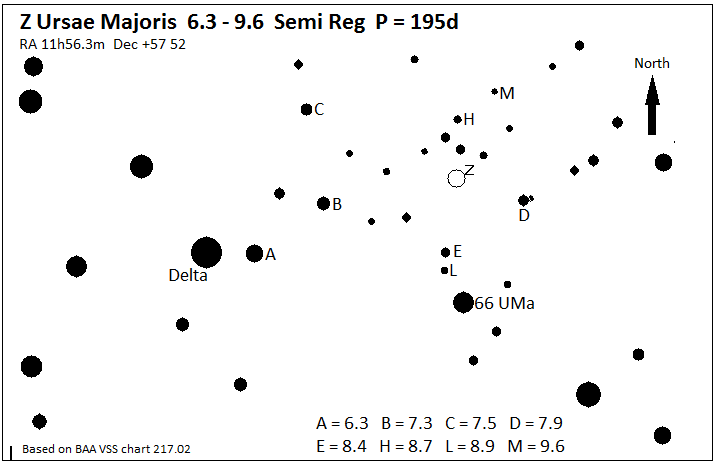 If the variable star appears to be the same brightness as one of the comparisons, you simply record it as having that magnitude.

In other cases, however, you will need to find one comparison star slightly brighter than the variable and one slightly fainter.

In the accompanying finder chart for Z UMa, suppose that you decide that Z UMa lies between comparisons B (mag 7.3) and D (mag 7.9) in brightness.

If it appears midway between them, then you would report it as being mag 7.6

If it appears slightly closer to comparison D in brightness, you would record it as being mag 7.7

If it appears much closer to D than to B in brightness, you would record it as being mag 7.8.

It is useful however, to record your “thinking” as well as the deduced magnitude. This can be particularly useful if you want to double check your observations at a later date – given the (backward) way that the magnitude system works, it can be easy to have made simple mistakes such as recording a star slightly brighter than a mag 7.9 comparison as being mag 8.0 rather than mag 7.8.

There are two standard ways for recording your “light estimate”:

This is usually described as being the easiest method for beginners to us. (although, as we shall see, the Maths can become a bit ‘cumbersome’ and so personally I moved on to Method 2 as soon as I could).

Remember that the brightness difference between comparisons B and D in the above example for Z UMa was 0.6 mag.

If you see Z UMa as being equal in brightness to comparison B, you simply record the “light estimate” as  V = B   and record that Z UMa is of mag 7.3.

If, however, you see the difference in brightness between Z UMa and comparison D as being four times that between Z UMa and comparison B, you would record this as  B(1)V(4)D . (The maths is slightly harder in this case – having split the difference between B and D into five (1 + 4), you now divide 0.6 mag by 5 … and so each “step is 0.12 mag … and one step below B makes Z UMa mag 7.42. However, the norm (except when plotting eclipse light curves) is to round magnitudes to the nearest tenth of a magnitude … and so you would record Z UMa as mag 7.4).

With experience, observers get a “feel” as to what a difference of 0.1 mag “looks” like.

This makes it possible to switch to the Step method

(not be be confused with the (variably sized) “steps” mentioned above in the Fractional method).

For example, in the Z UMa case, if you see Z UMa as being three 0.1 mag “steps” fainter than comparison B, you record this as “B-3”

It is possible when using the Step method to only compare the variable with only one other star. However, it is generally a good idea to still use two comparison stars – one brighter than the variable and one fainter.

Hence, if you also estimated Z UMa to be four 0.1 mag “steps” brighter than comparison D, your full estimate would be recorded as “B-2, D+4”.

In the above case, both halves of the estimate gave mag 7.5. However, don’t worry if they disagree – simply take the average (and round it to the nearest 0.1 mag).

Suppose, for example, that your light estimate was “B-2, D+3”

In general (other than for RR Lyr and Eclipsing variables), visual estimates should be rounded to the nearest tenth of a magnitude so, for example, 7.53 would round to mag 7.5 and 7.57 would round to mag 7.6. When the value lies midway between, as in this case, you round it down to the fainter magnitude. Hence you would report the deduced magnitude for this observation as mag 7.6

As a general rule, try to use comparison stars within half a magnitude of the variable – as the number of “steps” used increases, it gets harder to judge the exact number.

It is very important to allow time for your eyes to become adapted to the dark. This is important for two reasons. Most obviously, it allows us to see fainter stars. However, the colour sensitivity of our eyes change as they dark adapt and we need them to be fully dark adapted so that we will compare stars in a consistent way every time that we observe.

You should allow at least 10 minutes to become fully dark-adapted. You will need to allow longer if you have been looking at a PC monitor or watching television as these leave “after-images” on your retina that take quite some time to fade away fully.

Always observe with an open mind. Record what you see, not what you think you should be seeing. Eclipses, for example, do not always occur at exactly the predicted times and aren’t always symmetrical. Similarly, Mira type variables don’t rise and fall in brightness at constant rates.

One troublesome feature of the way that our eyes work is that if you stare at a red star, it will appear to brighten compared with other stars! This will obviously affect your brightness estimate. Hence staring at stars should be avoided. Short glances will produce a more accurate estimate.

Stars that are closer to the horizon will appear to be fainter – dut to the greater depth of atmosphere that their light must travel through. If possible, always use comparison stars that are nearly at the same altitude as the variable star.

When using binoculars or as telescope, always bring the variable and comparison star in turn to the centre of the field of view.

There will be occasional nights when the atmosphere is so unsteady that it is impossible to make accurate estimates – stars may fade or brighten relative to each other as you watch them. Unfortunately, there is nothing that you can do in such circumstances other than to see if conditions have improved after an hour or more or to try again on another night when sky conditions will hopefully be better.

Please do report your observations to the section.

The preferred method is described in this guide.