A Cepheid variable star that varies in a very predictable way, going up and down in brightness every 10.15 days. 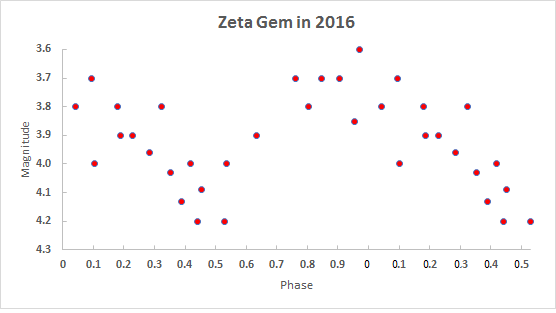 This light curve combines all of the brightness estimates of Zeta Gem made by SPA VSS members during 2016.

For each observation, the phase (i.e. the fraction of the 10.15 day cycle) completed was calculated and this was then plotted along with the magnitude observed.

As can be seen the brightness rises to maximum at the same rate as that with which it fades afterwards.

Zeta Geminorum is a yellow supergiant star whose variations are due to very regular pulsations in the star’s outer layers.

In some ways, Zeta Geminorum is very similar to Delta Cephei. However, as the above light curve shows the rise in brightness is at a similar rate to the subsequent fall in brightness. This contrasts with Delta Cephei – in which the rise is steeper than the fall. The difference occurs because Zeta Gem pulsates in a different way from that with which Delta Cephei pulsates.

Here is a finder chart that will allow you to locate Zeta Geminorum: 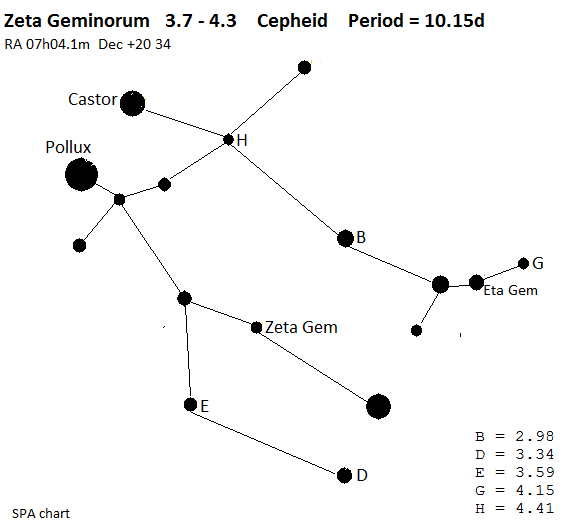 As is the case for Delta Cephei, the brightness changes of this star can be followed with the naked eye if you have a reasonably dark observing site.

However, you may find it easier to use 40mm or 50mm binoculars if light pollution is a significant problem.

At maximum, Zeta Gem will be almost as bright as comparison star E.

At minimum, it becomes fainter than comparison star G.

Take extra care with your brightness estimates when Zeta Gem is low in the sky – try as far as is possible to use comparison stars that are at the same altitude above the horizon as Zeta Gem (otherwise, haze may dim the stars and thus introduce errors).