A Mira type variable, located not far from the star Delta Ursae Majoris, that reaches maximum every 8.5 months. 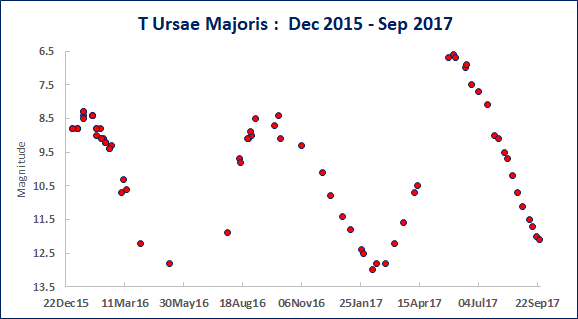 T Ursae Majoris is a red giant star. Its brightness variations are primarily due to pulsations in its outer layers. These pulsations not only cause that star to expand and contract slightly, they also affect its surface temperature. The cooling phase allows some very simple molecules to form and these then dissociate during the warming phase. Absorption of light by these molecules leads to small irregularities in the light curve and hence the star doesn’t brighten and fade at a constant rate.

The brightness variations don’t repeat exactly from one cycle to the next – it is not unusual for successive maxima to differ in brightness by half a magnitude or more – indeed, the spring 2015 peak (mag 6.6) and January 2016 peak (mag 8.3) differed by nearly 2 magnitudes!  Similarly, predictions for the dates of future maxima will always be uncertain by a week or two.

The first shows the wider view. Delta UMa can be a good starting point when using binoculars to location T UMa.

The second chart, which is approx 7 deg x 4 deg, shows the binocular view.

You can monitor the changes in T UMa, by comparing its brightness with that of the lettered comparison stars.