A very red Mira type variable located near the main stars of the ‘Plough’. 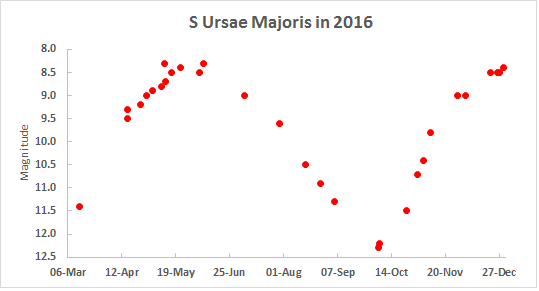 S Ursae Majoris is a red giant star. Its brightness changes are primarily due to pulsations in its cool outer layers, but are also affected by the formation and break up of simple molecules as the star’s surface temperature changes.

Due to the star’s strong red colour it is not unusual for some observers to see S UMa more than half a magnitude brighter/fainter than how it is seen by other observers. This is merely a consequence of how the eyes of different people differ in their sensitivity to light at the far red end of the spectrum.

Whereas the maxima of many Mira type variables tend to be fairly “sharp”, that of S UMa is more “flat topped” and it can linger near maximum for around two months.

The two charts which follow show the location of S Ursae Majoris.

The first shows its general location – Delta UMa is a good starting point when using binoculars to locate S UMa.

The second chart, which is approx 8 deg x 6 deg, shows the close up view for binocular observers. You can follow the changes in S UMa by comparing its brightness with that of the ‘numbered’ comparison stars.