A star that goes up and down in brightness by around a magnitude every 13 hours. 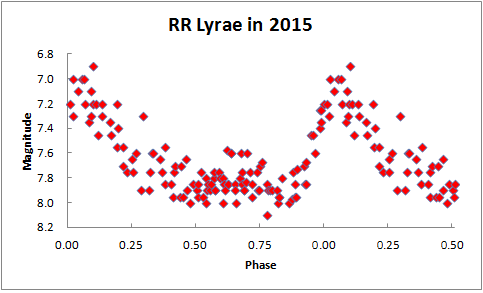 RR Lyrae is a white subgiant star. The brightness variations are due to pulsations in the star’s outer layers.

In some ways, RR Lyrae type variables are slightly less luminous cousins of the Cepheids in that they follow a similar period-luminosity law (thus making it possible to use them to dermine distances to other galaxies). They are however at a different stage in their evolution. Their spectra show that they are “metal poor” indicating that they are somewhat older than our Sun. They have previously gone through the red giant stage and are now in the final stages of their evolution.

Unlike the Cepheids, however, their light curves don’t quite repeat exactly from one cycle to the next – their amplitude can vary slightly. Despite a century of study, astronomers still do not have a clear explanation for this. In addition, their observed times of maxima can drift out of line with those predicted by the orbital elements in the GCVS.

The finder chart below shows the location of RR Lyrae.

You can follow the brightness changes in RR Lyrae by comparing it with the comparison stars that are labelled with their magnitudes (these have the decimal points omitted so, for example, ’76’ labels a comparison star of magnitude 7.6).