A Mira type variable star located a few degrees north of the ‘pointers’ of the Plough. 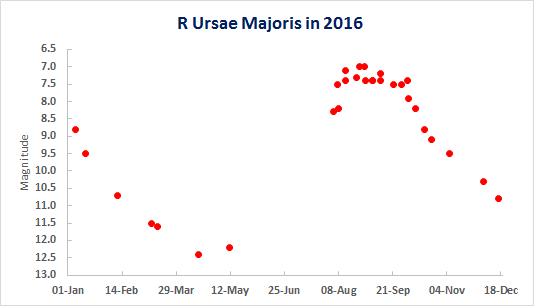 Like other Mira type variables, R Ursae Majoris is red giant star. The brightness variations are mostly due to pulsations in its outer layers. However, the brightness doesn’t rise and fall at a constant rate because as the star’s surface cools during the expansion phase, some very simple molecules are able to form and these absorb some of the light being emitted. When the surfaces warms again during the contraction phase, these molecules split apart.

The finder charts which follow show the location of R Ursae Majoris.

The first shows its general location relative to the stars in the ‘bowl’ of the Plough:

The second chart, which is approx 7 degrees by 4 degrees, shows the area close to R UMa is more detail.