One of the brightest Mira type variables, going up & down in brightness every 7.5 months. 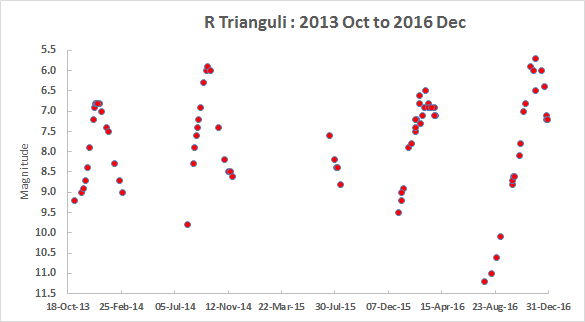 Like other Mira type variables, R Trianguli is a red giant star whose brightness variations are due primarily to pulsations in its outer layers but also, to a lesser extent,  to the formation and destruction of very simple molecules in its (relatively) cool outer layers.

Also, as for other Mira type variables, the brightness changes don’t repeat from one cycle to the next. The brightness at maximum changes from one maximum to the next and there is always an uncertainty of around +/- 2 weeks in any predicted dates of maxima.

There is a gap each year when R Trianguli is near conjunction and not visible in the night sky. This runs from mid April to mid June and was responsible for the 2015 maximum being missed in the above light curve.

The finder charts which follow show the location of R Trianguli.

The first shows the wider view and labels some of the brighter comparison stars with their magnitudes (with the decimal points omitted). Thus, for example, ’63’ labels a comparison star of magnitude 6.3.

This second chart shows comparison stars suitable for when viewing R Trianguli using binoculars. These are labelled with their magnitudes (once again with the decimal points omitted). Thus ’87’ labels a comparison star of magnitude 8.7.