A star which over the year fluctuates between being visible with the naked eye and being so faint that it is only visible using larger binoculars or a telescope. 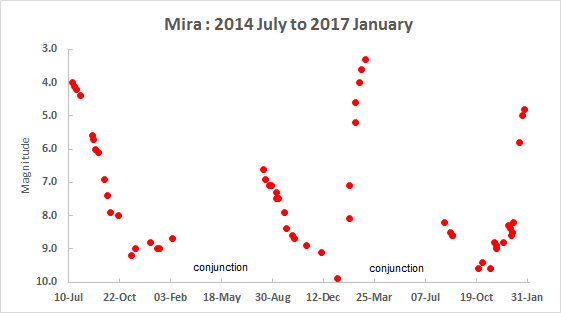 The brightness variations of Mira were first recognised in 1596. However, it was not until several decades later that observers realised that it was going up and down in brightness every 11 months.

Note the steep rise towards maximum, with Mira brightening at one stage by several magnitudes in just a few weeks.

As can be seen, there is an annual gap during the spring and early summer when Cetus is in conjunction with the Sun and therefore Mira is not observable from the UK. Recent maxima had been occurring during this spell, but we came quite close to seeing the peak in 2016, with Mira reaching mag 3.3 by mid March. From 2017 onwards, maxima become visible again and over the years that follow will become progressively better placed in the evening sky. Minimum brightness is currently occuring around mid autumn.

Mira is the prototype ‘Mira type variable’.  It is a red giant star whose outer layers pulsate. These pulsations not only cause the star to expand and contract slightly, they also cause changing in its surface temperature. During the cooling phases, very simple molecules form and these them dissociate when the surface warms again. However, while they exist, they absorb some of the light being emitted by the star. Hence the brightness doesn’t rise and fall at a constant rate. These molecules cause ‘irregularities’ in the rise and fall.

The brightness changes don’t repeat exactly from one 11 month cycle to the next. Some maxima are brighter than others and the date of maximum can only be roughly predicted in advance.

The following finder charts show the location of Omicron Ceti. Both have north at the top.

The first shows the brighter comparison stars. The ‘V’ shape of the Hyades can be a useful pointer towards the location of Mira.

The second shows the comparison stars to use when Omicron Ceti is in the lower half of its brightness range.