The “prototype” Cepheid variable star, going up and down in brightness every 5.366 days in a very predictable way. 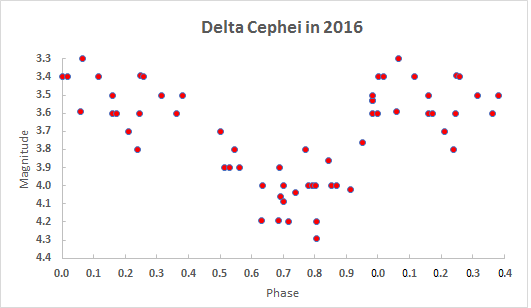 This light curve was created using all of the observations made by SPA VSS members during a single year.

For each observation, the phase (i.e. fraction of the 5.366 day cycle completed) of Delta Cephei was calculated. This might seem a daunting task, but you can do this for your own observations via this  helpful spreadsheet (which will also plot a light curve for you)

As can be seen from the resulting light curve, the rise to maximum is somewhat steeper than the fade back down to minimum. This is the case for the majority of Cepheids, There are exceptions to this pattern, however – one such exception is the star Zeta Gem (which also on the section’s programme) in which the light curve is more symmetrical.

Delta Cephei, like other Cepheid variables, is a yellow pulsating supergiant star whose outer layers pulsate in a very regular way.

Its brightness variations were first recognised in 1784 by the York-based amateur astronomer John Goodricke. Although it subsequently came to be regarded as the “prototype” Cepheid variable, it wasn’t the first Cepheid variable discovered – the brightness changes of Eta Aquilae had been discovered a few weeks earlier. However, Delta Cephei is better placed for observation from the UK and consequently it was Delta Cephei that was more closely studied.

The accompanying chart shows the location of Delta Cephei.

You can follow the brightness changes of Delta Cephei by comparing it with the lettered comparison stars.

Although Delta Cephei is generally described as being a naked eye variable star, the truth of that description depends on the amount of light pollution affecting your observing site.

At maximum, Delta Cephei will be almost as bright as comparison A.

At minimum, Delta Cephei will be slighty fainter than comparison E.

Mu Cephei is also a variable star. It varies in brightness much more slowly (and less predictably), typically varying over a range of about half a magnitude every two years.