A Mira type variable in the ‘neck’ of the Swan, that has a brightness range of over 10 magnitudes. 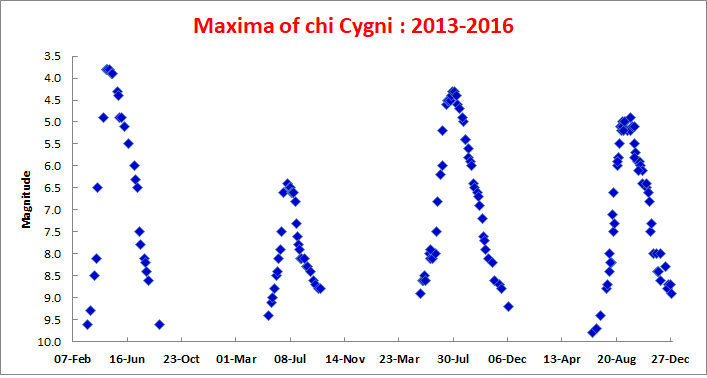 In May 2013, Chi Cygni reached an impressive magnitude of 3.8 when at maximum.

2014 brought a marked contrast with the early July maximum only reaching about magnitude 6.4 – possibly the faintest maximum since the discovery of the brightness variations of chi Cygni in the late 17th century.

As is the case for all Mira type variables, chi Cygni is a red giant star and the brightness variations are primarily due to pulsations in the tenuous outer layers of the star.

The brightness changes that we see are “enhanced” by the fact that during the course of these changes a sizeable part of the output of Chi Cygni moves to and fro between the infrared (which our eyes can’t see) and visible light (which we can see). If we could see both visible light and infrared, we would only see an overall change of about 1.5 magnitudes, but the transfer of output from the infrared to the visible increases this range to around 10 magnitudes.

The finder charts which follow show the location of chi Cygni.

The first shows the wider view and some of the brighter comparison stars that are suitable for naked eye observations.

This second chart shows the area around chi Cygni in more detail and labels several comparison stars suitable for use when observing using binoculars.