An eclipsing variable in which primary and secondary eclipses can be followed visually, as well as smaller scale brightness changes between eclipses. 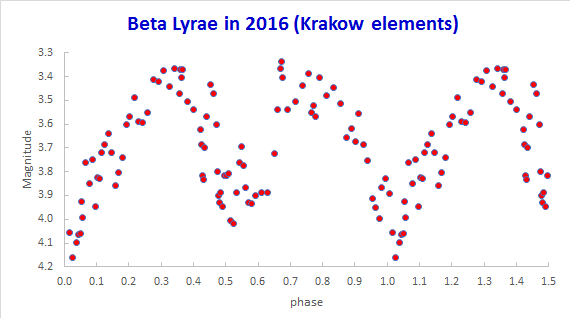 Although the brightness changes in Beta Lyrae were first recognised in the 1780s, astronomers do still not fully understand what is happening in this system.

Indeed, it is currently more than 30 orbits “behind” where it should be if predictions were made using the orbital period quoted in the General Catalogue of Variable Stars (GCVS)

The period changes are believed to be related to the transfer of mass between the two stars.

The brightness also varies slightly outside of eclipses because the two stars have distorted each other gravitationally – they have become egg-shaped, rather than spherical, and so their profile changes as the stars move around their orbits. Midway between eclipses, we see the egg-shapes “side on” and hence they appear slightly bigger than when we see then “end on” near eclipses. Consequently, Beta Lyrae appears brightest midway between eclipses and then has already started to fade before the eclipses actually start.

The finder chart in Figure 2 shows you how to locate Beta Lyrae.

You can follow the brightness changes in Beta Lyrae by comparing its brightness with that of the lettered comparison stars.

At its brightest, Beta Lyrae will be almost as bright as comparison A.

During primary eclipses, it will become almost as faint as comparison G.