A slowly changing variable star that is observable with the naked eye from reasonably dark observing sites.

With Alpha Herculis being a quite red star, magnitude estimates can differ by a few tenths of a magnitude between observers. Hence, rather than plot this light curve with magnitude values on the vertical scale (and risk confusing observers whose magnitude values don’t exactly match those shown) , the scale has been left blank.  Although some observers will routinely see Alpha Her brighter than will other observers, the hope is that each observer will see a similar pattern of rises and falls in brightness.

The finder chart which follows show the location of Alpha Herculis.

You can follow the brightness changes of Alpha Herculis by comparing it with the lettered comparison stars. 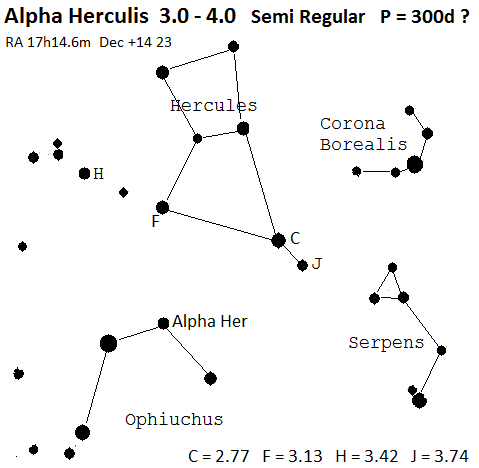