The Variable Star Section was formed in 1961.

In the 1960s, telescopes were somewhat more expensive in real terms than they are nowadays and little thought had been given to the possibility of observing variable stars using binoculars.

Since then of course, telescopes have become cheaper in real terms. A bigger difference however is that Variable Star observing groups have come to value the contribution that binoculars can make to variable star observing. A

Alongside this, however, light pollution has become more widespread and as a result many “naked eye” variables are barely visible (if at all) from the locations where most SPA members live.

The SPA VSS has amended its observing programme to take these factors into account.

Some of the original naked eye variables were soon dropped because they showed little or no regular variation in brightness and therefore were not interesting targets for newcomers to variable star observing. More have been dropped in recent years because the majority of section members now find it more convenient (and feasible!) to observe using binoculars.

How to “join” the Variable Star section

Anyone who submits observations is effectively a section member – there is no formal process for asking to join the section ! 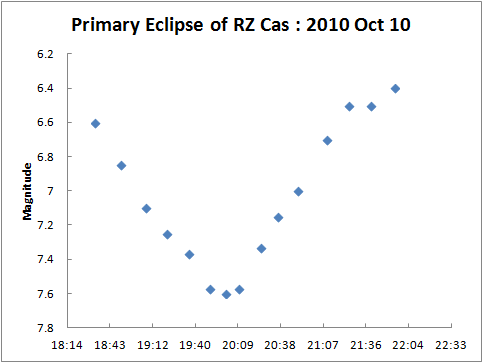 Observations received from members are combined into light curves – effectively, these are graphs in which the brightness of the star is plotted vertically and the time is plotted horizontally.

You can of course also plot your own by using spreadsheet packages such as Excel.

Reports are published on the section’s web pages and in the society’s bi-monthly magazine Popular Astronomy.

Which type of variable star is suitable for you?

Find out more in our guide Choosing stars to observe