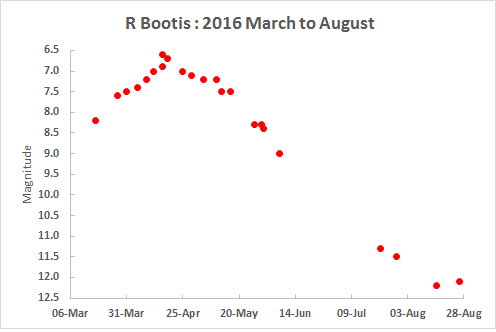 At the start of 2016, the Mira type variable R Bootis was rising towards its spring maximum.

As the accompanying SPA VSS  light curve shows, it had already reached binocular visibility by mid March. Maximum seems to have occurred in mid April and appears to have been somewhat brighter thn the average peak level of mag 7.2.

By June (when cloudy skies badly affected UK observers), R Boo was dropping below binocular visibility. In previous years, R Boo would have then been unobserved for several months. This summer, however, Don Matthews made a number of telescopic observations of R Boo which showed it to be near minimum brightness.

The next maximum, expected to occur in late November or early December, will be more of a challenge for observers. During September, Bootes is already descending towards the north western horizon by the time that it gets dark. Although it will linger on for much of the autumn, it will become less and less well placed. By late October, however, Bootes is emerging from the morning twilight and so from November onwards early risers should find R Bootis well placed for observation in the pre-dawn sky.