The Mira type variables R Serpentis and R Trianguli reached their 2017 brightness peaks at opposite ends of the summer.

R Serpentis has an average period of 357 days, which means that maxima occur about a week realier each year. The 2017 peak was predicted for early July. Observations indicate that peak brightness was actually reached in late June, a week or more earlier than predicted. The 2017 peak was around half a magnitude brighter than the 2016 peak and also slightly brighter than the long-term average of mag 6.9. 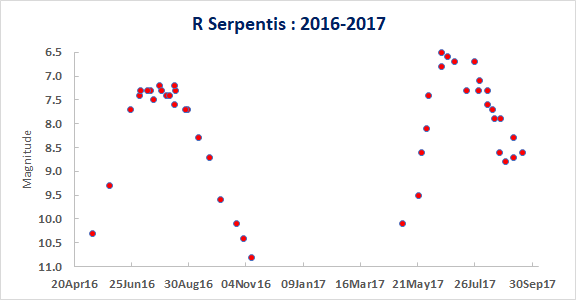 The next maximum of R Serpentis is predicted to occur in late June 2018.

R Trianguli has a shorter period of 266 days (just under 9 months). Having passed through maximum in early December 2016, the next maximum was predicted for the start of September 2017.  Observations indicate this latest peak brightness was reached about a week earlier than predicted and was slightly brighter than the December 2016 maximum, both peaks being brighter than the long-term average of mag 6.0. 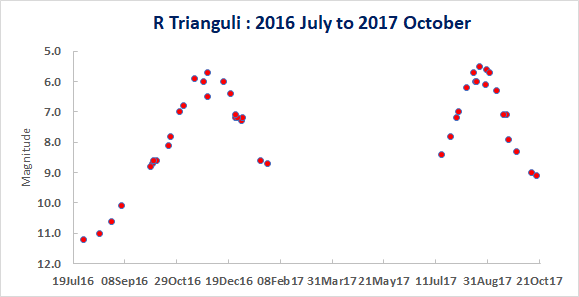 The next maximum of R Trianguli is predicted for May 2018. Unfortunately, this is at around the time when Triangulum is in conjunction with the Sun and so the maximum will be unobservable. it will probably be only just reaching binocular visibility when in disappears into the evening twilight at the star of April and will be well past maximum by the time that it emerges from the morning twilight in mid June. The best chance to see R Trianguli in binoculars during 2018 will be at the end of the year as it brightens towards its February 2019 maximum.