During the course of 2017, observations of Mira type variables have been submitted to the section by Don Matthews, Jonathan Shanklin, Tracie Heywood, Matthew Barrett and Bob Steele.

Here are light curves for five Mira type variables that have already reached their 2017 maxima: 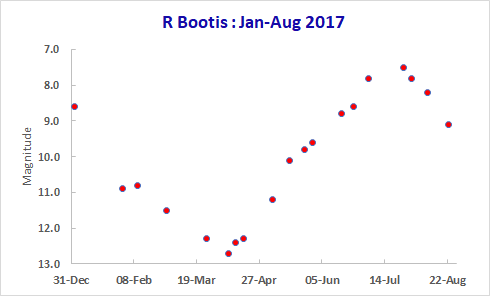 R Boo can be observed all year around, but the maxima that occur during the spring and summer months tend to be the most convenient for observation.

The start of 2017 saw R Boo fading from its late 2016 maximum. Minimum appears to have occurred during April, after which it brightened again.

Maximum was due to occur in mid-July and observations indicate that this did occur more or less on schedule. It is not possible to determine the peak magnitude from the available observations, but the indications are that it was close to the long-term average of mag 7.2.

The next maximum of R Bootis is predicted to occur in mid-February 2018. 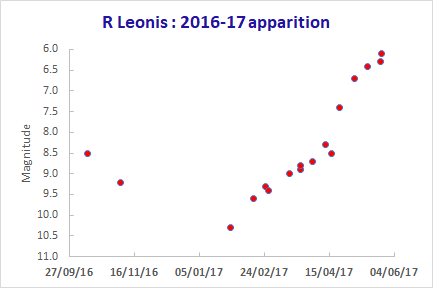 With R Leo being located close to the ecliptic, there will inevitably be some maxima that are unobservable due to Leo being near solar conjunction. This was certainly true of the 2016 maximum that was due to occur in late July of that year. The 2017 maximum was set to be slightly better placed, predicted to occur in early June, just as Leo was sinking into the evening twilight.

Following the minimum of early 2017, R Leo brightened, reaching binocular visibility by April. The final observation secured was at mag 6.1 on May 25th. Observation of R Leo is possible through to mid-June from more southerly latitudes, but those reported to the AAVSO suggest that peak brightness did actually occur in late May, a little earlier than predicted.

Leo is now emerging from the morning twilight and R Leo will be closing in on its 2017 minimum. The next maximum is due to occur in early April 2018. 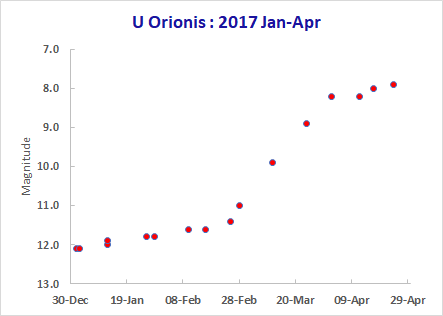 The maxima of U Ori are becoming increasingly tricky to observe as they occur around a week later each year and the maxima are now occurring just as U Ori is sinking into the mid-spring evening twilight.

The year started with U Ori close to minimum. There was only a very slow rise in brightness during January and February, but the rate of brightening picked up marked during March. The final observation reported, on April 24th, was of magnitude 7.9.

From more southerly latitudes, U Ori can be followed until around mid-May. Interestingly, these show little further rise in brightness during May, indicating that 2017 produced a maximum of U Ori that was much fainter than te long term average of mag 6.3.

The next maximum of U Ori is due to occur in early May 2018. This will be difficult to observe from the UK, but the later stages of its rise to maximum should be visible in binoculars during April. 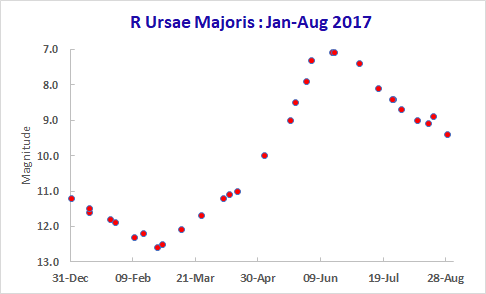 In early 2017, R UMa was a telescopic object, fading from its September 2016 maximum.

Observations indicate that minimum brightness occurred around late February, after which R UMa started to brighten, with the rate of brightening picking up during May.

Peak brightness appears to have occurred in mid-June, a little earlier than predicted. The peak magnitude looks to have been close to the long-term average of mag 7.2.

The next maximum is predicted for early May 2018, with Ursa Major well placed in the evening sky. 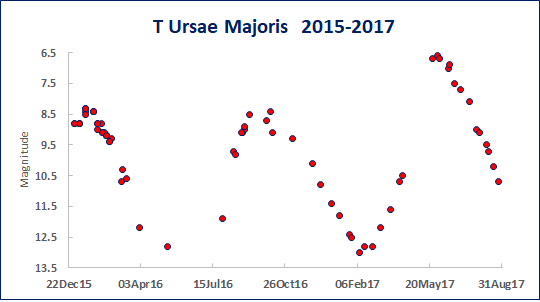 At the start of 2017, T UMa was approaching minimum.

Poor early spring weather hindered observations of the later stages of the rise to maximum.

T UMa was expected to reach maximum during June, but seems to have peaked several weeks earlier, in late May, somewhat brighter than the long-term average of mag 7.7, and close to the long-term upper limit of mag 6.6 that is usually quoted.

The next maximum of T UMa is predicted to occur in February 2018.