The Mira type variables U Orionis and S Ursae Majoris passed through maximum during spring 2016, with their brightness variations being followed by SPA VSS members 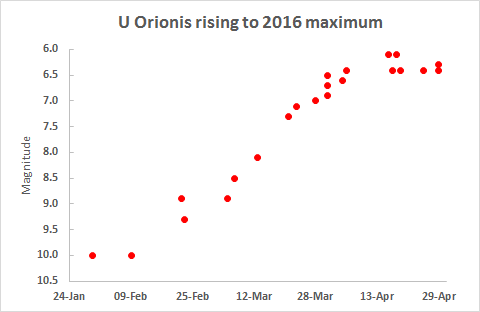 This Mira type variable has an extreme range of 5.3-12.6, but rarely approaches the upper limit. Most maxima seem to be around mag 6.5. As this SPA VSS light curve (based on observations by Don Matthews, Jonathan Shanklin and Tony Markham) shows, the 2016 maximum seems to have been at around this level.

Despite being in Orion, U Orionis actually lies quite close to the ecliptic near where Taurus meets Gemini, and is well distant from the bright stars of the main pattern of Orion.

The period of U Orionis is 372 days – which means that maxima, on average, occur approx a week later with each successive year. This can be a problem because U Orionis disappears into the evening twilight around mid spring and doesn’t emerge from the morning twilight yuntil early August. Hence maxima that occur during this gap are unobservable. We aren’t at that stage quite yet, but will be getting there by the end of this decade.

U Orionis is currently close to minimum brightness, but should become visible in binoculars again in March 2017.

More information about U Orionis can be found  here 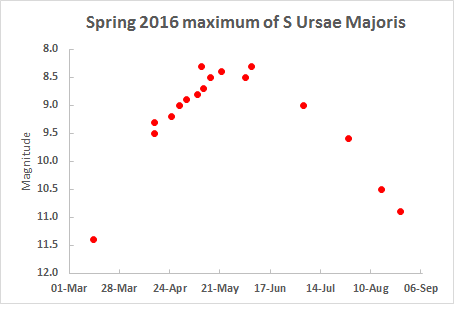 Although not as bright as U Orionis, S Ursae Majoris has the advantage of being circumpolar from the UK and is also reasonably easy locate, given its proximity to the bright stars of the Plough.

Although its catalogued range indicates that it can reach mag 7.2, most maxima fall around a magnitude short of this. The average interval between maxima is approx 226 days.

As this light curve, (based on observations by Matthew Barrett, Don Matthews and Tony Markham) shows, maximum brightness occurred during the late spring. Don continued to follow S UMa after it dropped below binocular visibility, seeing it drop to mag 11.3 by early September.

Following its September minimum, S UMa will be brightening again and is predicted to reach its next maximum around the end of the year.

More information about S Ursae Majoris can be found  here