Mira has an average brightness range of around six magnitudes. The average peak brightness over the years has been magnitude 3.6, but the brightest maxima can surpass this by nearly two magnitudes.  The average interval between maxima is approx 332 days – about 11 months.

The most recent maximum occurred in February 2017.  Mira then started to fade but was lost soon after in the evening twilight. By the time that it emerged from the morning twilight in late July it was closing in on minimum brightness. Minimum, at around magnitude 10.0, occurred in early October.  Mira then started to brighten.  At first, the brightening was slow, but the rate of brightening picked up during November.  With the next maximum predicted to occur in mid to late January, we can expect the rate of brightening to slow somewhat as maximum approaches.  Given, however, that Mira was already this bright while still a few weeks of its predicted maximum date, it could be the case that Mira is heading for an early maximum or for a brighter than average maximum. 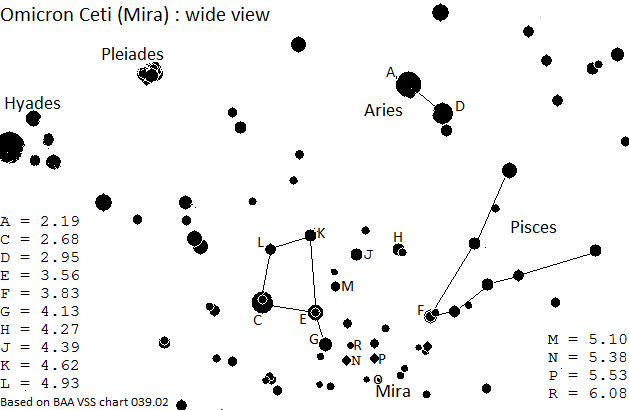 You can locate Mira using the accompanying finder chart.

Mira is located near to the head of Cetus (stars C, E, K and L).  It is in a relatively bland area of sky, but the “V” of the Hyades helpfully points towards it.

You can follow the brightness changes of Mira by comparing its brightness with that of the stars labelled with letters.

You can read more about Mira via  this guide