This report reviews the observations made of two eclipsing variables by SPA Variable Star Section members during 2017.

RZ Cassiopeiae and U Cephei are both Algol-type eclipsing variables. That is they are binary star systems which show large brightness changes during the primary eclipse (when the brighter star is eclipsed by the fainter star), but show no significant changes in brightness between eclipses. Both of these stars also have secondary eclipses (in which the fainter star is eclipsed by the brighter star) but the brightness changes during these are too small to be followed visually.

RZ Cas is usually listed as having a brightness range between magnitudes 6.4 (outside of eclipse) and 7.8 (mid-eclipse). 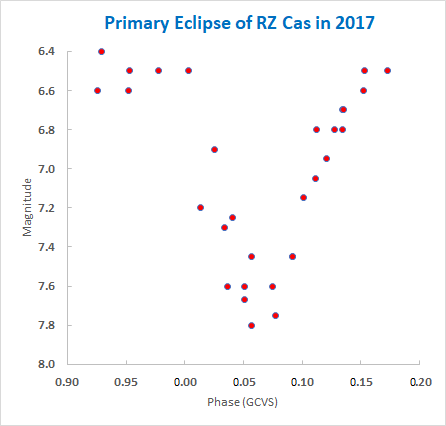 The interval between primary eclipses is approximately 29 hours.

Both light curves shown here combine the observations made of RZ Cas during 2017 into a single light curve showing the brightness changes around primary eclipse. The horizontal axis shows the phase – the fraction of the 29 hour cycle completed at the time of each observation.

In the first light curve, the phases have been calculated using the elements for RZ Cas given in the General Catalogue of Variable Stars (GCVS).

If the eclipses were occurring in line with these elements (which are over 30 years old), then primary eclipse would be centred at phase 0.

Clearly, the primary eclipse is shifted to the right, indicating that it is occurring later than would be predicted by the GCVS.

The shift to around phase 0.07 corresponds to the eclipse occurring around 2 hours later than predicted by the GCVS elements. 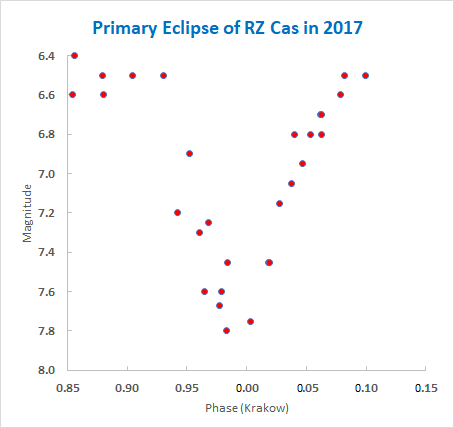 The second light curve shows the same observations, but with the phases calculated using more recent elements published by Mt Suhara Observatory, near Krakow.  These elements have been updated to take into account other eclipses observed during recent decades.

As can be seen, the primary eclipse is now centred much closer to (predicted) phase 0.

The discrepancy between the GCVS elements are recent observations has occurred because the orbital period of RZ Cas has changed slightly. The change involved is tiny, but adds up over the many eclipses that have occurred in the intervening interval. 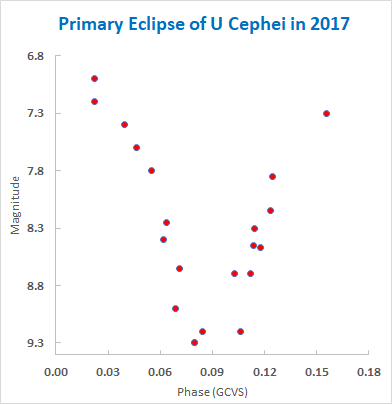 U Cep is usually listed as having a brightness range between magnitudes 6.8 (outside of eclipse) and 9.3 (mid eclipse). The interval between primary eclipses is just under 2.5 days.

Once again, all observations made during 2017 have been combined into a single light curve showing the brightness changes near primary eclipse.

The first light curve shows the brightness changes when plotted using the elements in the GCVS.

The light curve is “flat-bottomed”, indicating that U Cephei shows total eclipses. 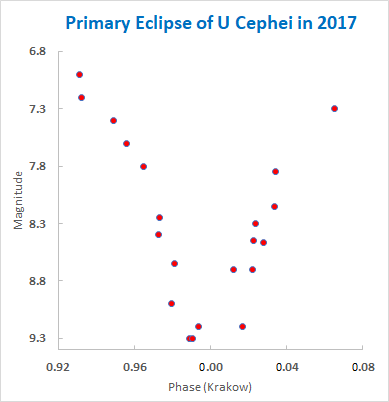 The second light curve shows the same observations, but with the phase calculated using the more up-to-date “Krakow” elements.

The primary eclipse is now located much closer to (predicted) phase 0.

The periods of eclipsing binaries are of course not fixed. They slowly evolve due to the effects of mass transfer between the stars and/or due to gravitational perturbations caused by a third star in the system. Hence there is always the potential for discrepancies between the predicted and observed times of eclipses even when using the most up-to-date elements.