What is a Variable Star ?

A variable star is quite simply a star whose brightness changes.

Some variable stars change in brightness by large amounts; others only show very small changes.

Some change very rapidly (over a few hours); others are more leisurely (taking years).

Some are highly predictable; others are totally erratic. In between lie many that are only predictable to a certain extent.

If you do not currently observe variable stars, we would, of course, encourage you to try it out. However, we realise that not everyone has the free time available or has regular access to a good view of the night sky. If you are merely interested in following the results obtained by other observers, you are of course also welcome. You can find recent reports via the Section Reports menu

How do you join the Variable Star section?  There is no formal process – anyone who submits observations is considered to be a member of the section.

Reports based on observations received are also published in the SPA’s bi-monthly magazine Popular Astronomy. If you are not currently a SPA member, you are missing out on these SPA membership benefits

There are two main reasons why people observe variable stars:

– the other is a scientific reason – to help improve our understanding of the stars involved and why they vary in brightness in the way that they do. This could involve monitoring for outbursts of dwarf novae, could involve comparing the observed times of eclipses with the predicted eclipse times or might simply involve monitoring variable stars on a regular basis and hence adding to our understanding of their long term behaviour. Professional astronomers do not have the resources or the available telescope time to be able to follow the vast number (tens of thousands) of known variable stars and so are dependant on observations made by amateur astronomers.

A list of the variable stars on the programme of the SPA VSS can be found in our Programme Listing . You are, of course, free to observe and submit observations for any variable star whether it is in this list or not. This programme is merely a list of stars that we feel would be good choices for newcomers to variable star observing. Guides and Finder Charts for these stars can be found by clicking on their names in the Programme listing.

How can you make observations of variable stars?

The section also has its own Facebook page: https://www.facebook.com/SPAVSS

Why do stars change in brightness?

Explaining that is the challenge for professional astronomers. In some cases, the changes are merely due to eclipses; in others they are due to pulsations in the outer layers of the star; in others the cause can be more “explosive”.

Some prove quite a challenge.

Here are light curves that have been published for two somewhat ‘unique’ examples: 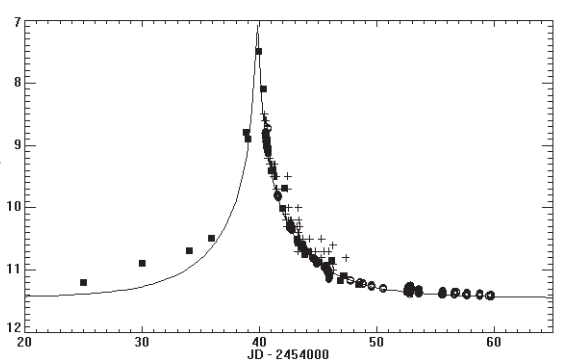 The first is for “Tago’s variable”, also known as GSC 3656-1328, a perfectly normal star of magnitude 11.4 that brightened sharply over around 10 days in late October 2007, reaching a peak brightness of about mag 7.5 on Oct 31 before fading back to normal over the following 10 days.

Nothing unusual happened in the star’s spectrum at the time and no brightness changes have been seen in subsequent years.

The favoured explanation is that this was a ‘microlensing’ event, with the brightening being caused by a low mass  object crossing our line of sight to the star.

More information can be found in  BAA VSS Circular 130 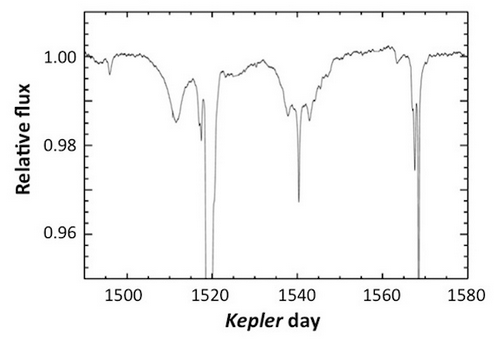 The second is for “Tabby’s star”, also known as KIC 8462852, an 11th magnitude star whose unusual light curve was detected by the Kepler spacecraft.

There have been many sensationalist articles written on-line suggesting that the brightness changes relate to an alien megastructure orbiting the star.

A more likely explanation is that the dips are related to scattered material surrounding the star, such as a cloud of comets or asteroids, resulting from the break up of a planet. However, the exact nature of such material remains unclear.

Starspots seem unlikely as these would reappear at regularly intervals due to the star’s short 0.88 day rotation period.

Another suggestion has involved dense globules of interstellar dust along our line of sight to the star.

Other ‘oddballs’ have been explained. Below is a set of images showing the evolution of light echoes from dust around the star V838 Monocerotis, a previously unremarkable star that increased dramatically in brightness in early 2002 before fading away again a few months later. An overview of what happened and suggestions as to why can be found in http://www.aavso.org/vsots_v838mon 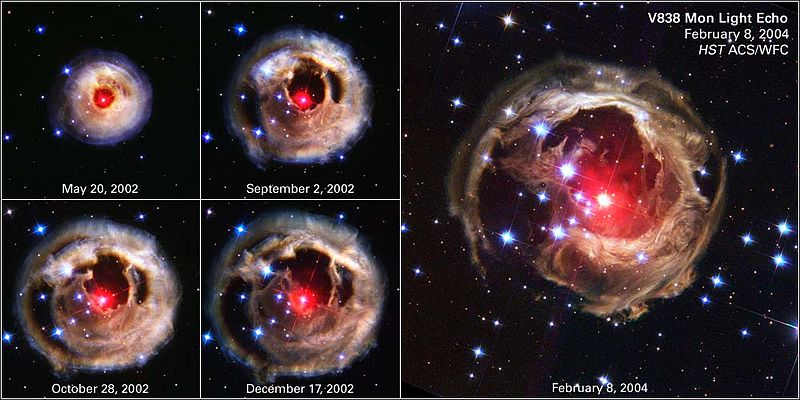