This was an excellent period of observation for the section with several periods of settled weather allowing better than average seeing conditions over much of the country. The main events were the coming to opposition of Saturn and Jupiter on the 2nd and 20th August, plus that of Neptune on 14th September. However I will start by mentioning visual observations of both Mercury and Venus by Tony Titchener. Because of their low altitude from the UK there was little to note for either planet other than their phase however the observations led to some discussion around the current confusion of Venus with Jupiter in the mind of the general public. I guess this is was due to the occasional mention of Jupiter in the media as it approached opposition. As a result any very obvious bright ‘star’ in the night sky had to be Jupiter right? Is it time to push for basic astronomy lessons in our schools, beyond the primary-school listing of the planets, or am I just becoming a grumpy old man?

Moving swiftly on I will mention the excellent Saturn sketches provided by David Graham. Around opposition-night people often report a temporary brightening of the ring system of this planet. The ‘opposition surge’, properly named the Seeliger Effect, is a real effect when the shadows cast by particles in the ring system are hidden from our point of view by the particles themselves, causing an increase in brightness per unit area of the rings. David reported the effect to be very obvious optically; sadly I have no other observations or confirmatory photographs from this particular opposition ‘though it has been photographed by the section in the past.

Some very good images of Saturn were taken through the period ‘though I struggled hard to get anything but poor seeing conditions at my own location. With the rings tilted well towards us and the northern hemisphere of the planet receiving all the sunlight David speculates it is time for a new large storm feature to emerge there. If so, this will first be seen by imagers using methane band filters and there is still plenty of time for observation in the period up until Christmas. 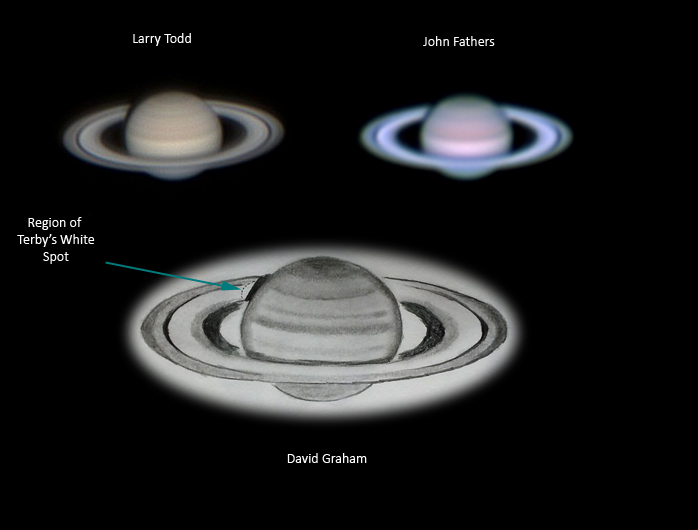 Another interesting optical effect at Saturn was bought up, again by David Graham, this being “Terby’s White Spot” and I must admit I had to research this as it sounded to me like a rather unfortunate skin disease. In March 1889 Belgian Francois Terby reported an obvious brightening of the ring systems bordering the black shadow that the planet itself casts on the rings behind it. This was confirmed by a number of renowned observers and accepted as a real, if unexplained effect. Interestingly observers couldn’t agree on the exact shape of the spot.

Today Terby’s white spot is considered an example of the ‘Mach Effect’ which is an optical illusion created entirely in the brain by the stark contrast between adjacent bright and dark areas. First described by Austrian Physicist Ernst Mach, the illusion creates bands of increased contrast at the border between these areas and is, apparently, a common problem for doctors examining X-rays and also a contributor to the creation of the ‘Black-drop’ effect seen during planetary transits of the Sun! Interestingly the photographic processing techniques of unsharp-masking and wavelet processing closely mimic this edge contrast effect making a spot or patch of increased brightness falsely appear in some images. The camera can, in fact, lie.

Moving on, the majority of observations received were of Jupiter and I will now try to summarize what has been on view. Firstly, I must mention an asteroid impact event observed on 13 September by a Brazilian amateur, shortly confirmed by other amateurs in Germany and France. More details have been published on the SPA website within the section’s ‘planetary news’ area of that site. The event occurred within the Equatorial Zone (EZ) at around Latitude 7deg south, L1 longitude 110 degrees. At the time of impact the Great Red Spot was rotating off the planetary limb and, just above it, the shadow transit of the moon Io was clearly visible approaching the limb; the flash lasted around 2 seconds and was very bright. No SPA observer has yet reported catching the impact, which, it is estimated, came from a dense object more than 10 metres across but which left no detectable scar on the Jovian cloud tops. 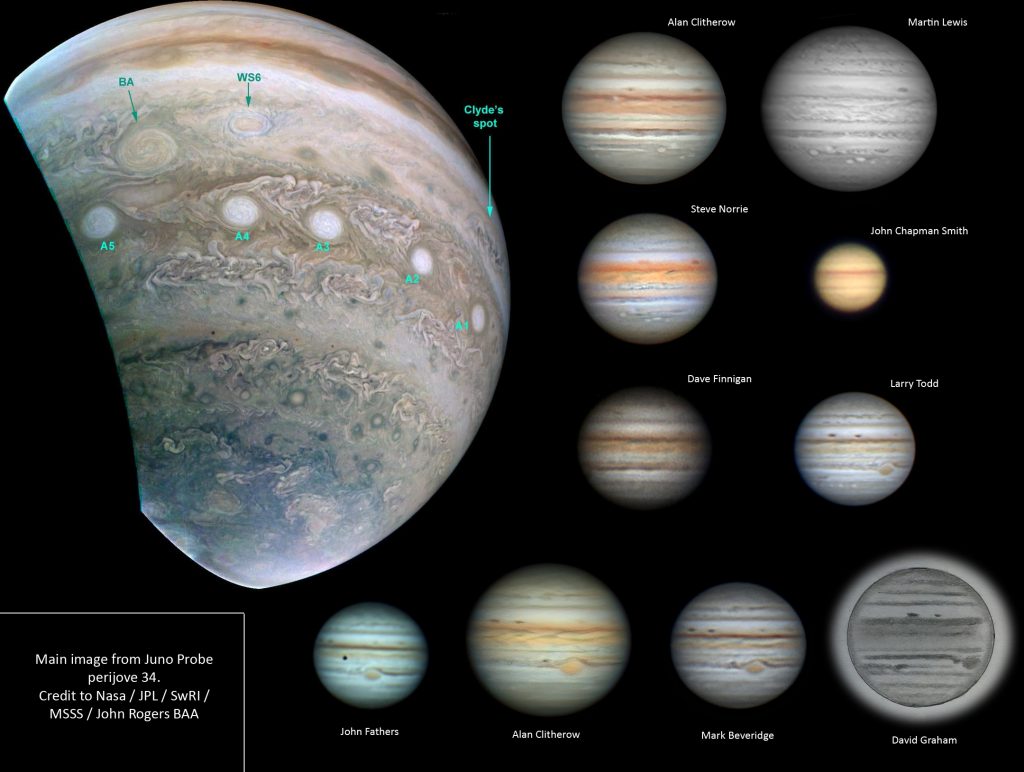 The EZ itself is slowly changing. In the spring it was fully coloured, instead of its more usual pale grey or white, and filled with obvious tawny or even orange-tawny cloud. Now the coloured region is slowly fading from the southern part upwards. This is most noticeable in methane band images in which the southern half of the EZ is unusually bright. It will be interesting to see if the EZ clears further this year. Festoon features within the zone were visible in some images but these were relatively pale and very thin when compared with last apparition. The section also caught a number of clear shadow transits during their observations, all these laying in or close to the EZ itself.

The Great Red Spot (GRS) continues to be obvious but quite small and pale rather than its previous deep red. A dark ‘eyebrow’ extends across the northern part of the spot, this being an extension of the dark southern edge of the South Equatorial Belt (SEB). This eyebrow became less obvious as the period progressed. Out of interest I used the techniques described in the last section report to estimate the size of the GRS using clear images from Larry Todd, Mark Beveridge, John Fathers and myself. This came out to be an average east-west size of 16,872Km; somewhat larger than ‘official’ estimates but I hope I can at least look for comparative changes over time to help keep track of this feature. The South Equatorial Belt (SEB) is pale and disrupted into multiple thin bands with just its southern-most edge showing as a dark band that is incomplete around the circumference but, as mentioned, making up the obvious eyebrow on the GRS.

Further south, including the South Temperate Belt (STB) and down towards the South Polar Region, there is a chain of 8 very obvious white oval storms, imaginatively named A1 to A8, traveling in the jetstreams a little south of Oval BA. These storms are visible in a number of section images which compare well with pictures assembled from those taken during the last perijove of NASA’s Juno probe. Oval BA is quite pale and has currently failed to interact with another storm feature, known as WS6, lying just north of it. This is a shame as it might have re-energised BA and darkened its colour.

Around 50 degrees prograde of WS6 the feature known as Clyde’s Spot has darkened and lengthened into a linear feature at the latitude of the STB. Other similar features are appearing around the planet and, may presage a general outbreak of the STB as the season progresses.
To the north of the EZ, the North Equatorial Belt (NEB) is marked by a thin and very dark southern edge blending upwards into a faint belt containing a number of very obvious dark barges. The waving activity at the northern edge of the belt, so obvious last apparition, is now largely gone with the pale ‘belt’ merging with the South Tropical Zone above it. White Spot ‘Zulu’ is particularly hard to find. The grey bands further north are largely unchanged with the North-North Temperate Belt (NNTB) quite dark if incomplete and there are at least two distinct northern white ovals. While these show well in methane-band images they are otherwise less obvious than their southern cousins. Overall Jupiter is dynamic and well worth watching into the autumn and winter.

The outer ‘Ice Giants’ were also observed with both Paul Brierley and Mark Beveridge taking images. Paul’s pictures show the moons Oberon and Titania around Uranus and also Triton around Neptune. No storm features have been seen by the section at either planet so far this observing season. 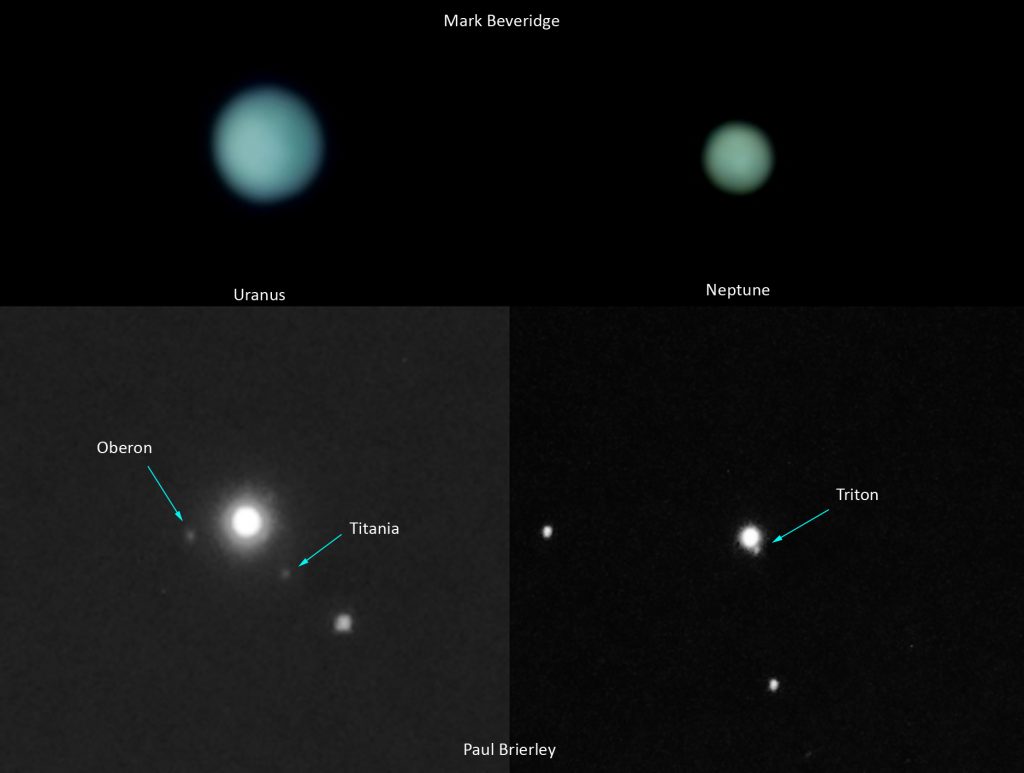 I don’t have space to list all the individual observations as they were sent in but I would like to thank Mark Beveridge, Larry Todd, Dave Finnigan, John Fathers, David Graham, Steve Norrie, Paul Brierley, Tony Titchener, John Chapman Smith, Keith Johnson and Martin Lewis for their excellent efforts and observations in this period.