An interesting piece of news for planetary observers.

On the evening of 13 September a number of planetary imagers observing Jupiter managed to capture a bright impact-flash within the Equatorial Zone of the planet at an approximate position of (L1) 110 degrees and 7 degrees south. The flash was visible for just a few seconds in video frames around 22:39 and 30 seconds Universal Time (23:29:30 BST).

At that time the Great Red Spot was rotating off the planetary limb and, just above it, the shadow transit of the moon Io was clearly visible approaching the limb. A number of UK observers may have been observing this shadow transit and if they were capturing video around this time they should check it carefully to see if they also caught the impact.

Currently the impact has been confirmed in images taken by Jose Luis Pereira from Brazil, Harald Paleske from Germany and J P Arnould in France as well as members of the Lorraine Astronomical Society; an image from Jose Pereira is included here. Many apologies if I have miss-spelled anyone’s name! You will note that his image was processed by Marc Delcroix who is an amateur who helps coordinate a network of observers studying videos containing suspected planetary impact flashes, using software they have developed. 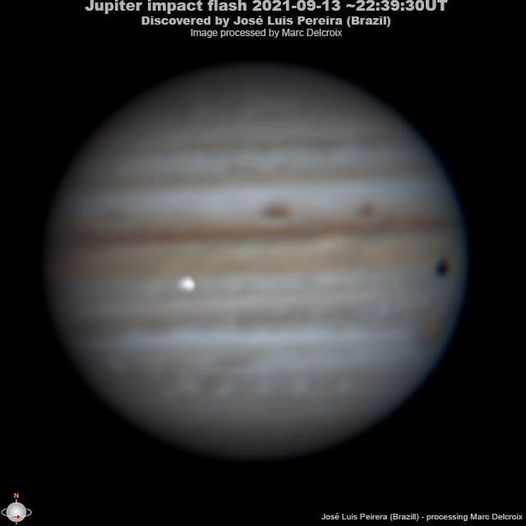 Having confirmed the impact, which was probably caused by a small cometary fragment or asteroid, amateurs are now asked to look for after effects of the impact, which may be fairly short-lived. Some previous impacts have left dark scars as soot clouds slowly disperse in the upper weather systems of Jupiter; no such scars have been seen at the time of writing.

It is suspected that there may be 6 or 7 such impacts on Jupiter each year but many may go unobserved. Given the relative size of Jupiter and Earth one can only hope such a large explosion doesn’t happen here any time soon.