This was a period with a small number of observations due to the lack of obvious planetary targets at sensible times. However some interesting observations were made which are worth noting.
Martin Lewis continues his excellent work recording Mars very late in the observing season. He managed to capture the red planet on two occasions in June, the 13th and the 22nd, by which time its apparent size had fallen to below 4 arcseconds across; approaching the apparent size of Uranus! Martin’s image from 13 June is really good considering the challenging conditions he reported; important features can clearly be seen. Of note is the extensive cloud visible from around 70 degrees north latitude showing the ongoing heating of the northern polar cap. Cecropia and the faint features of Nylosyrtis can be discerned to the north of the more obvious Syrtis Major. By 22 June there is much less to see, both because of the planetary presentation and because of the conditions but Martin must be applauded for the extreme efforts he is making. 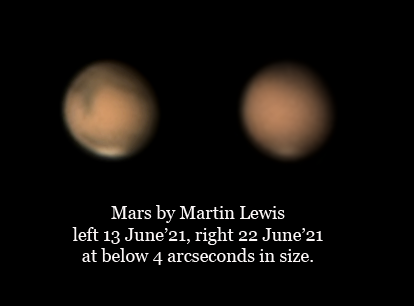 This can be extended to his work on Mercury. Greatest western (morning) elongation from the sun was on 04 July and around that time early-morning viewing was certainly possible; but the weather didn’t help. Instead martin chose later in July when a series of high-pressure regions gave us clear and settled weather. To counter the low-altitude of the target Martin observed and imaged Mercury much later in the morning when it was at an altitude of 61 degrees above the horizon; around 1121 UT. Naturally this was in broad daylight so all sensible precautions had to be taken to avoid damage to sensitive equipment and eyesight. Martin chose to image Mercury in the near infrared to counter the unsteadiness of the daytime atmosphere and he took some twelve videos of the planet with his monochrome camera, each a minute long, giving him a huge number of video frames to organize and process. In the end he combined and stacked the best 5% of these frames into his final result which is shown here along with a simulation of Mercury taken from the Winjupos freeware and from data taken from the Messenger probe. His results show a strong correlation in surface features with predicted and actual results. 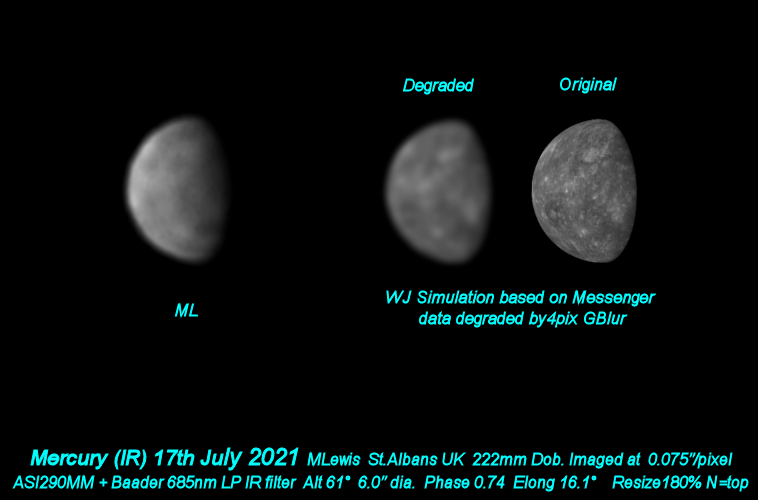 Moving on we had a small number of observations of Saturn and Jupiter. At my location both planets are low enough to be interfered with by a large tree, requiring me to move and re-align my telescope mount before observation is possible. My results were not very promising, on most occasions the view suffered with thermal turbulence from the unusual warmth we ‘enjoyed’ in this period. Larry Todd was rather better placed and in the period 11th to 13th July he took some excellent images of both Saturn and Jupiter. Saturn appears very crisp, the Cassini division very obvious for the entire expanse of the ring system. Surface markings show well defined bands and zones but with no distinct large-scale storm features visible. Although the dark north polar cap is well defined it does not show the hexagonal shape occasionally visible in the highest resolution images.

Larry’s Jupiter images have captured a remarkable collection of southern-hemispheric white storms below the thin and inactive South Equatorial Belt (SEB). It is possible these will interact in the near future, perhaps even coalescing into a larger and darker feature; their progress will be watched with interest. Steve Norrie caught Jupiter on the morning of 14 July, making a red, green and blue filtered false-colour image from his mono camera; this captures the current nature of Jupiter rather well. The equatorial Zone is still distinctly tawny or yellowish in colour while the SEB is very pale, bounded by a thin dark southern band. The NEB, in contrast, is darker and more obvious though seems much less active than during the last apparition. My own images from the 15th show the Great Red Spot (GRS) but were taken in poor conditions. In the end I had to combine infrared data and blue data to give a (very) false coloured image but one that shows the GRS at least in outline.

Mark Beveridge caught Jupiter on 17 July with the GRS just showing at the extreme limb as it starts its transit across the face of Jupiter; the thin banding and low levels of activity are obvious. Contrasting his one-shot-colour image with an IR one take shortly afterwards one can see striking differences, particularly in the NEB. In the methane band the Equatorial Zone has been reported to be very bright and I managed a single methane image from the morning of the 15th. This does show the EZ to be bright; indeed it is more obvious than the GRS itself, usually something of a spotlight in the methane band. 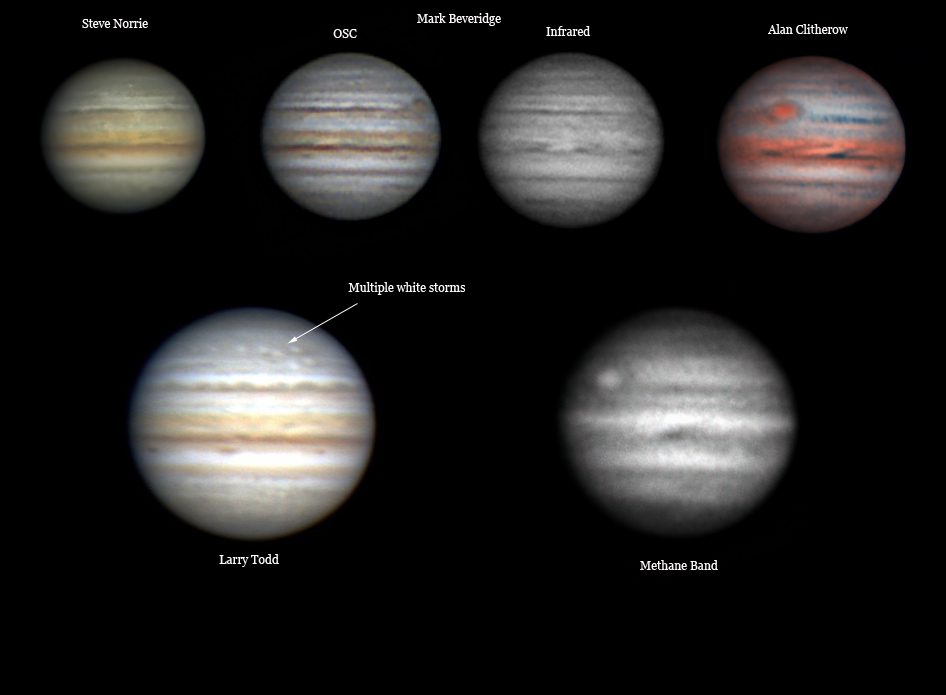 A number of people have been attempting to estimate the size of the GRS for themselves recently, to see if they can detect or confirm any continued shrinkage in this feature. There are many ways of doing this, some are more technical or mathematical than others. As I am primarily an imager I prefer to use a simple but effective method whenever I have an image with the GRS straddling the central meridian (CM) of Jupiter; that is, placed very close to the centre of the planet from our point of view. I would emphasize all these methods will produce only approximate results for a number of reasons. Mathematically they are often based on spherical geometry however Jupiter is not actually spherical, rather it is slightly flattened into an ‘oblate spheroid’ due to the high centripetal forces felt at its equator, however the results will always be only slightly inaccurate and the important thing is to be consistent with measurement technique and to compare the results over time.

If the GRS straddles the CM then an image can be taken into almost any graphical software, rotated to be exactly north, or south, up and then the length of the planetary diameter at the equator, and the east-west length of the GRS measured by running the cursor over the picture and measuring the appropriate pixel count at each location. Since the actual Diameter of Jupiter is known and we have the measured length in pixels taken from the image for both equator and GRS, we can use simple ratios to determine the length of the spot east-west. I have borrowed an excellent image from Marc Delcroix taken in July with the GRS just touching the CM to use as an example. If the spot is any further away from the CM than this the ratios method becomes too inaccurate due to foreshortening of the view. In this example the spot measures 16921Km across. 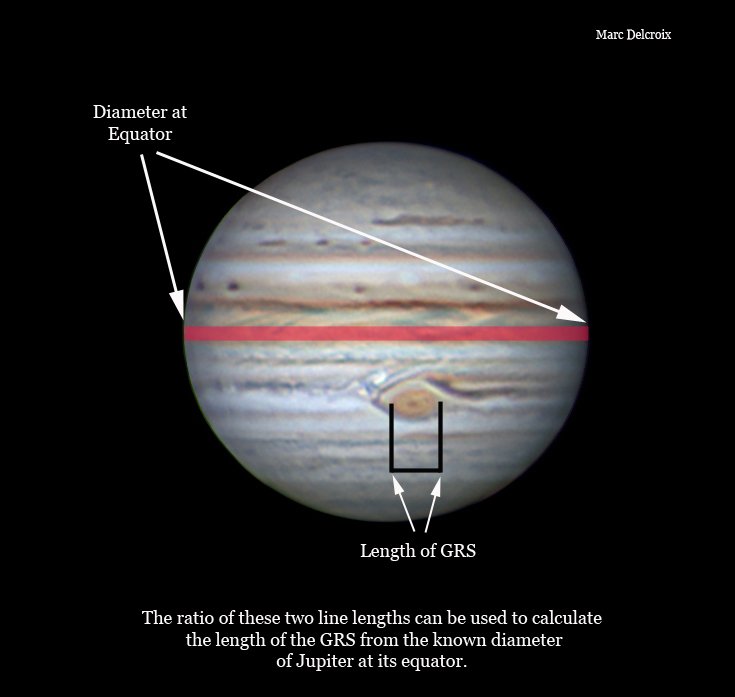 If the GRS is too far from the CM the image can be imported into the computer freeware Winjupos and measured and mapped onto a sphere therein. From this a map projection can be made and, again, when the Winjupos cursor is run over the map the exact length of the GRS can be measured in degrees of longitude. We need to use the L2 measure for longitude as it represents the correct rotation rate of Jupiter in the region of the GRS, ignore L1and L3 figures. Once we have this a little bit of maths gives us the length of the GRS.

GRS=1110 times the measured length of L2 in degrees. Using my own image from 15 July I measure the spot to be 15.2 degrees long, giving a size of 16872 Km. The constant ‘1110’ relates the known number of Km per degree of circumference to the latitude of the GRS, which never varies significantly from 22.2 degrees south.

Visual observers can do the same thing by carefully noting the exact time the leading and then the trailing edge of the GRS just cross the CM of Jupiter, best achieved with a reticule eyepiece. While graphical methods do exist it is easier to again use Winjupos for these exact times and dates and to note the amount of L2 rotation in degrees that occurs in this time. Doing so gives the length of the GRS in degrees and the simple equation above can again be used to find its size in Km.
I hope more people will measure the spot for themselves and send me the results in the next reporting period.