Disappointingly few good targets presented themselves to section observers in this period. Indeed the only really accessible evening planet was Mars and this was late in its current apparition. As a result, while still relatively high in the south-western sky, Mars was small; very small indeed! A few years back when planetary observation was largely visual rather than photographic, reporting of Mars in detail tended to stop when the planet’s apparent size fell below around 10 arcseconds in size.

To put that in context our glorious Moon subtends an angle, to us on the surface of the Earth, of around 30 Minutes of arc or half of one degree. If you are familiar with the crater Clavius on the southern part of the Moon then you may have glimpsed an arc of smaller craters crossing the floor of Clavius itself; the most central of these subtends an angle of around 10 arcseconds or 1/180th of the size of the full Moon when viewed from Earth. I hope we can agree that’s pretty small!
At the end of March Mars had fallen to very nearly 5 arcseconds in size and yet still some section members were able to record detail on its surface. To do this one needs exceptionally steady seeing conditions within our own atmosphere along with persistence and patience in order to be prepared for and to take advantage of those brief periods of excellent seeing. It has often been said that the three most important attributes that a property can have are location, location and location; for the planetary observer this is certainly true and it is no coincidence that Sir Patrick Moore chose Selsey Bill on the extreme south coast as the site for his observatories. There the prevailing south-westerly wind often has a smooth laminar flow off the sea and the cloud tends to form well inland behind the great man’s house! This gave him more ‘good’ observing nights than most of us can dream of in the UK.

Moving house is not an option for most of us so we have to make the best of what we have and both Martin Lewis and Mark Beveridge certainly achieved that. They both contributed a number of observations through February and March and some of these have been quite remarkable given the apparent size of their target. Martin is attempting to image Mars at least once per week until June, after which it will be lost in evening twilight. His first contributions came in early February and eventually covered the 3rd, 12th, 18th, 26th and 27th of that Month. Detail varied hugely with local seeing conditions but the images from the 12th and the 27th were exceptional, particularly the later date when Martin managed to capture detail on a disk just 6.4 arcseconds across that many of us struggled to achieve close to opposition when Mars appeared more than three times larger.

That image shows Terra Cimmeria with the tiny Sinus Gomer extending northwards towards the pale patch of Elysium Planitia, and hints of the frozen Polar Regions in the extreme north.

Mark Beveridge was observing for much of the period and managed to take advantage of good seeing, most notably on the 21st of February, however that seeing was very fleeting and Mark took a total of 14 image-sets before he caught one he was happy with. This shows cloud forming over the deep Hellas impact basin. The southern hemisphere of Mars is now well past high summer and this basin will eventually fill with cloud and frost, both of water and of carbon-dioxide, and will reflect enough sunlight to be mistaken for the south pole of Mars. In contrast Martin’s images show only a little southern cloud on Mars but does capture plenty towards the north pole, which is slowly tilting towards us as the relative positions of the planets change with the seasons. The tiny south polar cap is now completely invisible.

In March Martin sent images from the 7th, 19th and 24th taken with his large Dobsonian telescope and an ASI 224 one-shot-colour camera. Again seeing was very variable but on the 19th cloud at high southern latitudes, covering Argyre Planitia, is visible along with Xanthe Terra on the Central Meridian (CM) and Acidalia Planitia in the North. On the 24th he caught Margaritifer Terra on the CM with Terra Meridiani / Terra Sabaea very clear and with faint albedo features in the otherwise empty Arabia Terra region.

Mark Beveridge had worse seeing but remained very patient and made the best of it. On the 21st he captured a total of 13 video sets covering similar ground to that seen by Martin two nights before. Surface detail is less well defined but clearly identifiable, particularly the Valles Marineris and Xanthe Terra regions; extensive pale haze or cloud is visible near the morning terminator as the cold night side rotates into daylight. To achieve this image with Mars just 5.6 arcseconds in size Mark stacked just 650 frames of video from a total of 12376 in his best capture run. 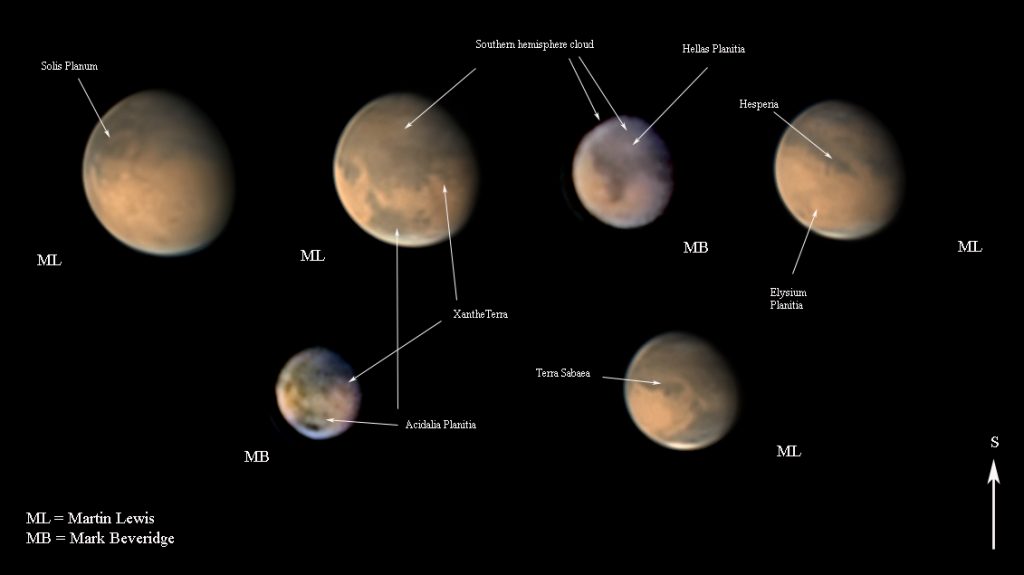 These were excellent results and show both patience and perseverance as well as technique but, sadly, represent the total of observations contributed to the section in a rather fallow period for planetary observation. We must now look forward to the summer when Jupiter and Saturn return to our skies and at a more reasonable altitude than during their last apparition. I look forward to seeing your work.