The term ‘Great Conjunction’ is given to the alignment of the planets Jupiter and Saturn, as seen from Earth; a Great Conjunction happens roughly every 20 years. December 21st 2020 saw one of the closest of these conjunctions since 1623 with the two planets being separated visually by just 6.1 minutes of arc, or about one-fifth of the width of a full-Moon. In contrast the next great Conjunction, on the 4th of November 2040, will see the planets separated by nearly 73 arc-minutes and there have only been, according to Wikipedia, four Great Conjunctions closer than 10 arc-minutes since the year 1200! This made the December event something pretty special. Unfortunately no-one bothered to tell the British weather.
To this date I have not been sent a conjunction picture or report from the great day itself; uniformly cloudy weather spoiled the event for many. I was personally fully set up in daylight and waiting for sunset from the 20th to the 23rd, hoping to catch a glimpse of at least something through any gaps in the cloud but gaps came there none! Other section members were luckier. After imaging Jupiter itself on the 17th of December, Mark Beveridge was able to capitalize on clear spells on the 20th and caught Jupiter sitting almost directly below Saturn at a time when their separation was 9.5 arc-minutes. He used an 80mm refractor and one-shot-colour (OSC) planetary camera, easily capturing the pair in the same frame. He put this conjunction in context by taking a wide-field picture with Jupiter and Saturn low in the south-western evening sky a little above a treeline.
A number of other observers were also lucky on the 20th with Shelagh Godwin using a smartphone to record the event sitting just above a neighbouring roofline. Geoff Elston used a camera to capture a zoomed view through tree branches that nicely framed the conjunction. Like Mark Beveridge, Carl Bowron and Martin Lewis were able to use planetary cameras to get close-ups of the pairing ‘though Martin had to go to some considerable trouble to overcome the limitations of his observing site regarding very low altitude targets. He built a special elevated platform to carry a 222mm Dobsonian and fabricated a metal piece to make his Atmospheric Dispersion Corrector fit what is not his usual planetary telescope.
Both Martin and Carl did catch the conjunction beautifully on the 20th while Mary and Mark McIntyre did the same on both the 19th and the 20th. They used a 70mm refractor and planetary camera mounted on a Star Adventurer Mini-Mount; this is designed for light-weight use with cameras and lenses but nonetheless they succeeded in capturing the scene including the positions of the Galilean Moons of Jupiter; as did Robin Scagell with both a telescopic view and another wide image nicely framed by trees.

Having gotten the conjunction out of the way I will turn to about Mars. After the great observing effort leading up to and just after the date of the opposition it is perhaps unsurprising that the number of Mars observations fell off noticeably into December and January but submissions did not stop completely. I was grateful to receive sequences of visual observations from Edward W Sawyer, David Graham and Alan W Heath giving summaries of their observations during this apparition dating from July right through and beyond opposition. All three observers sent some excellent hand-drawn images showing the major features on view along with details of seeing-conditions and the relative intensities of the various surface and atmospheric details as observed through a variety of filters. Of particular interest are hints of surface albedo features within Syrtis Major as seen by Edward in his drawings from September 6th and possibly September 1st and more obviously by David on the 5th of November. These were recorded photographically and reported on extensively in the last section report but Edward sent the first drawn submissions I have seen.
Alan Heath noted that he knew of “A drawing by JD Beish on June 27th 2003 (that) shows two shady features within Hellas”, and he went on to quote Jeffrey Beish as saying “Some surface details have appeared in Hellas Basin, especially the north-south halftone known as Alpheus and the faint dusky central patch, Zea Lacus”.
I have personally been observing Mars since well before 2003 but am unable to claim ever seeing or recording these features before the current apparition. It seems that Martian dust is not exactly in the form you or I might think of it to be. Rather than just fine sand, the component of it which can be lifted by the extremely tenuous Martian atmosphere is of very small particulate size, more comparable to cigarette smoke. The fact that major or global dust storms on Mars are sufficient to reveal or hide surface features tells us something about just how much of this fine dust there has to be. I suspect that if the atmosphere was noticeably thicker and captured more heat during the day, so many fine particulates would be lifted that we would be lucky to ever see anything of the surface!
Martin Lewis has prepared a very fine surface map of Mars compiled from a number of his 2020 images using the freeware program WinJupos. This image shows the faint features discussed here along with many others and is well worth studying. It is a demonstration of what is achievable with both skill and modern equipment.

Of the other photographic images sent in I will start with a pair from Steve Norrie from the very end of November and the beginning of December. These show a distinct terminator due to the reducing illuminated area of the planet, from our perspective, along with clear surface features, notably Acidalia Planitia and Terra Meridiani / Sabaea, however the tiny south polar ice cap is not resolved.
Martin Lewis added images from the 5th of December showcasing Hellas Planitia and Syrtis Major, and from the 27th capturing the Eye of Mars, Solis Planum, staring back towards the Sun; Olympus Mons is just discernible close to the central Meridian. In his images the ice cap is still visible on the edge of the morning terminator. There are hints of atmospheric haze particular towards the deep north. My own, noticeably less detailed, image from 2 days later shows some actual cloud formation from around 50 degrees north extending upwards over the most northerly visible area, just a little south of the site of the Phoenix lander. I was slightly distracted by a large visible swirl in the infrared component of this image, thinking it was a dust event originating at Xanthe Terra, but more knowledgeable heads pointed out this is a pale natural surface feature somewhat exaggerated in contrast by my image processing; rather disappointing! 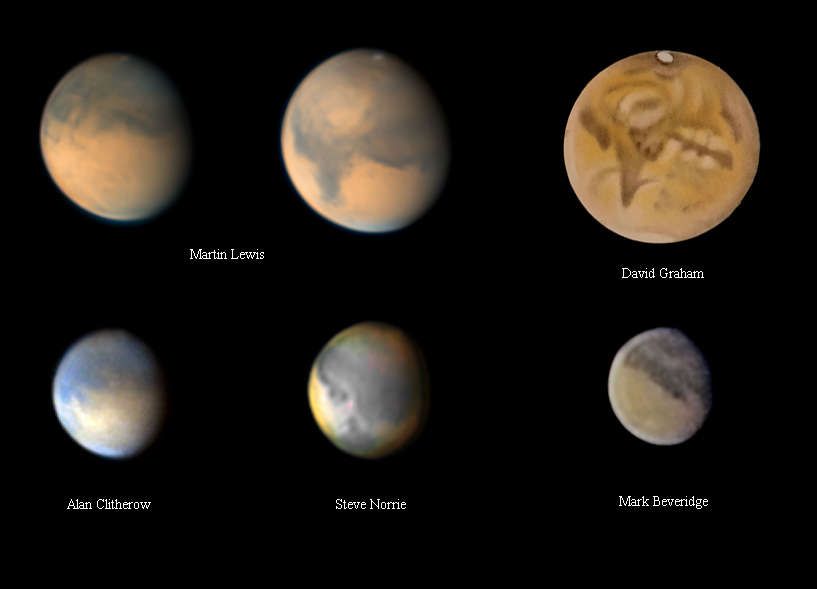 Into the New Year Martin Lewis contributed images from the 6th and 15th of January, by which time the apparent size of mars had fallen to just 9 arcseconds, along with a ‘Parade of the Planets’ showing his best individual images of all the planets he managed to target in 2020; very impressive work. His January Mars images confirm the cloud forming in the extreme north and still resolve excellent surface detail despite the now tiny size of Mars. Finally Mark Beveridge sent a pair of images from the 23rd, nicely showing Terra Cimmerium with hints of other features within the broad swathe of pale desert covering the North of Mars in this aspect.

With Mars approaching 5 arcseconds in size in the next reporting period I don’t expect many more detailed observations but it would be fun to see who can grab the last image of the apparition before the red planet is finally lost to the evening sky.
Alan Clitherow.