This was a very enjoyable period for planetary observation with lots going on. Venus was at its greatest morning (western) elongation from the Sun on the 13th of August and Jupiter was receiving a lot of interest with the Juno probe making a close approach, perijove 29, on the 16th of September and the Hubble space telescope making detailed observation on the 20th as part of NASA’s Outer Planets Atmospheric Legacy program (OPAL). In addition Neptune was at opposition on the 11th of September and Mars was becoming increasingly well placed. With this in mind the section members were very busy. The ‘Probably the Busiest Night of the Year’ award went to Mark Beveridge for his contributions from the 19th and 20th of September covering Jupiter, Saturn, Neptune, Uranus, Mars and finally Venus! It must be said that Dave Finnigan, the director of the deep-sky section, was not far behind with his multi-frequency observations of Jupiter, Mars and Venus from the 21st and 22nd.

The Venus images were taken in both the visual spectrum and infrared by Mark and the ultraviolet by Dave and show the sharp contrast in detail revealed by different filter bands. As expected dark absorption features appear in the UV while other frequencies show little more than shading and phase. Interestingly amateur infrared work above 800Nm has recently revealed recurrent linear cloud features deep in the Venusian atmosphere and, hopefully, section members might find these in the next period.

Mark’s infrared images of Uranus and white-light ones of Neptune reveal no surprises with a lack of storm features seen but more observations are needed to confirm this is a quiet opposition period for the ice giants. Saturn also showed little specific activity ‘though its low altitude from the UK meant resolution of small scale storms was impossible. Nonetheless beautiful images were made by Dave Finnigan, Dave Tyler and Mark Beveridge, while Larry Todd benefited from higher altitude views in New Zealand and was able to send detailed observations. 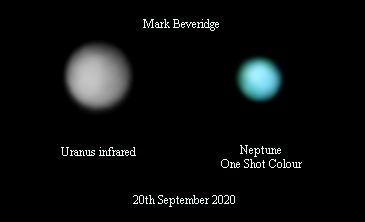 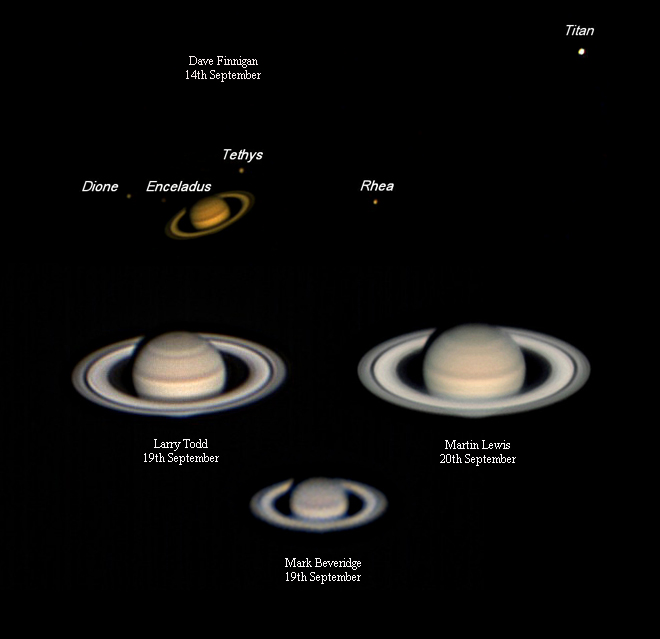 This brings us to Jupiter and Mars. Mars was beautifully placed while from the UK Jupiter was disappointingly low yet the two of them made up the bulk of observations. Larry Todd kicked things off with the first of a series of pictures of Jupiter staring on the 8th of August and continuing in considerable number throughout the period. Early images showed that the previously distinct ochre colour of the Equatorial Zone (EZ) was starting to clear in the south of the zone along with obvious wave activity in the EZ just above the South Equatorial Belt (SEB). Seeing was particularly good on the 14th and I took a group of Larry’s pictures and ‘de-rotated’ them in the free software Winjupos to place the Great Red Spot (GRS) close to the central meridian. This shows the GRS to be very red with a dark central concentration and outer annulus. 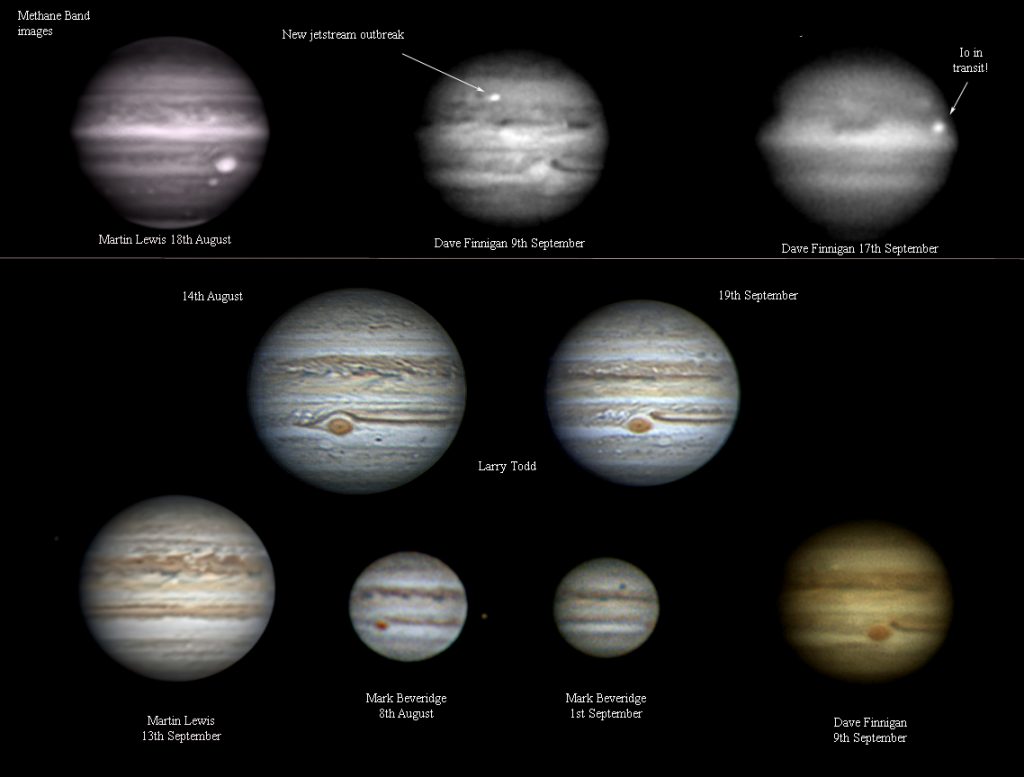 Oval BA is just below the GRS and is perhaps darkening a little; there is some speculation it may be regaining some red colouration. Time will tell. Martin Lewis’s images from the 17th and 18th of August confirm Larry’s observations, which is impressive given that Martin’s were taken at just 15 degrees of elevation. His methane image show the bright, high reflective cloud over the GRS and Oval BA but there is no longer any sign of the tiny ‘Clyde’s Spot’ in this region. On the 18th, somewhat out of the field of view caught by Martin, other amateurs found a single methane bright storm in the North Temperate Belt (NTB). This was followed shortly afterwards by two more. These features, imaginatively named NTBO1, 2 and 3 respectively, show an outbreak of the jetstream in this area. Dave Finnigan did manage to catch one of these on the 9th of September ‘though another seen on the 17th turned out to be a false alarm, being Io in transit!

Throughout September Dave Tyler, Larry Todd and Dave Finnigan were taking multiple images of Jupiter in the visual, infrared and methane bands with Mark Beveridge adding more from the middle of the month. These show the turbulence within and thickening of the NTB while another winjupos derotation of Larry’s work from the 19th shows the changes in the GRS region of the planet when compared with that from a month earlier. It’s unlikely there will be many more clear images of Jupiter taken in the next period, especially from the UK, but I would welcome any available to try and track further developments.

While Jupiter was declining to the west, Mars was growing ever more prominent, its apparent size increasing from 15 to over 22 arcseconds. Clear nights around the 8th and 9th of August allowed Mike Beveridge, Dave Hargreaves and myself to take some images of the red planet. I was comparing what could be seen with a 103mm refractor and a 190mm reflector while Dave Hargreaves took almost identical views with a 200mm Schmidt-Cassegrain (SCT). These show that small to medium sized telescopes work well on Mars even if ultimate detail was limited by the average atmospheric seeing conditions. Later on the 9th Mark Beveridge used a larger C11 to capture more detail during “occasional very good moments” of seeing; the chaotic region of Xanthe Terra and Valles Marineris are very obvious in these images. 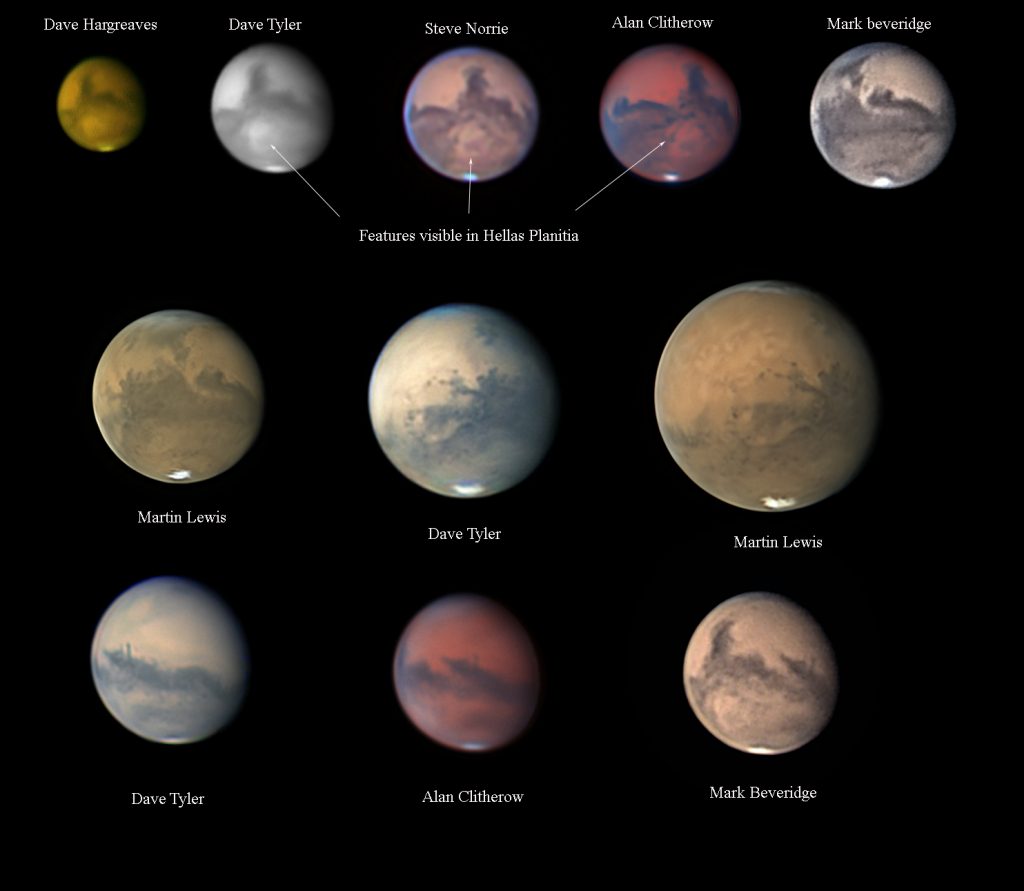 David Tyler added an interesting image on the 24th of August. Taken in monochrome using a near-infrared filter it shows the Syrtis Major region with the Hellas impact basin well-presented just to the south. I am used to seeing this basin as bright and featureless so I mistakenly took some dark features within it, clearly shown in Dave’s image, to be possible evidence of a localized dust storm. This is an example of seeing what you expect to see because the southern hemisphere of Mars is very much in ‘high-summer’; a time during perihelic oppositions which often produces significant dust activity.

It soon became clear my expectations were wrong. Later images of the region taken by Steve Norrie, Mark Beveridge and I also show these features clearly. A comparison with a detailed image from NASA and the JPL is difficult as most recent images are very large-scale close-ups. Older wide-field Viking era pictures do not show these features within Hellas so my best guess is that large areas of dust were moved during the global storms accompanying the 2018 opposition and some dark ‘bed-rock’ has been revealed within Hellas. These will disappear when winter returns to the south with the accompanying mists and frosts within the basin.

Dave Hargreaves produced the last image from August, taken on the 30th, then a flood of observations followed due to clear weather in the first week of September from Mark Beveridge, Steve Norrie, Dave Tyler, Robin Scagell and me. As mentioned above I have started experimenting with the Winjupos software and on the first of the month took a series of five video files through a near infrared filter and four through a blue filter over a period of around 30 minutes. Normally these could not be sensibly combined because the surface rotation of Mars within that period would not allow accurate alignment of features. By making 9 separate images in the normal way it is possible to create a single infrared and a single blue image all ‘derotated’ to exactly the same time using Winjupos. These two images can then be combined to make a false colour image of Mars at that specific time.

The process is not complicated and many clear online explanations of the software can be found. Its use is becoming widespread and images presented here by myself, Martin Lewis and Mark Beveridge, as well as Larry Todd’s Jupiter images, are made in this way. The advantage is the large amount of video that can be taken when freed from the time limitations imposed by the target’s surface rotation. Further observations from the 12th to the 21st followed and these have allowed me to show Mars in great detail over nearly a full rotation. Thank to everyone for all your work.

I must finish by mentioning that tireless and highly knowledgeable veteran amateur Alan W Heath. Despite recent ill health Alan has promised to send me his detailed notes on Mars later in the apparition. I look forward to reading these and I know we all wish him the best.