Mercury is often overlooked for observation so I’m pleased it started section contributions in June. The smallest of the planets reached its greatest eastern (evening) elongation from the Sun on the 4th when it was 9 arcseconds in apparent size and 24 degrees from the Sun. David Graham was able to follow Mercury through late May and up to the first of June through a period of seeing he described as the “best this side of the Millennium”. His beautiful observational drawings show the steadily decreasing phase and some surface albedo features as seen through W21 orange and W15 yellow filters and his 230 mm aperture Makzutov Cassegrain telescope. 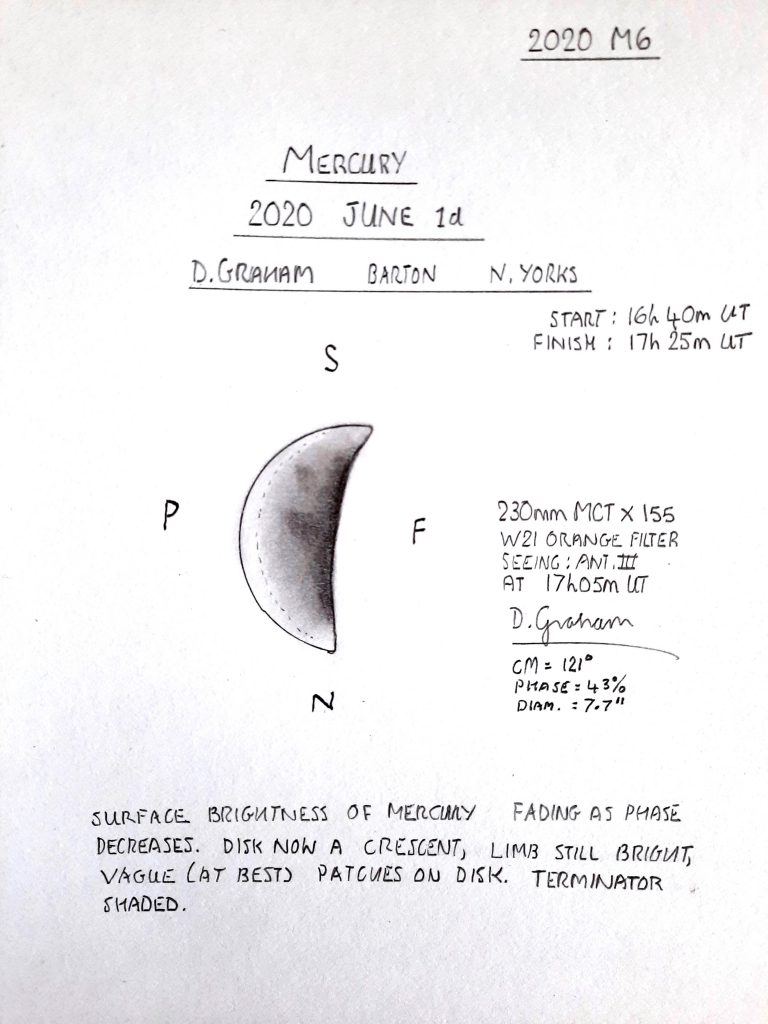 Venus then received attention as it moved from the evening and into the morning sky. Robert Steele sent in a summary of his evening observations as Venus drew closer and closer to the Sun. As mentioned last period he is looking for evidence of the Ashen Light, visible illumination on the dark side of Venus, but was unable to find anything conclusive. Venus was at inferior conjunction, between the Earth and the Sun on the 3rd of June and Dave Eagles managed to take a photographic history of its appearance as it approached and transited through conjunction. The images speak for themselves. This work requires great care to protect equipment and eyesight as the planet moves closer and closer to line of site with the Sun. The ‘closest’ image in the montage was taken on the 1st of June, a feat matched by Martin Lewis, who used a deep red filter, and Mark Beveridge who tried with both IR and colour filters.

At the time of Mark’s image, Venus was just 3.5 degrees separated from the centre of the Sun! He ‘stretched’ the bright parts of the image to show illumination of the deep Venusian atmosphere extending past both north and south poles. Because of the glare from the Sun, even with a glare-shield fitted, Mark resorted to fitting his telescope’s objective cover, removing its 52 mm sub-aperture cap, cutting both the total aperture and the resolution but bringing glare to acceptable levels. He hoped to observe even closer to conjunction in order to catch the bright Venusian atmosphere stretching towards a complete annulus but was stopped by several days of cloud.

With Venus and Mercury moving into the early morning sky, evening observers turned to the gas giants, Jupiter and Saturn which reached opposition on the 14th and 20th of July respectively. During this apparition a number of features on Jupiter have been followed carefully by the amateur community. The Equatorial Zone changed steadily in colour from predominantly white in 2018 to an orange-ochre colour in 2019 and has so far maintained this colour but the intensity seems to be fading. The dark markings often seen on the south edge of the North Equatorial Belt are now seen to be very dark and in places extend as festoons all the way to the equator. The NEB itself is undergoing a chaotic expansion, something it does every few years, stealing territory from the pale North Tropical Zone above it. In comparison the South Equatorial Belt is broken into a number of thin dark bands and a very prominent dark belt has moved past the Great Red Spot forming a rather quizzical ‘eyebrow’. 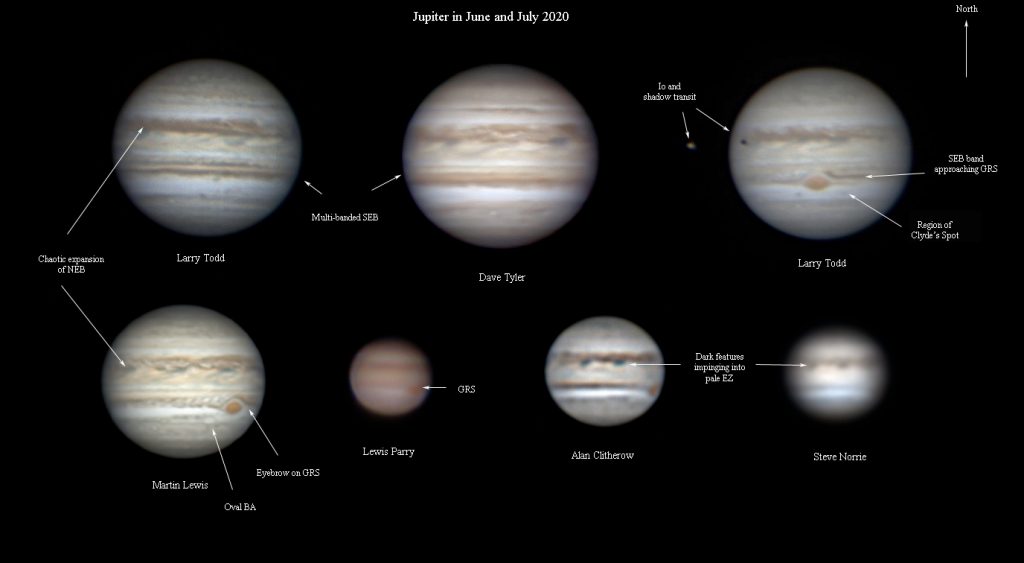 The size of the spot itself seems to be stable at the moment after a steady and noticeable fall in recent apparitions. In late May a South African observer, Clyde Foster, captured a new spot in the South Tropical Zone near the GRS and this was subsequently imaged by the Juno probe on its 27th flyby of Jupiter. This spot is indistinct visually but surprisingly bright in methane band images. Its study is yet another example of successful collaboration between amateur and professional astronomers.

I was fortunate to receive a good number of Jupiter observations, starting with Larry Todd, based in New Zealand, who submitted a series of images, all of excellent quality, with the first ones coming from the 6th and 7th of June. On the 23rd expert imager Dave Tyler photographed Jupiter just a little later than a newcomer to the section, Lewis Parry, who is experimenting with planetary imaging using a DSLR and a small TAL Newtonian telescope; I look forward to seeing more of Lewis’s work when available.

In July Dave and Larry continued to send in Jupiter images showing many of the features discussed above and they were joined by observations from Steve Norrie, Martin Lewis and me. Steve and I live within 15 miles of each other and have had to deal with the very low altitude of both Jupiter and Saturn during this apparition; we both achieved similar results on a target just 11 or 12 degrees above the horizon. We acknowledge our images are not terribly inspiring but they do still show the major features as discussed. Martin Lewis managed noticeably clearer images from his more southerly location using a large Dobsonian telescope on a tilting platform; this allows the Dobsonian to act as an equatorial mount for a period long enough to obtain outstanding captures.

Martin is experimenting with a new camera from the company ZWO using the Sony IMX462 colour chip. He sent several comparison images taken a few minutes apart using both the popular ZWO ASI224MC and the new ASI462MC colour cameras. For information, his impression is that the new camera produces blander colour images than the older one but is noticeably more sensitive. More importantly the built-in colour filters (Bayer matrix) are nearly transparent to infrared light. For normal colour pictures this makes it essential to use an infrared blocking filter with this camera but without one the ASI462 becomes very sensitive if you want to take infrared images. The methane absorption band at around 890 Nm in the near infrared is very useful for observing Jupiter, Saturn and potentially other targets such as the rings of Uranus; several filters are available for imaging within this methane band. Martin believes the IMX461 colour sensor is 2.5 times more sensitive at methane-band wavelengths than the highly regarded monochrome ASI290MM which is currently a very popular camera for methane imaging. 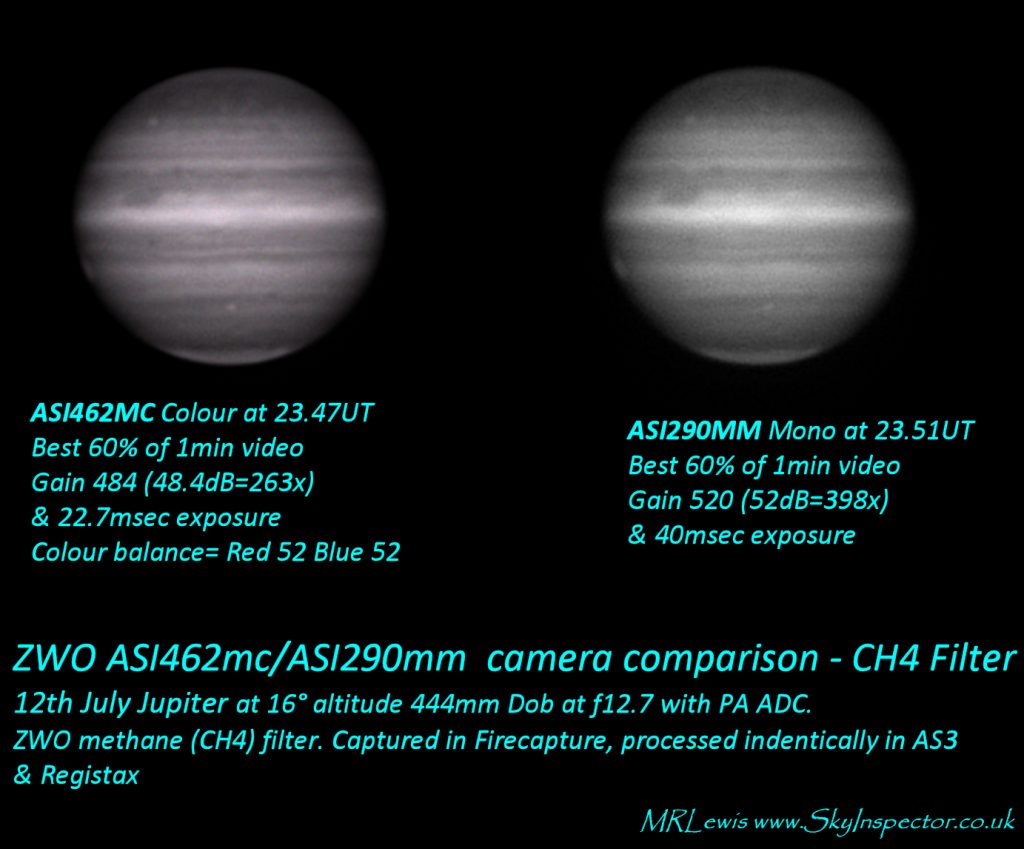 Addendum,
In mid-August an observation by an amateur, Isao Miyazaki of Japan, has shown a new bright spot in the methane absorption band that probably presages an outbreak of the North Temperate Belt at its southern edge. Continued observation of Jupiter is essential in the coming months to track the outbreak and I hope the section members will be at the forefront of these observations.

Martin provided side-by-side methane images from both cameras taken 4 minutes apart. Results are comparable but the new camera produced them from shorter exposures using less gain; advantageous in helping to freeze the seeing conditions. Martin also took methane images of Saturn so I will now move on to discuss the ringed planet. 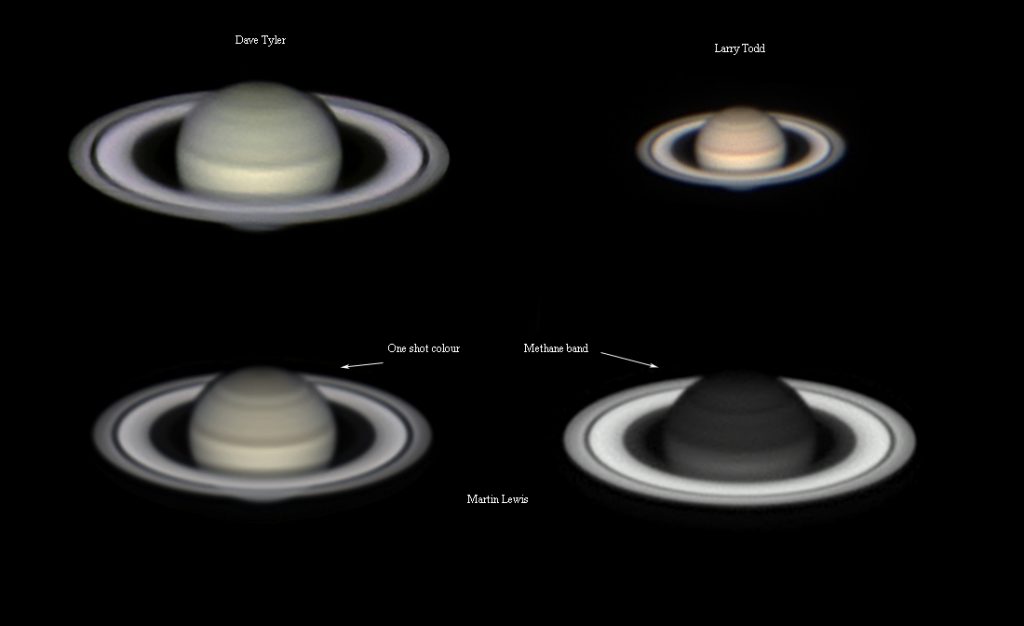 Larry Todd has been observing and imaging Saturn throughout the period. The rings are very well presented with the northern hemisphere on show and with multiple bands and zones recorded in his images. Similar results were obtained by Dave Tyler in June using both colour and infrared techniques. Martin Lewis also experimented with his new camera and a methane band filter on Saturn on the 13th of July showing the bright reflective rings and dark cloud tops. New storm features are often seen first in methane images (hence the discovery of Clyde’s spot on Jupiter) but nothing new is obvious here. Lewis Parry also attempted Saturn and I hope he is inspired to try Mars later in the season; by which clumsy Segway I come to the Red Planet.

Steve Norrie captured clear surface detail on the 19th of July showing the south polar cap, Syrtis Major and a chain of other features with the Hellas basin obvious and free of frost and cloud. Another newcomer, Dave Hargreaves, also imaged Mars successfully on the 31st , a first attempt with a 200mm SCT and showing a similar aspect to an image sent by Richard Boseman from the 30th of July. Richards RGB composite image captured at around 30 degrees of elevation with a C14 telescope shows how summer in the southern hemisphere has reduced the size of the southern ice-cap leaving it with a fragmented edge. Surface detail is very good with no obvious dust storms. This image hints at what we should all see in the next reporting period. 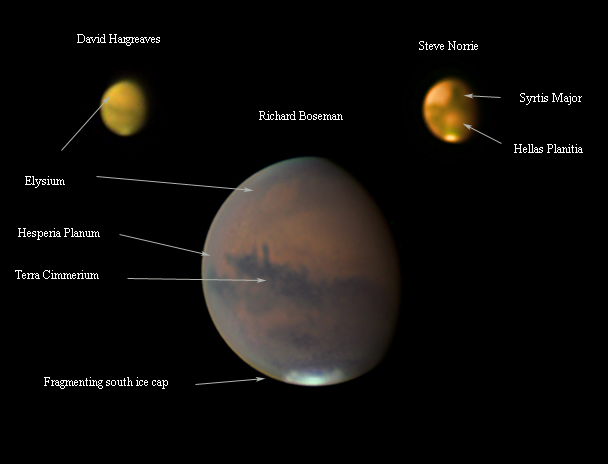